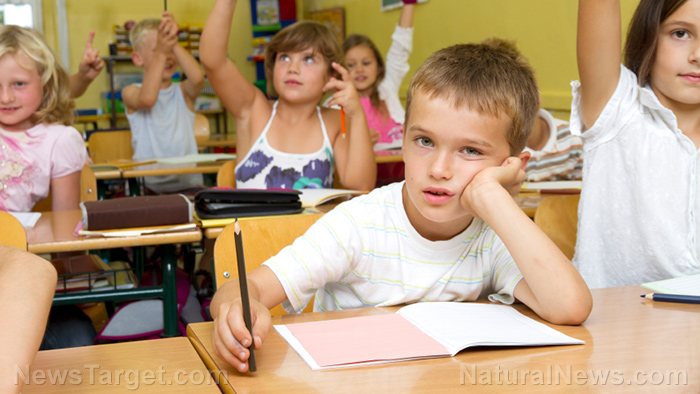 (Natural News) A substitute teacher was ejected from a school for failing to meow at a student during roll call who self-identifies as a cat. A normal student tells the substitute teacher that she “has to meow back at him because he self-identifies as a cat.” The teacher was flabbergasted and asked if there is a litter box in the classroom. The student leaped out of his (its) seat, as the teacher sarcastically barked “roof” at him, and the cat-boy scurried out of the classroom and headed to the office to report the insensitive indiscretion of the sub. That teacher’s reaction really must have rubbed the cat’s fur the wrong way.

Does the feline-student need a Covid shot since it’s not human anymore? It won’t need to wear a mask either

This is where the gender fluid movement has “moved” us. The country is under siege, as the Covid regime claims “science!” behind all the bad advice, and the gender fluidity flowing through the classrooms has absolutely nothing to do with science either. It’s all nonsense, and now teachers must endure, play along or be fired for not recognizing a boy who says he’s a girl, or a girl who says she’s a boy, or a kid who says he’s a cat, or a rat, or a spawn of Satan.

Plus, since the child/teen is no longer a human, they won’t have to bother getting those deadly blood-clotting Covid vaccines or wear a bacteria-breeding mask all day, since Covid is not transmissible to or from cats. And that IS actual science.

Still, any teacher who does NOT call a student self-identifier by their imaginary coding (gender and sexual preferences) will be fired on the spot and deemed a racist, or bigot, or conservative, or anti-vaxxer, or something. Whatever happened to the difference between fiction and real life? Watch this substitute teacher go off on video after the school told her to go home for taking roll incorrectly. Go to Rumble to watch the teacher rant.

Oh science. First scientists took salmon and mixed their genes with giant eels to make more Frankenfood salmon to sell the ignorant consumers on the conventional market, and to every restaurant in America. Then vaccines became byproducts of genetic engineering of viral strains and gain of function capability to hop from animals to humans. Now social media and “science” have convinced kids and teens that they should get operations to mutate their genitalia, and their breasts, and take hormone pills that cause cancer so they can grow facial hair, or boobs, and change their voice.

This is all supposed to be supported by every parent in the country at all times and at 100 percent compliance or you lose your job, without any say in the matter. You are tried in a court of mass media and your reputation is decimated. You failed social justice warrior academy, libtard school of logic, and the anti-science gender fluidity PC language society.

You have violated community standards if you do not believe girls are born with penises and boys with vaginas. You are no longer allowed to speak or post anything to social media ever again, as the psychotic Leftist (Big Tech) regime plows over and through everyone.

In Leftist-run states, cities and districts, if a teacher calls a boy a girl or a girl a boy who self-identifies as the other, it is grounds for termination, no regard to tenure or retirement benefits. Any child or teen can switch back to the other gender at a moment’s notice also, and if the teacher fails to recognize this even once, game over. This goes for children and teens who self-identify as cats, dogs, or wild chickens as well.

Tune into HealthFreedom.news for updates on schools and governments making US education a total farce while depriving students of oxygen so they can’t learn or even think properly.