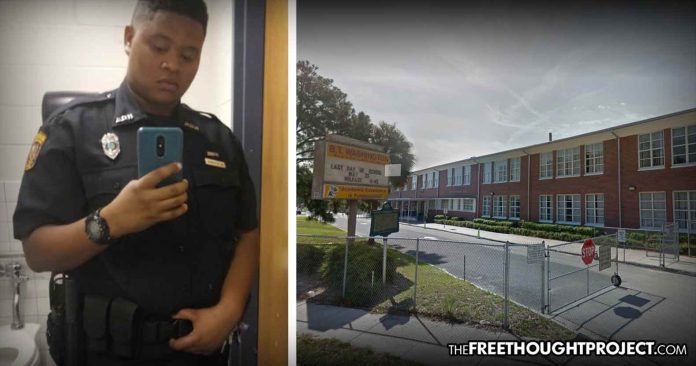 Tampa Bay, FL — Malcolm Curtis Tillman, a Tampa Bay school cop assigned to Booker T. Washington Elementary School, has been arrested and charged with sexual battery for blindfolding and then sexually assaulting a 6-year-old student in his care.

According to LEO Affairs, Tillman is a 22-year-old cop who reportedly believed the young girl was being sexually abused so he proceeded to investigate. Instead of interviewing the girl with a social worker present, or referring her to sex crimes detectives, Tillman reportedly took the small child to a so-called “game room” and sexually assaulted her.

Following the attack, the girl reported it to Tillman’s fellow boys in blue and led investigators to the room where she said Tillman told her to sit in a chair and put her hands behind her back. She said she was blindfolded by a black jacket, which covered her eyes and nose, and then the cop engaged in an undescribed sexual act. Investigators located the article of clothing which reportedly contained evidence corroborating her story.

Tillman was promptly arrested by Tampa police and charged with very serious crimes against the child which he was supposed to be protecting. Unfortunately, as TFTP has reported on numerous occasions, police officers rarely ever see the inside of a jail cell, even in situations which the school cop now finds himself.

LEO Affairs wrote of the incident:

Tillman denied the allegation but admitted he was alone with the girl in the room, the arrest report says. He told investigators he believed the girl was a victim of child neglect “and wanted to determine how safe she was at home,” according to the report.

Tillman’s semen was found on the fleece jacket, evidence which will surely be used against him in court.

“It wasn’t until physical evidence came back that supported her account and undermined his that we were able to make an arrest,” Hegarty said.

Following his arrest, Tillman was promptly fired and staff and parents notified of the arrest. Principal Jaime Gerding issued the following message to parents:

I am disgusted and shocked by this arrest…We trusted him to protect our students and staff and he broke that trust…As soon as we learned of the allegation, he was removed from our school while police investigated. He has now been let go by the district. The family of the student was involved in the investigation from the beginning.

While Tillman is certainly innocent until proven guilty in a court of law, he is currently being held without bail at the Hillsborough Count Jail. He is charged with sexual battery of a child younger than age 12.

The principal claimed that police do not believe there are other victims. However, child predators rarely strike just once.

Sadly, this is the second horrifying case, in only a few months, of a school cop betraying the ones he’s supposed to protect by sexually assaulting them.

Bastida met the young girl on a smartphone app called “Meet Me” where she reportedly sent the police officer nude photos. After a few days of online flirting, the police officer sent an Uber to pick up the girl on the night before he brought her to a nearby hotel where the girl says the officer raped her.

The girl says Bastida held her down and raped her despite her pleas for the police officer to stop. She says she told him she was only 12 but he continued. The two spent the night in the Guest House Hotel and checked out the next morning.

The Fairmont Junior High School student was reported missing by her family the Monday night before.

Police say they discovered the MeetMe app on her school issued iPad although school officials disputed the contention arguing the iPads are incapable of being used for such social media apps. Brown said what they uncovered led police to believe she was in “extreme danger”. He told reporters:

The conversations were similar to those we’ve seen in the past of pedophiles who try to lure children out of the house.

According to Chron, prosecutors are confident Bastida is their perpetrator and that the officer violently raped her, while filming the entire attack with his phone.

The girl told police that Bastida held her down by the neck and raped her, according to police records. She told him to stop, telling him she was only 12 years old, but he assaulted her again, the prosecutor said. The girl said that he filmed the entire incident on his cell phone.

These two cases are just more evidence school resource officers must be more highly trained before they’re ever allowed to be inside of a school. Just as with school teachers, there should be a higher standard for officers of the law who want to work with children.