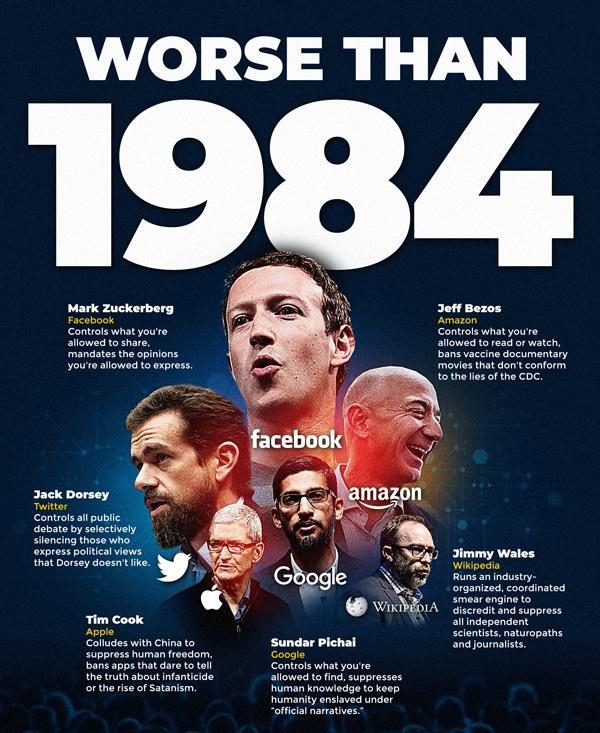 “If liberty means anything at all, it means the right to tell people what they do not want to hear.”― George Orwell

This is the slippery slope that leads to the end of free speech as we once knew it.

In a world increasingly automated and filtered through the lens of artificial intelligence, we are finding ourselves at the mercy of inflexible algorithms that dictate the boundaries of our liberties.

Once artificial intelligence becomes a fully integrated part of the government bureaucracy, there will be little recourse: we will be subject to the intransigent judgments of techno-rulers.

This is how it starts.

Martin Niemöller’s warning about the widening net that ensnares us all still applies.

In our case, however, it started with the censors who went after extremists spouting so-called “hate speech,” and few spoke out—because they were not extremists and didn’t want to be shamed for being perceived as politically incorrect.

Then the internet censors got involved and went after extremists spouting “disinformation” about stolen elections, the Holocaust, and Hunter Biden, and few spoke out—because they were not extremists and didn’t want to be shunned for appearing to disagree with the majority.

By the time the techno-censors went after extremists spouting “misinformation” about the COVID-19 pandemic and vaccines, the censors had developed a system and strategy for silencing the nonconformists. Still, few spoke out.

Eventually, “we the people” will be the ones in the crosshairs.

At some point or another, depending on how the government and its corporate allies define what constitutes “extremism, “we the people” might all be considered guilty of some thought crime or other.

When that time comes, there may be no one left to speak out or speak up in our defense.

Whatever we tolerate now—whatever we turn a blind eye to—whatever we rationalize when it is inflicted on others, whether in the name of securing racial justice or defending democracy or combatting fascism, will eventually come back to imprison us, one and all.

We should all be alarmed when prominent social media voices such as Donald Trump, Alex Jones, David Icke and Robert F. Kennedy Jr. are censored, silenced and made to disappear from Facebook, Twitter, YouTube and Instagram for voicing ideas that are deemed politically incorrect, hateful, dangerous or conspiratorial.

The question is not whether the content of their speech was legitimate.

The concern is what happens after such prominent targets are muzzled. What happens once the corporate techno-censors turn their sights on the rest of us?

We are on a fast-moving trajectory.

Already, there are calls for the Biden administration to appoint a “reality czar” in order to tackle disinformation, domestic extremism and the nation’s so-called “reality crisis.”

Knowing what we know about the government’s tendency to define its own reality and attach its own labels to behavior and speech that challenges its authority, this should be cause for alarm across the entire political spectrum.

Here’s the point: you don’t have to like Trump or any of the others who are being muzzled, nor do you have to agree or even sympathize with their views, but to ignore the long-term ramifications of such censorship would be dangerously naïve.

As Matt Welch, writing for Reason, rightly points out, “Proposed changes to government policy should always be visualized with the opposing team in charge of implementation.”

In other words, whatever powers you allow the government and its corporate operatives to claim now, for the sake of the greater good or because you like or trust those in charge, will eventually be abused and used against you by tyrants of your own making.

As Glenn Greenwald writes for The Intercept:

The glaring fallacy that always lies at the heart of pro-censorship sentiments is the gullible, delusional belief that censorship powers will be deployed only to suppress views one dislikes, but never one’s own views… Facebook is not some benevolent, kind, compassionate parent or a subversive, radical actor who is going to police our discourse in order to protect the weak and marginalized or serve as a noble check on mischief by the powerful. They are almost always going to do exactly the opposite: protect the powerful from those who seek to undermine elite institutions and reject their orthodoxies. Tech giants, like all corporations, are required by law to have one overriding objective: maximizing shareholder value. They are always going to use their power to appease those they perceive wield the greatest political and economic power.

Welcome to the age of technofascism.

Clothed in tyrannical self-righteousness, technofascism is powered by technological behemoths (both corporate and governmental) working in tandem to achieve a common goal.

Thus far, the tech giants have been able to sidestep the First Amendment by virtue of their non-governmental status, but it’s a dubious distinction at best. Certainly, Facebook and Twitter have become the modern-day equivalents of public squares, traditional free speech forums, with the internet itself serving as a public utility.

But what does that mean for free speech online: should it be protected or regulated?

When given a choice, the government always goes for the option that expands its powers at the expense of the citizenry’s. Moreover, when it comes to free speech activities, regulation is just another word for censorship.

Right now, it’s trendy and politically expedient to denounce, silence, shout down and shame anyone whose views challenge the prevailing norms, so the tech giants are lining up to appease their shareholders.

This is the tyranny of the majority against the minority—exactly the menace to free speech that James Madison sought to prevent when he drafted the First Amendment to the Constitution—marching in lockstep with technofascism.

With intolerance as the new scarlet letter of our day, we now find ourselves ruled by the mob.

Those who dare to voice an opinion or use a taboo word or image that runs counter to the accepted norms are first in line to be shamed, shouted down, silenced, censored, fired, cast out and generally relegated to the dust heap of ignorant, mean-spirited bullies who are guilty of various “word crimes” and banished from society.

For example, a professor at Duquesne University was fired for using the N-word in an academic context. To get his job back, Gary Shank will have to go through diversity training and restructure his lesson plans.

This is what passes for academic freedom in America today.

If Americans don’t vociferously defend the right of a minority of one to subscribe to, let alone voice, ideas and opinions that may be offensive, hateful, intolerant or merely different, then we’re going to soon find that we have no rights whatsoever (to speak, assemble, agree, disagree, protest, opt in, opt out, or forge our own paths as individuals).

We are almost at that point now.

The steady, pervasive censorship creep that is being inflicted on us by corporate tech giants with the blessing of the powers-that-be threatens to bring about a restructuring of reality straight out of Orwell’s 1984, where the Ministry of Truth polices speech and ensures that facts conform to whatever version of reality the government propagandists embrace.

Orwell intended 1984 as a warning. Instead, it is being used as a dystopian instruction manual for socially engineering a populace that is compliant, conformist and obedient to Big Brother.

Nothing good can come from techno-censorship.

Censorship power, like the tech giants who now wield it, is an instrument of status quo preservation. The promise of the internet from the start was that it would be a tool of liberation, of egalitarianism, by permitting those without money and power to compete on fair terms in the information war with the most powerful governments and corporations. But just as is true of allowing the internet to be converted into a tool of coercion and mass surveillance, nothing guts that promise, that potential, like empowering corporate overlords and unaccountable monopolists to regulate and suppress what can be heard.

As I make clear in my book Battlefield America: The War on the American People

, these internet censors are not acting in our best interests to protect us from dangerous, disinformation campaigns. They’re laying the groundwork to preempt any “dangerous” ideas that might challenge the power elite’s stranglehold over our lives.

Therefore, it is important to recognize the thought prison that is being built around us for what it is: a prison with only one route of escape—free thinking and free speaking in the face of tyranny.

Constitutional attorney and author John W. Whitehead is founder and president of The Rutherford Institute. He is the author of A Government of Wolves: The Emerging American Police State and The Change Manifesto.
(Visited 2 times, 1 visits today)
Share
Tweet
Share
Pin