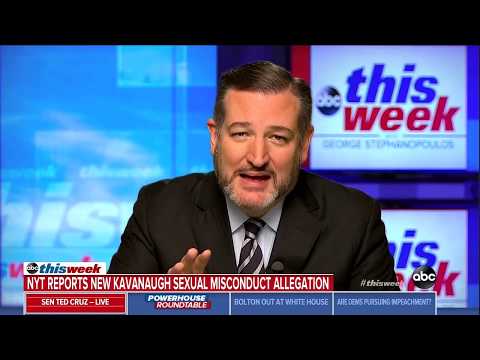 “If Republicans abandon the Second Amendment and demoralize millions of Americans who care deeply about Second Amendment rights, that could go a long way to electing a President Elizabeth Warren,” Cruz said.

Sen. Ted Cruz (R-Texas) discussed the contentious issue of gun control with George Stephanopoulos on ABC’s “This Week” Sunday morning, acknowledging that something should be done, but disagreeing with what his Democratic colleagues are proposing:

"We absolutely need to do more. We need to strengthen background checks … we've seen too damn many of these [shootings] in the state of Texas… Now the question is what do we need to do that actually works," Texas Sen. Ted Cruz tells @GStephanopoulos https://t.co/JgtJM6UwxW pic.twitter.com/a6vLHHoooG

The policies they are putting forward would not have stopped any of these mass murders?

Cruz went on to reiterate what many have pointed out: everything the anti-Second Amendment Democrats have proposed wouldn’t have prevented any mass shootings. In their zeal to posture for the media, Democrats ignore reality and keep putting forth weak policy ideas that punish only law-abiding gun owners and enthusiasts.

He argued for the proposal he first introduced in 2013 with Sen. Chuck Grassley, which the two re-introduced in May. While it doesn’t enact universal background checks, the legislation aims to strengthen the current system by prosecuting those with a criminal history who lie on background check forms and criminalizing straw purchases.

Cruz told Stephanopoulos that the proposals Democrats are backing may be “just a ploy to take your guns away.

He also cautioned fellow Republicans about overreacting to the problem of mass shootings:

“If Republicans abandon the Second Amendment and demoralize millions of Americans who care deeply about Second Amendment rights, that could go a long way to electing a President Elizabeth Warren,” Cruz said.

Ted Cruz on background checks on all private gun sales: "The only way to enforce that is a federal gun registry and a gun registry is the step you need for gun confiscation…the federal government should not be confiscating guns from law abiding citizens" https://t.co/8lclkYCVdR pic.twitter.com/UqqrJxJSeI

Many Trump voters are losing patience because, as happy as we are with most of his presidency, he has been somewhat weak on the 2nd Amendment.

Is Cruz right about Americans going so far as to elect Elizabeth Warren if the GOP caves on guns?

I certainly hope not.

However, 2nd Amendment voters are different than average Republican voters.

Withholding a vote that would have gone to Trump is almost as bad as switching a vote to Warren.

So Senator Cruz is right.

If Republicans, including our President, do not cool their jets on gun confiscation and new gun laws then we might see our first Indian President.

If that happens, will her Great-Great-Great Grandfather be proud of America’s first INDIAN president?