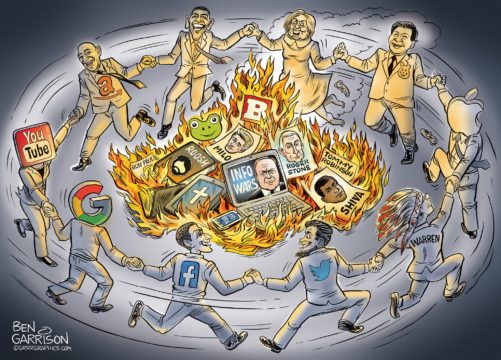 There is a new, unprecedented, and very toxic phenomenon in U.S. politics.

Privately-owned businesses have become blatantly partisan and willing to lose customers and profits by discriminating against and outright banning conservatives. See, for example:

Among those corporations are the information tech giants — social media and WordPress — which have been censoring conservatives, including this blog, Fellowship of the Minds (FOTM), for some time now. See:

The latest social media censorship took place four days ago on May 2, when Facebook and Instagram, with no warning, banned a number of so-called “far-right extremists,” including Alex Jones, InfoWars, Milo Yiannopoulos, Paul Joseph Watson, and Laura Loomer, ostensibly for “safety” reasons to remove individuals who promote “hate and violence.”

But as Clash Daily points out, neither Facebook nor Instagram cited how or what the “far-right extremists” had posted that violated their “community rules” or “terms of service,” which makes their banning and take-down entirely arbitrary.

As usual, President Trump did some huffing and puffing with this tweet:

I am continuing to monitor the censorship of AMERICAN CITIZENS on social media platforms. This is the United States of America — and we have what’s known as FREEDOM OF SPEECH! We are monitoring and watching, closely!!

Instead of empty threats, Texas is doing something about the social media censorship.

The Texas Tribune reports that on April 25, 2019, in an 18-12 vote, the Texas State Senate approved SB 2373, a bill that would hold social media platforms accountable for restricting users’ speech based on personal opinions.

SB 2373 was introduced by state Sen. Bryan Hughes (R-Mineola), who said the bill applies to social media platforms that advertise themselves as unbiased but still censor users. In the Senate State Affairs Committee hearing, Hughes said:

CJ Grisham, the founder of Open Carry Texas, spoke at the hearing in support of the bill. He said Facebook has shut down 16 of the organization’s local groups and did not explain why. Grisham said Open Carry Texas is a conservative gun rights platform and is “routinely targeted” for pushing gun rights on Facebook.

Opponents to the bill maintain SB 2373 violates a federal law that protects social media platforms under a “good Samaritan” policy that allows them to moderate content on the platform however they want.

Harvard Law School lecturer Kendra Albert, who specializes in technology law, said the federal law would likely preempt SB 2373 because “The federal law contains what we would call a ‘subjective standard. It’s based on whether the provider thinks that this causes problems, whereas the Texas bill attempts to move it to an objective standard.” Albert said it would be difficult to determine what is “objectively” offensive, which is why the federal law leaves it up to social media platforms and their users to determine what is offensive. Sometimes there’s not a particular reason why content is removed; it’s flagged by an algorithm.