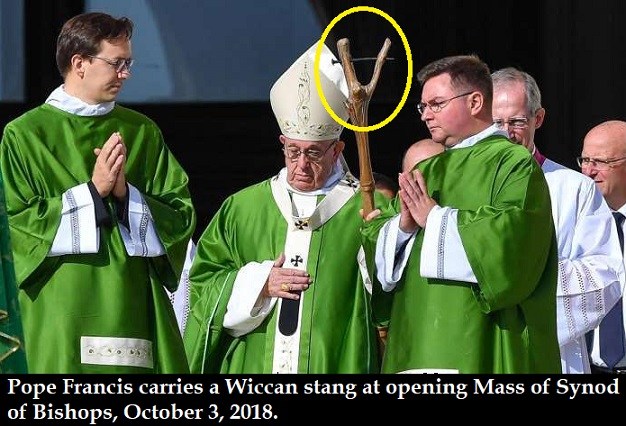 Since his election and installation in March 2013 as Pope Francis of the Roman Catholic Church, we now have sufficient evidence from Jorge Bergoglio’s words and deeds to raise serious questions as to whether this pope is Catholic or even Christian:

Here’s the latest — and the last straw for me — on the apostasy of Pope Francis:

The pagan religion of Wicca or witchcraft uses a range of “magical” tools in its rituals — at an altar or inside a “magic” circle. Each of the tools has different uses and associations, but all supposedly direct magical energies.

The stang is one such “magical” tool — a pronged wooden staff, topped either with a naturally occurring fork or with antlers affixed (Wikipedia). Wiccans claim that witches not only rode on broomsticks, but also on stangs.

On October 3, 2018, Pope Francis opened the Synod of Bishops in Saint Peters Square in Vatican City, holding what appears to be a Wiccan stang, instead of the traditional papal ferula with a cross at the top. (PJMedia)

It’s bad enough that homosexuals have appropriated the rainbow, which God sent after the Great Flood as a sign of His promise that He would never again punish humanity and other living creatures with “a flood to destroy the earth” (Genesis 9).

On World Youth Day on October 17, 2018, Bergoglio signaled his solidarity with homosexuals by adorning himself with an LGBT rainbow cross pendant (LifeSiteNews).