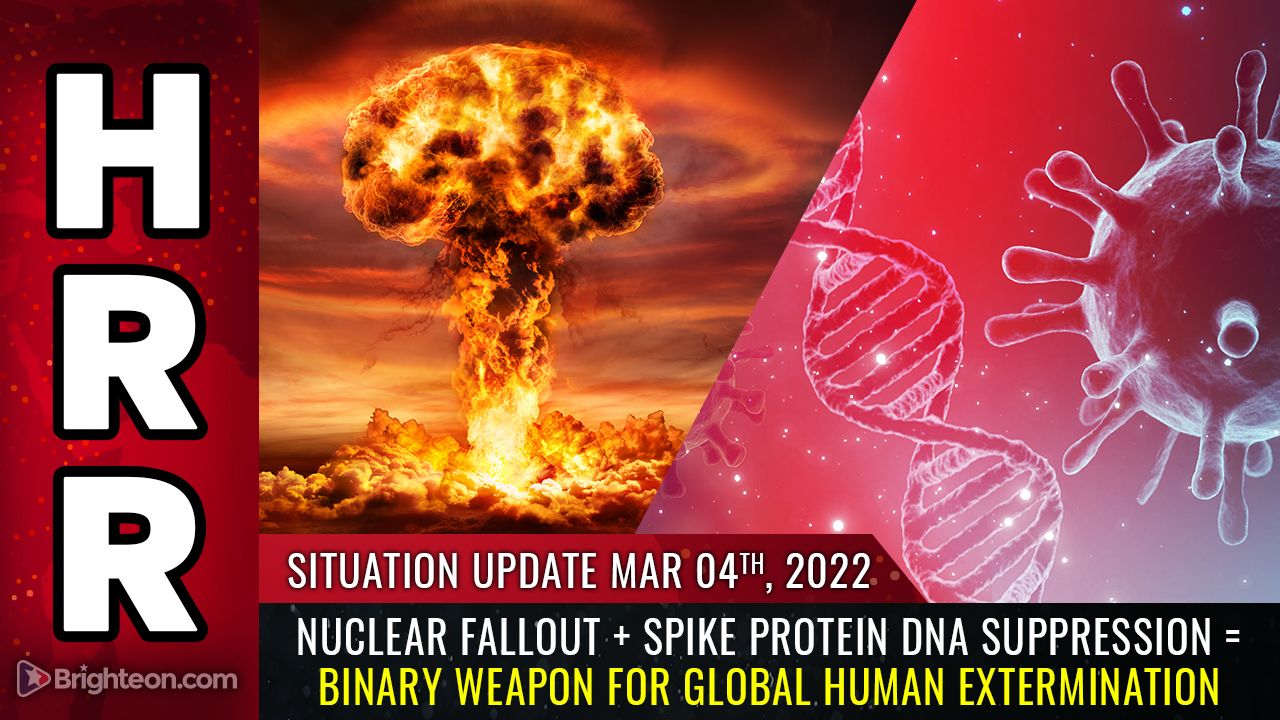 (Natural News) It is now becoming abundantly obvious what the next phase is going to be for achieving global depopulation. The vaccine bioweapon phase has achieved some level of morbid “success” in the eyes of the globalists, likely killing 1 – 2 billion human beings over the next decade as the spike protein damage takes its toll. But even this is nowhere near enough for the demonic entities controlling our planet, as they seek something closer to a 90% total reduction of the human population.

Suddenly their strategy is crystal clear. The spike protein mRNA injections cause about a 90% suppression of the DNA repair mechanism known as NHEJ – Non-Homologous End-Joining. This is a cellular mechanism that exists inside the cells of humans, animals and plants to maintain genetic integrity — a necessary condition for life.

Because of the NHEJ mechanism, we are able to automatically repair Double Strand Breaks (DSBs) in our chromosomes when we are subjected to ionizing radiation. Common sources of ionizing radiation include sunlight exposure, commercial jet flights and mammograms. When our NHEJ engine is working normally, chromosomes damaged by ionizing radiation are repaired and do not become cancer tumors. But when NHEJ is suppressed, the body cannot repair DNA damage and begins to grow micro tumors.

The following chart is taken from the bombshell NHEJ suppression study published in the journal Viruses. You can find it here. It shows the near-90 percent suppression of NHEJ in the presence of the spike protein which we now knows penetrates the nucleus of the cell.

In the conclusion of the paper, the authors write, “We found that the spike protein markedly inhibited both BRCA1 and 53BP1 foci formation (Figure 3D–G). Together, these data show that the SARS–CoV–2 full–length spike protein inhibits DNA damage repair by hindering DNA repair protein recruitment.”

Micro tumors, over time — and especially in the toxic blood environment of the average vitamin D-deficient person — become large tumors. And those tumors lead to death (sometimes death by chemotherapy).

So right now, all across the world, there are about five billion people who have received covid vaccination injections (source) which are actually experimental gene therapy treatments that alter their DNA and suppress their DNA repair mechanisms. All that is necessary for globalists to kill those five billion people is to unleash a new source of low-level ionizing radiation that circulates across the globe… and then let physics do the rest.

Starting to get the picture of how evil these globalists really are?

This nefarious goal can be achieved by the globalists in any of the following ways:

In any of these three scenarios, ionizing radiation is released and spreads across the globe due to winds. Various radioisotopes likely to be released in these events include iodine-131, cesium-137, strontium-90, plutonium-241 and others. These isotopes have various half-lives that will unleash intense iodine-131 exposure for about 10 weeks or so, followed by cesium-137 which will contaminate soils, waterways and the food supply for about 300 years (that’s about 10 half-lives). Strontium-90 has a similar half life and decay time.

No one will be able to escape the radiation exposure in the Northern hemisphere.

When mRNA vaccinated people are exposed to low levels of ionizing radiation, they will immediately start growing a swarm of new micro tumors across their entire body

A normal, healthy person with functioning NHEJ can repair ionizing radiation damage, especially if the exposure is spread out over time. But mRNA vaccinated people have lost around 90% of that repair capability. This is why mRNA-injected people are already experiencing 2000% increases in cancer rates, anecdotally reported, and it’s why we’re seeing shocking increases in all-cause mortality as reported by several life insurance providers.

The addition of a new source of global, low-level ionizing radiation would be devastating to those who have taken the mRNA injections. They would lose genetic integrity across their bodies, with tissues and organs mutating into non-functioning attempts at blood vessels and protein strands. In effect, these people’s own cells would turn against them, and it wouldn’t be long before they would suffer catastrophic failures of one or more organs or organ systems such as the circulatory system. During autopsies, it would appear as if their bodies were ravaged by a sudden wave of cancer (similar to acute radiation poisoning, but acting more slowly).

Importantly, these deaths would be diagnosed as cancer deaths, not vaccine deaths. And if a nuclear bomb could be blamed on Russia in any way, then Putin could be the scapegoat for global cancer deaths and the near-extermination of humanity.

Of course, the mRNA injections were necessary to set up the conditions for this mass die-off. Once in place, all the globalists needed was a new source of ionizing radiation to be released. And that’s fairly simple for the deep state, since Russian-made nuclear materials were smuggled out of Ukraine during the fall of the USSR in 1991, and western intelligence sources got their hands on Russian nuclear material during the chaos.

This means the globalist “deep state” has Russian nukes on hand and can set them off anywhere they want, then blame Russia for the heinous act. The obedient propaganda media of the west will gladly go along with the lie.

Similarly, Putin might actually be pushed into using his own nuclear weapons due to the extreme economic war actions that have been unleashed against Russia. We could then experience a global nuclear exchange involving several nuclear powers.

Either way, it’s clear that America and NATO are attempting to drive the world into a nuclear event of some kind, and as I’ve described in this story, I think we know the reason why. It’s the second part of the binary weapon for global depopulation.

I’ve stated this many times before, but only now are many people seeing how the dots connect. It’s now obvious that the attacks on humanity have been planned to take place in multiple vectors: Economic, biological, radiological, psychological, etc. When they are layered together on unprepared or weak-minded individuals, the result can be so devastating that their lives are quickly ended. This process is already under way and is being rapidly accelerated with the conflict in Europe. Bill Gates must be thrilled.

About 63% of the world has been injected with mRNA. Nearly 100% will be exposed to ionizing radiation as soon as the nuclear detonations (or dirty bombs) can be achieved by the globalists. 100% of the world population will face famine, starvation, fiat currency collapse and insane fuel prices due to the economic war that has recently been unleashed. And of course, nearly 100% of the population is subjected to the psychological terrorism of the lying corporate media and government propaganda.

Not surprisingly, very few individuals can withstand all of this with their minds and bodies intact. Count your blessings, because you are among these very few people.

Understand, though, that if the globalists achieve their desired escalation, many of the people you know will be dead within two years. They will die from “cancer,” from famine, suicide, lawless violence, immunological disorders, etc. Very few people who did not prepare will survive what is coming. For the most part, only the prepared will have a chance of making it through.

Get prepared to survive a nuclear war

Listen to my detailed podcast today to hear:

All these solutions (and many more) are found in today’s hard-hitting Situation Update podcast: