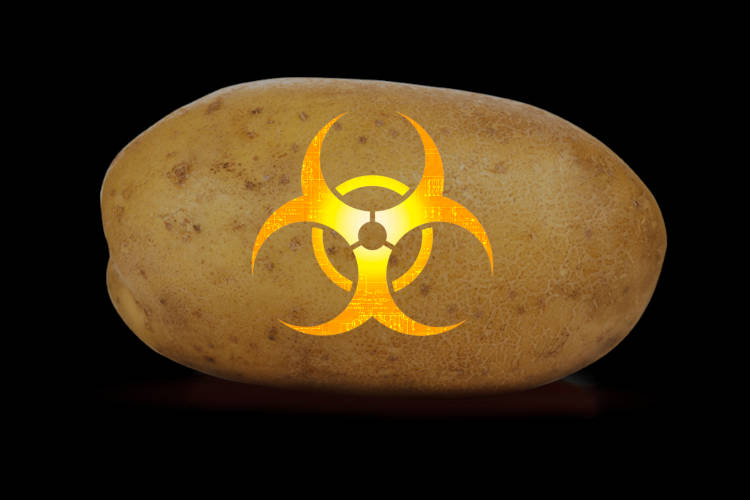 “I somehow managed to ignore the almost daily experience that GM potatoes were not as healthy as normal potatoes.” ~Caius Rommens, author of Pandora’s Potatoes: The Worst GMO’s

Activist and concerned citizens have for years been ringing the alarm bells over genetically modified (GM) foods taking over our food supply.

There are several critical concerns surrounding this issue. We do not yet know what the long-term health effects will be of mass consumption of GM products. We know that they have in some cases been linked to the development of cancer. Production of GM crops requires massive amounts of patented chemical fertilizers, herbicides and seed activators. GM crops contribute to monoculture. GM seeds are patented by seed companies and GM crops are known to migrate between fields, leaving non-GM farmers liable for patent infringements. GM crops represent the corporate takeover of the food supply and will make the entire world dependent on for-profit for survival.

In short, GM crops are an exceptionally bad idea, and now even the main scientist who has developed all GM potatoes is speaking out publicly on the hidden dangers of this new frankenfood.

Having spent 26 years as a genetic engineer in the agricultural industry, he Ex-Director of J.R. Simplot and team leader at Monsanto, Caius Rommens, recently expressed his concerns over GM potatoes in an interview with Sustainable Pulse. He’s developed over 150,000 varieties of GM potatoes, under budgets exceeding $50 million, and can be considered the world’s foremost expert on GM potatoes.

In the interview, Rommens notes that a big factor in his shortsightedness regarding the dangers of GM potatoes is the fact that as a scientist he never left the laboratory in order to really observe how his creations performed in a real agricultural environment. This is a common form of myopia associated with modern science.

Regarding GM potatoes, Rommens expressed his concern over how these products were reviewed and approved by the USDA and the FDA.

“It is amazing that the USDA and FDA approved the GM potatoes by only evaluating our own data. How can the regulatory agencies assume there is no bias? When I was at J.R. Simplot, I truly believed that my GM potatoes were perfect, just like a parent believes his or her children are perfect. I was biased and all genetic engineers are biased. It is not just an emotional bias. We need the GM crops to be approved. There is a tremendous amount of pressure to succeed, to justify our existence by developing modifications that create hundreds of millions of dollars in value. We test our GM crops to confirm their safety, not to question their safety.

The regulatory petitions for deregulation are full with meaningless data but hardly include any attempts to reveal the unintended effects. For instance, the petitions describe the insertion site of the transgene, but they don’t mention the numerous random mutations that occurred during the tissue culture manipulations. And the petitions provide data on compounds that are safe and don’t matter, such as the regular amino acids and sugars, but hardly give any measurements on the levels of potential toxins or allergens.”

The crux of his concern is that because these products are being developed for profit, and at great expense to corporate developers such as Monsanto, any science or even opinions that run counter to the effort to bring these products to market as quickly as possible is ignored, dismissed, or even covered up.

He also comments on the fundamental flaw with this type of science, which is the strictly scientific materialistic viewpoint that life itself can be extracted and separated into individual parts, ignoring the interconnectedness of all things. Essentially, this is the arrogance of modern science.

“I dedicated many years of my life to the creation of GMO potatoes, and I initially believed that my potatoes were perfect but then I began to doubt. It again took me many years to take a step back from my work, reconsider it, and discover the mistakes. Looking back at myself and my colleagues, I believe now that we were all brainwashed; that we all brainwashed ourselves. We believed that the essence of life was a dead molecule, DNA, and that we could improve life by changing this molecule in the lab. We also assumed that theoretical knowledge was all we needed to succeed, and that a single genetic change would always have one intentional effect only.

We were supposed to understand DNA and to make valuable modifications, but the fact of the matter was that we knew as little about DNA as the average American knows about the Sanskrit version of the Bhagavad Gita. We just knew enough to be dangerous, especially when combined with our bias and narrowmindedness. We focused on short-term benefits (in the laboratory) without considering the long-term deficits (in the field). It was the same kind of thinking that produced DDT, PCBs, Agent Orange, recombinant bovine growth hormone, and so on. I believe that it is important for people to understand how little genetic engineers know, how biased they are, and how wrong they can be. My story is just an example.”

Rommens even spoke briefly about the potential effects that GM crops like potatoes can have on pollinator insects, like bees which are in serious decline worldwide.

“The problem with certain insects, including bees, is that they cannot degrade the small double-stranded RNAs that cause gene silencing. These double-stranded RNAs were intended to silence several potato genes in tubers, but they are likely to be expressed in pollen as well. So, when the pollen is consumed by bees, the double stranded RNAs in this pollen may silence bee genes that share inadvertent homology.”

It’s interesting to see a revolt of this nature, where a leading figure in the development of technology steps back and realizes his errors and chooses to inform the public. Rommens has recently penned a book about his experiences entitled Pandora’s Potatoes: The Worst GMO’s.

Read the full transcript of the interview, here.

This article (The Creator of GM Potatoes Comes Clean about the Hidden Dangers of this New Frankenfood) originally created and published by Waking Times and is published here under a Creative Commons license with attribution to Alex Pietrowski and WakingTimes.com.

Disclaimer: This article is not intended to provide medical advice, diagnosis or treatment. Views expressed here do not necessarily reflect those of WakingTimes or its staff.