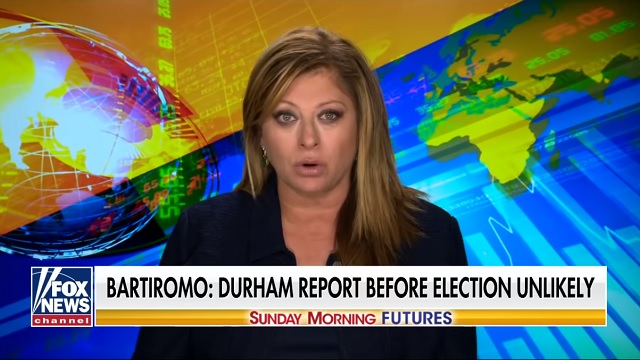 The Department of Justice has successfully stalled for nearly four years without lifting a finger to hold any higher-ups accountable for any of the crimes committed during the Obama administration.

A phony Q-Anon psy-op has been used for around three years now to drag people along with the idea indictments of Hillary, Comey, Brennan, Obama and so on are just around the corner.

Maria Bartiromo on her show Sunday reported it’s not going to happen.

“It is unlikely that we will get a John Durham interim report OR any indictments before the election, now just 37 days away,” Bartiromo said on her show.

“A debate has begun within the Department of Justice as the timing of John Durham’s criminal investigation conclusions,” she said. “I’m being told by sources it is now too close to the election and could be viewed as politically motivated.”

Despite her saying it’s not coming before the election, Fox News and Senator Lindsey Graham is still stringing people along.

I’ve been predicting this for a while now. Here’s what I wrote in Jan 2020 after the DOJ let Hillary Clinton off the hook:

It’s amazing how those Q-Anon believing folks still think mass prosecutions are just around the corner. While it’s technically possible John Durham could find some sort of malfeasance, so far Barr seems to just be running down the clock.

Barr claimed in November that Jeffrey Epstein died due to a “perfect storm of screw-ups” and the evidence showed he hanged
himself.

Barr’s father also gave Epstein, who was a 20-year-old college drop out with no credentials, his first job teaching at the prestigious Dalton School.

Bill Clinton poses with Epstein’s ‘pimp’ Ghislaine Maxwell and a sex slave on board private jet the ‘Lolita Express’ – The Sun US https://t.co/v0Qu6r795b

My money is on the system being rotten to the core and thoroughly compromised by the Epstein network.

Not only is the evidence overwhelming but you’ll find your predictions are a lot more accurate if that’s your operating assumption.

It’s still possible anything could happen but it’s definitely not probable.

I suspect all that’s going to come out of the Ghislaine Maxwell indictment is her accusing Trump of sexual malfeasance with minors as an October surprise.

Republican Senator Ron Johnson appeared on Bartiromo’s show to call for the Durham report to be released:

“Maria, if what you’re reporting is correct, it is incredibly disappointing that John Durham is not going to be reporting,” Johnson said. “What’s political is if he doesn’t report.”

Two sources familiar with Durham’s investigation told Fox News in July that Durham was working expeditiously to try to finish the probe by the end of summer, but that several lines of investigation were not yet complete. At the time, the sources said that Durham “does not want this to be viewed political,” and that the closer it gets to November, Durham could “punt it to after the election.

“The bottom line, that means the American people might go to the polls without knowing the whole extent and all of the detail of all of the corruption, again of the FBI investigation, and the corrupt transition process,” Johnson said.

Johnson called on Attorney General William Barr to “make available to the American public what they’ve already found out” if Durham continues to stall.

“At a minimum, provide those documents to people like me that have these things under subpoena,” Johnson said. “[Director of National Intelligence] John Ratcliffe has to de-classify this information so we can make it to the American public before the election. The political nature is if we don’t provide that information.”