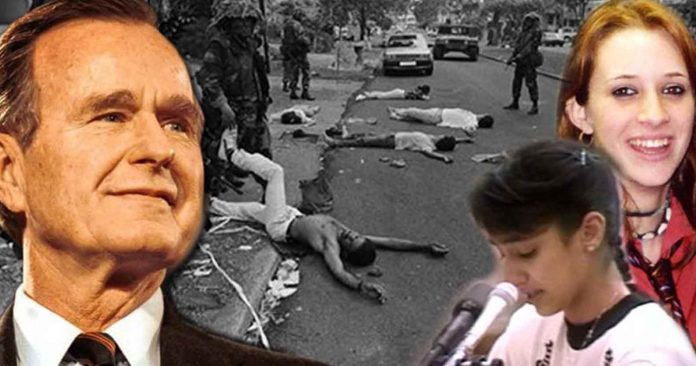 (TMU) On Friday November 30th, former President George H.W. Bush passed away at the age of ninety four, according to a statement released by his friends and family.

While the establishment celebrates the life of the former president and Americans line up to mourn their fallen leader, the facts that are being reported in the mainstream media are far different than the legacy he is leaving behind.

George Herbert Walker Bush was born on June 12, 1924 in Massachusetts to Prescott Sheldon Bush and Dorothy (Walker) Bush. Shortly after his birth, the family moved to Connecticut where he began his formal education at Greenwich Country Day School. At the age of eighteen, Bush joined the U.S. Navy.

During his tenure in the Navy, Bush was stationed with Torpedo Squadron 51 aboard the USS San Jacinto. On August 1, 1944 his unit launched an operation against the Japanese in the Bonin Islands. On September 2, 1944, Bush’s aircraft was downed leading to the death of eight Navy airmen, leaving Bush as the lone survivor. The episode later became known as the Chichijima incident and led to the future president being hailed as a war hero.

Upon graduating from Yale, Bush began his career in politics and was elected chairman of the Harris County, Texas Republican Party in 1963. Three years later, Bush was elected to the US House of Representatives, marking the beginning of a meteoric rise which resulted in him being named director of the Central Intelligence Agency in 1976.

Before he was named head of the CIA, Bush was already heavily involved in covert operations according a book released in 2010, by author Russ Baker. In his book, Family of Secrets: The Bush Dynasty, America’s Invisible Government, and the Hidden History of the Last Fifty Years Baker revealed the relationship between Bush and former President Richard Nixon. A relationship, the author asserts, that eventually led to the Watergate scandal and Nixon’s resignation.

As Director of the CIA, Bush was responsible for overseeing the payment of hundreds of thousands of dollars to Panamanian leader and suspected cocaine trafficker, Manuel Noriega. Although Bush claimed he wasn’t aware of Noriega’s illicit activities until 1988, the CIA’s involvement in Latin America would eventually end in a national controversy during the Reagan administration, in what became known as the Iran-Contra scandal.

While Bush served less than a year as the head of the CIA, he was also caught destroying evidence of US war crimes. As reported by MuckRock,

“Declassified records recently unearthed in CREST show the CIA waffled on a promise to obey the law in destroying records of Agency’s illegal activities and wrongdoing.”

Four years after serving as the director of the CIA, George H.W. Bush was elected Vice President of the United States. Serving under former President Ronald Reagan, Bush kept a low profile and avoided making any key policy decisions or criticisms of the Reagan administration, but attended a large number of ceremonies and public events.

In 1988, Bush was elected president defeating Michael Dukakis of Massachusetts. Within his first year in office Bush’s approval ratings began to slip due to his inability to deal with Manuel Noriega, the Panamanian leader he previously aided while serving as head of the CIA. Bush responded by deciding to invade Panama, and on December 20,1989 he deployed 25,000 troops to the tiny nation. Bush justified the invasion— code named operation just cause— on the grounds of national security. The president mislead the country by claiming Noriega had threatened the US, a claim which turned out to be untrue. After two weeks the conflict ended, resulting in the deaths of twenty American soldiers and as many as 2,000 Panamanians.

Less than a year after the invasion of Panama, Bush once again found himself responding to another foreign policy debacle. On August 2, 1990 Iraqi leader Saddam Hussein began an invasion of nearby Kuwait. In response, President Bush and the American media used the testimony of a 15-year-old Kuwaiti girl, known only by her first name of Nayirah to justify US intervention in Kuwait. However, Nayirah was later discovered to be the daughter of a U.S. ambassador, who was being coaxed by military psychological operations specialists.

In 1991, Bush gave his infamous ‘New World Order’ speech, which many people believe signaled the beginning of the PNAC plan also known as the Project For a New American Century.

After leaving office in 1993, George H.W. Bush retired with his wife Barbara and built a home in a community near Houston, Texas. Though retired, the former president would still face controversy.

Last year, during the height of the #MeToo movement, at least five women women claimed they were abused by the former president. In an interview with Time Magazine, a woman named Roslyn Corrigan claimed Bush sexually assaulted her in 2003 when she was only 16-years-old. At least five more women have accused Bush of sexual assault, including an unnamed Michigan woman who came forward claiming the former president groped her in 1992 at a campaign event. Actress Heather Lind also stated, in a now deleted Instagram post, that Bush groped her during a photo-op in 2014.

Perhaps, instead of blindly praising a documented criminal, Americans should consider asking themselves what other crimes the US government and the media are covering up for the former president.