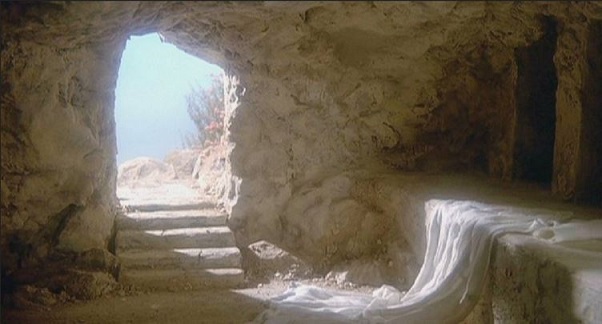 Below is a reconstruction of what happened from the book, The Truth About the Shroud of Turin (Regnery, 2010), pp. 189-191, by my friend Robert K. Wilcox. No matter how many times I read this, it never fails to move me to tears.

The tomb, a rocky chamber carved out of a hillside, a stone rolled against the door, is dark and silent. Lying on a slab is a long, rectangular cocoon, the hills and valleys of which are clearly the contours of a human body. The body of Jesus lies there, face up, a ribbon around the head and chin to keep the mouth closed, packed on all sides with bags of spices.

At some unknown moment in the dead of night, the air in the tomb becomes electric.

At first the vibrations are minute, the sort that could be detected by sensitive twentieth-century instruments; then they dramatically increase until they shake the ground and blow the boulder from the door.

A glow, faint at first, emanating from the shroud suddenly intensifies until rays of light shoot through the threads, star-filled golden rays filling the tomb and pouring out the door.

For thirty seconds — no more — the blinding, pulsating movement continues.

The source of the activity is the corpse, the body, somehow being revitalized, dematerialized, its mass being converted into energy, pure energy, which in the material world is radiant white light.

The body rises from the slab through the cloth, hovers for a moment in midair, then disappears.

The cocoon collapses. Darkness returns. Shouts of “Earthquake! Earthquake!” diminish as the guards run for their lives. And in the air, the distinct odor of scorched linen.

When dawn comes, the women in Jesus’ life draw tentatively toward the tomb, look in the opening, and see the shroud unopened, still wrapped, but definitely deflated. The body is gone. At sunrise the disciples come. John enters the tomb, puts his hand on the cloth, and presses it to the slab. Jesus is there no longer. The disciples and the women quickly gather up the burial garments — the chin band is still in the shroud — and the spice bags and leave before the Romans can return.

At another time, in another place, when they have a chance to gather their wits, they will discover the figure of their master imprinted on the inside of the shroud. The images would be faint, probably not as dark as the passage of time and exposure to air have made them; and the images would be negative ones, a phenomenon that would also become clearer with the passage of time. Regardless, they would view these images as holy — imprints of their precious Lord. The disciples would pay more attention to the images on the shroud if they weren’t already waiting, with the greatest anticipation, for Jesus himself, who, before his death, had promised to visit them after he rose from the dead.

Reconstruction of the face of the man in the Shroud

Scientists at Italy’s National Agency for New Technologies, Energy and Sustainable Economic Development (ENEA) conducted a five-year study of the Shroud of Turin and concluded that the Shroud is not a fake. Their report, in Italian, is here.

The double image (front and back) of a scourged and crucified man, barely visible on the linen cloth of the Shroud of Turin has many physical and chemical characteristics that are so particular that the staining which is identical in all its facets, would be impossible to obtain today in a laboratory, as discussed in numerous articles listed in the references. This inability to repeat (and therefore falsify) the image on the Shroud makes it impossible to formulate a reliable hypothesis on how the impression was made.

In fact, today Science is still not able to explain how the body image was formed on the Shroud … the body image is not painted nor printed, nor obtained by heating….

The blood is human, and there is no image beneath the bloodstains; the gradient color contains three-dimensional information of the body; colored fibers (image) are more fragile than undyed fibers; surface staining of the fibrils of the image derive from an unknown process that caused oxidation, dehydration and conjugation in the structure of the cellulose of the linen….

[T]he origin of the Shroud image is still unknown…. [R]egardless of the age the Shroud, whether it is medieval (1260 – 1390) as shown by the controversial dating by radiocarbon, or older as indicated byother investigations…the most important question…remains the same: how did that body image appear on the Shroud?….

There is no image beneath the blood stains. This means that the traces of blood deposited before the image was. Therefore, the image was formed after the corpse was laid down…. There are no signs of putrefaction near the orifices, which usually occur around 40 hours after death. Consequently, the image is not the result of putrefaction gases….


[The results of ENEA] show that a short and intense burst of VUV directional radiation can color a linen cloth so as to reproduce many of the peculiar characteristics of the body image on the Shroud of Turin, including shades of color, the surface color of the fibrils of the outer linen fabric, and the absence of fluorescence….

[I]t should be noted that the total power of VUV radiations required to instantly color the surface of linen that corresponds to a human of average height, body surface area equal to = 2000 MW/cm2 17000 cm2 = 34 thousand billion watts makes it impractical today to reproduce the entire Shroud image using a single laser excimer, since this power cannot be produced by any VUV light source built to date (the most powerful available on the market come to several billion watts ).

The Church of the Holy Sepulchre in the Christian Quarter of the Old City of Jerusalem occupies two of the holiest sites of Christianity:

In 1809, during a partial opening of the Edicule by the architect Nikolaos Komnenos, a “sweet aroma” emanated from the tomb, the same “scent of sanctity” that often accompanies Marian apparitions and the tombs of some saints.

Most recently, in October 2016, scientists undertaking restoration work in the Edicule also smelled a “sweet aroma” when they removed the marble slab that covers the tomb. There were also electromagnetic disturbances: some of the measuring instruments used by the scientists, when placed vertically on the stone in which Christ’s body rested, either malfunctioned or ceased to work entirely. (See “Tomb of Christ in Church of Holy Sepulchre surrounded by electromagnetic field“)