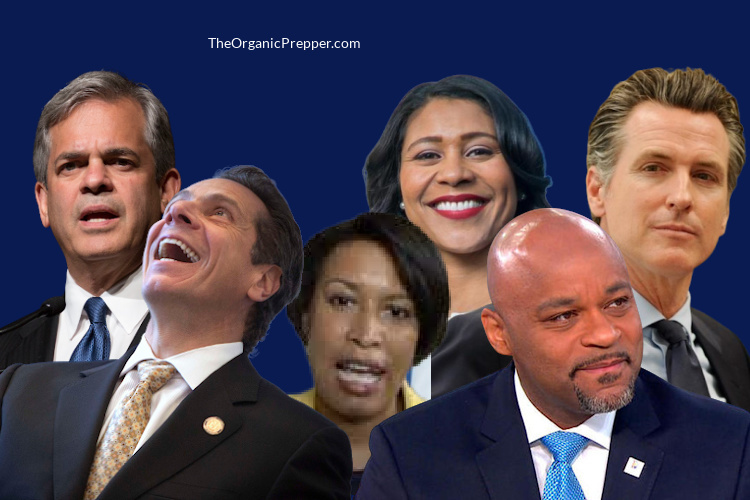 Little is more annoying than seeing a wealthy government official solemnly telling you to stay home, forgo time with your family, and stop working while losing tons of money in missed wages.

Well, except for one thing. It’s more annoying when that government official is telling you to hunker down while they’re out partying in one luxurious location or another. I’d say that is far more annoying to watch those people tell us, “Do as I say, not as I do.”

It reminds me of The Hunger Games, in which people at the Capitol enjoy frivolous pastimes while the peons in the other Districts must spend their days doing menial jobs to provide for the wealthy, lest they be beaten or killed by “Peacekeepers.”

Here are some particularly egregious examples of hypocritical government officials who want you to sacrifice while they celebrate. The list is by no means comprehensive.

Probably the most prominent example of a “leader” abandoning any pretense of following his rules is California Governor Gavin Newsom, who was spotted dining at a fancy restaurant – like $325 per person fancy – at a birthday party for a lobbyist.

California Gov. Gavin Newsom (D) was photographed attending a dinner party at the French Laundry, one of the nation’s priciest restaurants, with a group of prominent lobbyists, including several who represent the California Medical Association. The photos show no one in the large party wearing a mask.

“I want to apologize to you because I need to preach and practice, not just preach and not practice, and I’ve done my best to do that,” Newsom said. (source)

Oh and also, his kids can go to school in person at their fancy private school, while everyone else’s kids are stuck with “distance learning.”

Newsom is self-quarantining after a student at one of his children’s schools tested positive for the coronavirus — another sore spot for critics who are frustrated that most California students are not learning in person.

“His kids can learn in person. But yours can’t. He can celebrate birthday parties. But you can’t,” San Diego Mayor Kevin Faulconer (R), a potential Newsom rival in 2022, wrote on Twitter. (source)

Incidentally, the following night after Newsom got busted at French Laundry, San Francisco Mayor London Breed was caught at a birthday dinner there with 7 other people – right before she closed down dining in every restaurant in San Francisco.

“I cannot emphasize enough how important it is that everyone act responsibly to reduce the spread of the virus,” Breed said in a statement Nov. 10. “Every San Franciscan needs to do their part so that we can start moving in the right direction again.”(source)

Steve Adler, the mayor of Austin, Texas, has been busted twice flouting his own restrictions. First, he hosted 20 people at a wedding and reception for his daughter at a downtown Austin hotel. The very next day, he took 7 other people in a private jet to his timeshare in Cabo San Lucas, Mexico. The thing that makes this so richly ironic is that he addressed the people of Austin from Cabo on a Facebook video in which he said:

We need to stay home if you can. This is not the time to relax. We are going to be looking really closely. … We may have to close things down if we are not careful.” (source)

Adler maintains that neither the wedding nor the vacay broke his orders or those of the state’s governor.

However, the city recommended that people not gather in groups larger than 10 people, and also Adler himself asked people not to travel for Thanksgiving, saying,

“Everyday since March, I repeat that being home is the safest place for people to be,” Adler said in a statement Wednesday. “Only at our most trying moments, like around Thanksgiving, have I asked people not to travel as part of extra precautions. It is safest to stay home. However, we aren’t asking people to never venture out. We ask everyone to be as safe as possible when they do.” (source)

Governor Andrew Cuomo of New York was forced to change his plans after he announced on the radio, for Pete’s sake, that he was having his adult daughters and his 89-year-old mother visit his home in Albany for Thanksgiving. Cuomo:

…went on WAMC radio and told of his own Thanksgiving plans, for all to hear, as CNN noted: “My mom is going to come up and two of my girls, is the current plan. But the plans change. I have a lot of work to do between now and Thanksgiving.”

And then in this same interview, Cuomo scolded New Yorkers again to stay home and to stay in groups of fewer than 10. (source)

Meanwhile, he was telling other New Yorkers to skip Thanksgiving.

“My personal advice is, you don’t have family gatherings – even for Thanksgiving,” the governor said as he listed off a number of smaller gatherings that have led to recent outbreaks across the state.

Mayor Muriel E. Bowser of Washington, DC ignored travel restrictions to go to Joe Biden’s victory party in Delaware, and then changed the rules for a mandatory 14-day quarantine established for peons upon her return. The Washington Post reports:

The trip, which comes as the mayor attempts to discourage interstate travel because of the pandemic, prompted questions from reporters and derision on social media from some residents and Bowser critics.

Bowser (D) said that she was “very proud” to attend the celebration in Wilmington and that the trip “absolutely” qualified as “essential travel” — which is exempted from the mayor’s quarantine order — because she was conducting government business on the road.

…Until last week, Bowser’s mayoral order on interstate travel would have required anyone who visited Delaware (and other states with more than 10 new daily coronavirus cases on average per 100,000 residents) to quarantine at home for two weeks upon returning to the District, except those whose travel was for essential purposes.

Last week, however, Bowser replaced that order with a new one that went into effect Monday, after her trip. The new order got rid of the two-week, post-vacation quarantine that she had instituted in July. In its place, she ordered that people who wish to visit the District from high-risk states get a negative coronavirus test first (though the city will not check or enforce that requirement); residents who travel should quarantine at home — except for essential activities — until they get a negative test, generally at least three days after their trip. (source)

It’s certainly convenient to be able to rewrite the rules at your own convenience.

Mayor Michael Hancock of Denver, Colorado tweeted a reminder for people to “Pass the potatoes, not COVID… Stay home as much as you can, especially if you’re sick… Host virtual gatherings instead of in-person dinners. Avoid travel, if you can.”

He tweeted that minutes before boarding a plane to spend Thanksgiving with his own family members.

Hancock then flew off to Houston, with a connecting flight to Meridian, Mississippi. His wife, Mary Louise Lee, was already there and they would be joining their 22-year-old daughter, Janae Hancock, for Thanksgiving…

…Despite the warning, Hancock headed for the airport on Thursday and passed through the Thanksgiving crowds, tweeting a warning about COVID-19. He told his constituents to stay home and then boarded a plane, undermining critical warnings while placing others at risk, by example and directly in person. He also stood a chance of passing along COVID with the potatoes to his wife and daughter. (source)

It’s notable that in early November, Mayor Hancock humble-bragged that he wouldn’t be hosting his usual Thanksgiving dinner for 60 people at his home. Instead, he opted to fly across the country during a pandemic while telling everyone else to cancel their plans.

Members of the California Legislature

Several members of the California legislature enjoyed a trip to Hawaii to attend a conference.

They rubbed elbows with lobbyists and special interest groups while in Hawaii. The Los Angeles Times reports:

More than half a dozen California lawmakers are among the 50 people attending a policy conference sponsored by the Independent Voter Project, a nonprofit group, at the Fairmont Kea Lani Hotel in Wailea, with some legislators’ travel expenses picked up by the hosts. The four-day conference, at which panel participants discuss various issues including how to reopen states safely amid COVID-19, began Monday.

The annual gathering, which has seen up to 25 California lawmakers in attendance in past years, has faced criticism because it is partly financed and attended by special interests, including businesses and labor groups, that lobby legislators. (source)

Ironically, the conference began on the same day California reinstituted its strict “purple level” restrictions for citizens of the state that aren’t legislators or governors.

And that’s not all.

These are but a sprinkling of the hypocritical actions of those who claim to be leaders but are showing themselves to be more along the lines of pampered despots.

Don’t forget about Speaker of the House Nancy Pelosi’s infamous haircut, Chris Cuomo wandering around without a mask, Senator Diane Feinstein wandering around without a mask at both the Capitol building and Dulles International Airport, the mayor of San Jose dining with members of five other households, Dr. Fauci attending a baseball game with 2 guests and his mask pulled down in an otherwise empty stadium, and the “fact” that it’s okay to “protest” but not to go to church.

It’s certainly no way to get people on board with dystopian restrictions. The fact that these so-called leaders throw caution to the wind when it comes to the rules the rest of us are expected to follow certainly lends credence to those questioning whether the government is overstepping when it’s unnecessary.