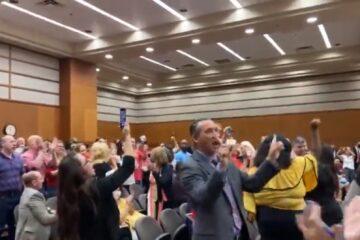 You know, you gotta be a special kind of stupid to be elected by the people and then attempt to act tyrannical towards them and their children by mandating masks so that they can have the privilege of sitting in front of you. These tyrants at the Louisiana State School Board are just such people! After mandating everyone wear a mask, the parents ignored the order and refused to leave. Instead, the parents began to chant “No more masks!” as the tyrants didn’t know what to do except close the meeting… cowards!

Take a look at this and be encouraged that many are not taking the bullying by the thought control police, and thought control is what this entire plandemic is all about.

And from another angle.

A meeting where the state board that governs schools was set to discuss masking requirements on campuses was cut short Wednesday after a crowd of maskless parents refused to leave the council chambers.

The crowd was gathered inside the meeting room of Louisiana’s Board of Elementary and Secondary Education, where board members gathered around 9 a.m. Wednesday to discuss whether they authority to regulate face coverings in schools.

Board members explained to the audience that while they were discussing what power the board had to regulate masks in schools, the current statewide mask mandate applied to state buildings and that attendees must wear face coverings for the meeting to proceed. Those who refused were asked to move to an overflow room.

The board eventually voted 8-2 to adjourn the meeting early, citing the crowd of people who refused to wear masks despite the repeated requests.

So, the cowards were thwarted and refused to listen to their employees. So, they took their ball and went home. Every single one of them should be run out of office and prosecuted for their brazen crimes against the people they serve by following such health diminishing mandates for parents and children.

The cowardly board issued a statement saying they wouldn’t call a special meeting to discuss mask mandates but appealed to the criminal governor’s unlawful executive order.

“The governor’s current executive order is in effect until September 1st. There are no plans to call a special meeting,” said the statement from board President Sandy Holloway, a Republican from Thibodaux; Vice President Kira Orange Jones, a New Orleans Democrat; and Secretary Ashley Ellis, a Republican from Monroe.

Pointing to adjacent rooms set up for people who didn’t want to wear masks (Say what? I thought they claimed it was a mandate.), the thugs claimed the parents were not following law, which there is no law regarding mask mandates.

“As educators and education leaders, we have to be role models for children. Just as we wouldn’t allow this behavior in schools, neither will we tolerate refusal to follow the law, intimidation, bullying tactics and putting the health and safety of attendees at risk during our board meetings,” the statement said.

Yeah, well, neither are the parents tolerating the bullying and tyrannical behavior of their employees and good for them!

TRENDING: Mr. President, Your Predecessor Actually Wire Tapped ALL Of Our Phones… What Are You Going To Do About It?

Among those present was Pastor Tony Spell, who was sentenced to 18 years for merely opening up the Church he pastors in defiance of the tyrannical governor Governor John Bel Edwards’ mandates, not law.