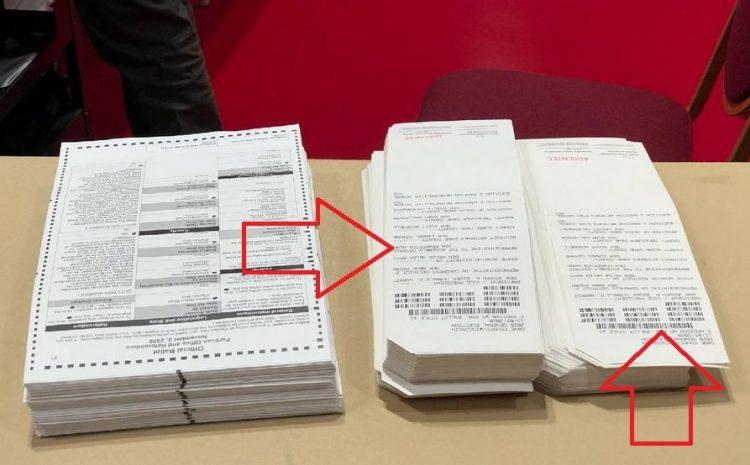 Wisconsin is currently engaged in a recount of 2020 election ballots and what they are finding seems to be more evidence of voter fraud.

According to our source on the ground: More than 2,000 of fake votes were found at Wisconsin Recount in Dane County on Friday

* On Black Friday, there were so many Trump observers that two dozen of them had nowhere to sit, and had to back upstairs and watch on closed circuit TV.

* Thousands of fake votes were found!

The signature “MLW” was used on the the fake votes.
These initials were found on thousands of “votes” by “indefinitely confined” people.

Joe Biden reportedly won Wisconsin after a huge dump of votes were dropped in the middle of the night of Biden only votes to put him ahead of President Donald Trump.

Joe Biden currently leads the state by around 20,000 votes.

In this final photo, the fake votes are the two piles on the right.

Clearly, the numbers are still far apart, but that’s quite a significant difference from the first count. With outstanding ballots remaining to be counted, one can assume we will see those numbers, more than likely, change quite a bit.

Tim Brown is an author and Editor at FreedomOutpost.com, SonsOfLibertyMedia.com, GunsInTheNews.com and TheWashingtonStandard.com. He is husband to his “more precious than rubies” wife, father of 10 “mighty arrows“, jack of all trades, Christian and lover of liberty. He resides in the U.S. occupied Great State of South Carolina. . Follow Tim on Twitter. Also check him out on Gab, Minds, MeWe, Spreely, Mumbl It and Steemit
(Visited 7 times, 1 visits today)
Share
Tweet
Share
Pin