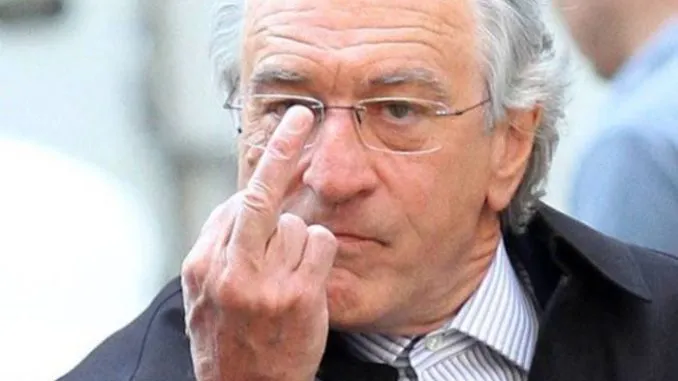 (Natural News) Many on the left are busy making their lists and checking them twice – not Christmas lists, mind you, but hit lists against Trump supporters once the president vacates the White House in January (or so they think).

Hollywood has-been Robert De Niro is one such leftist who made a thinly veiled threat against President Donald Trump’s allies during a recent appearance on The View.

Responding to Ana Navarro, who brazenly asked him why “so many Republicans (are) still kissing the ring (of Trump), among other things,” De Niro barked back that people who support Trump should “be afraid” once the president is “no longer in office.”

“I’m, I don’t know what, what logic to use except they’re just afraid because, but they should be afraid of what’s going to happen later when he’s not around,” De Niro stated to Navarro.

De Niro, pretending to be some kind of expert in elections and the Constitution, further whined that Trump will probably go to any length necessary to “pardon himself” in order to stay out of jail, the assumption again being that Trump is guilty of something that has not already been probed by the Democrats in one of their relentless witch hunts.

“He’ll pardon everyone around him, who he can, who is going to be possibly prosecuted and / or convicted, and then some,” De Niro stated proudly.

In De Niro’s view, Rudy Giuliani, Trump’s lawyer, is not actually trying to win anything on behalf of Trump and his “mob family.” Instead, Giuliani is just there “for the attention,” according to De Niro, and “maybe desperation.”

“He’s the one who was prosecuting under the RICO Act, the way I understand it,” De Niro says. “And now he’s representing a mob family. It’s crazy. I don’t know what happened to him. I feel bad for him.”

Even though there are numerous lawsuits and recounts still taking place all across the country with regard to the contested 2020 election results, De Niro is sure that Trump already lost and will not be serving a second presidential term.

Trump and his supporters think otherwise, though, which De Niro thinks is going to lead to “the end of this country,” especially once the Biden Crime Family is handed the @POTUS handle on Twitter come January.

“I think it affects everybody. It affects all the people, the base that support him, and they’ll learn how it trickles down to them, and, you know, I just don’t, I have no, I can’t comprehend what’s going on with this person.”

As you may recall from last year, De Niro referred to Trump as a “gangster,” revealing that he can’t “wait to see him in jail.” Since such rhetoric was not enough to remove Trump early, De Niro is now threatening punishment for Trump and his supporters the moment the president leaves the White House – which will not be until 2024, by the way.

“We have a real, immediate problem in that we have a gangster president who thinks he can do anything he wants,” De Niro insists.

“The problem is, if he actually gets away with it, then we all have a problem. The gall of the people around him who actually defend him, these Republicans, is appalling, and we must do something about it.”

To keep up with the latest news about the contested election, visit Trump.news. You can also help support the cause of preserving election integrity at DefendingTheRepublic.org.