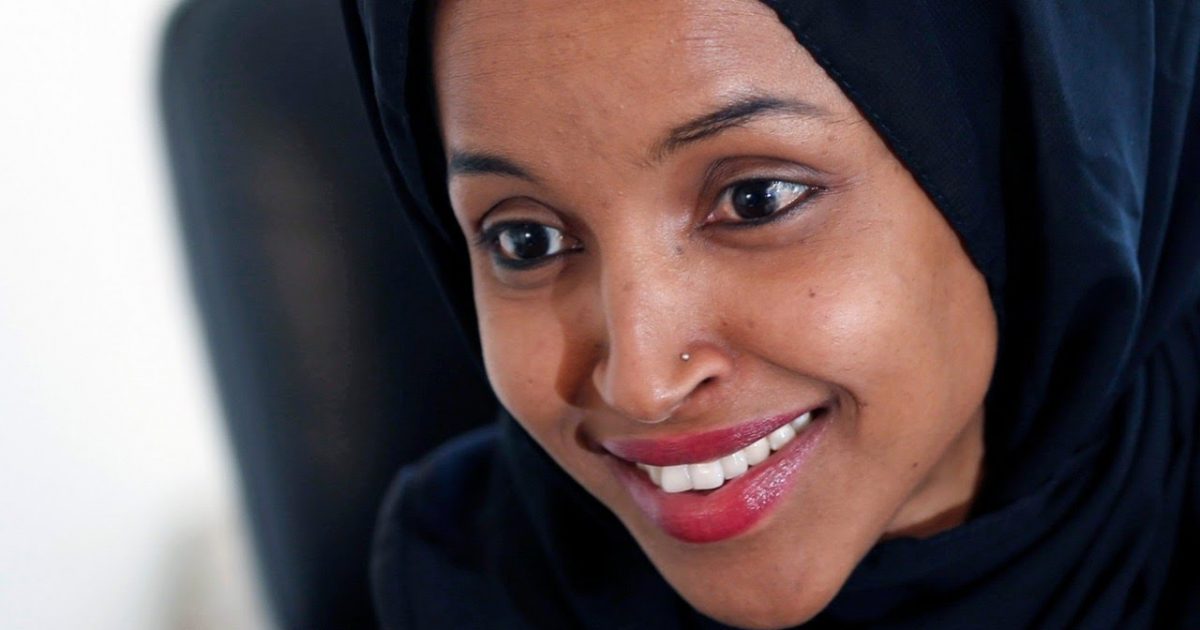 In a series of tweets issued on Thursday, Ilhan Omar, the anti-Semitic, America-hating, terrorist-loving Democrat representative from Minnesota, sided with Iran against the United States after the Islamic Republic shot down a drone over the Straits of Hormuz.

“Just as in Iraq, aggressors are using illegitimate pretexts to beat the drums of war,” she wrote on Twitter, suggesting the attack never happened. “Just as in Iraq, our media is taking these claims at face value.”

“Just as in Iraq, children will die, American lives will be lost, and the world will be less safe. #NoWarWithIran,” she added.

Just as in Iraq, aggressors are using illegitimate pretexts to beat the drums of war.

Just as in Iraq, our media is taking these claims at face value.

Just as in Iraq, children will die, American lives will be lost, and the world will be less safe. #NoWarWithIran

“I have seen firsthand the effects of war. Even in the best of cases, it never has the outcome you expect,” Omar said. “War is death, displacement, and terror. War is hell.”

“So I urge you: be strong. Do not listen to the warmongers and war profiteers whispering in your ear,” she added. “Do not send our men and women into harm’s way.”

Sending teenagers to die, or return with lifelong wounds seen and unseen, does not make you a bigger person. It makes you smaller.

Risking a regional or even global armed conflict does not strengthen our country. It weakens us.

She also urged Americans to side with Iran as well.

And I urge the American people to make your voice heard. Organize. Call your member of Congress.

Let all our leaders know that a war with Iran would be a catastrophe. #NoWarOnIran

We cannot help but wonder: Who is Omar representing in Congress? Minnesota? Or Iran?

As it turns out, President Trump backed down from striking Iran after learning that 150 could be killed in a retaliatory strike. That does not mean, however, that nothing will happen.

President Donald Trump said he called off retaliatory strikes on three Iranian sites following the downing of a U.S. Navy drone because the action would not have been “proportionate.”

“We were cocked & loaded to retaliate last night on 3 different sights when I asked, how many will die. 150 people, sir, was the answer from a General,” Trump tweeted Friday. “10 minutes before the strike I stopped it.”

A commander in the Islamic Revolutionary Guard Corps told a semi-official news agency Friday that the drone had been accompanied by a manned U.S. spy plane that Iranian forces decided not to target.

The planned U.S. attack, ordered after Iranian forces shot down a U.S. Navy drone over the Strait of Hormuz, would have involved airstrikes and was close to being carried out when it was stopped, said an administration official, who would not discuss whether the plan might still be revived. The official was granted anonymity to discuss a national security matter.