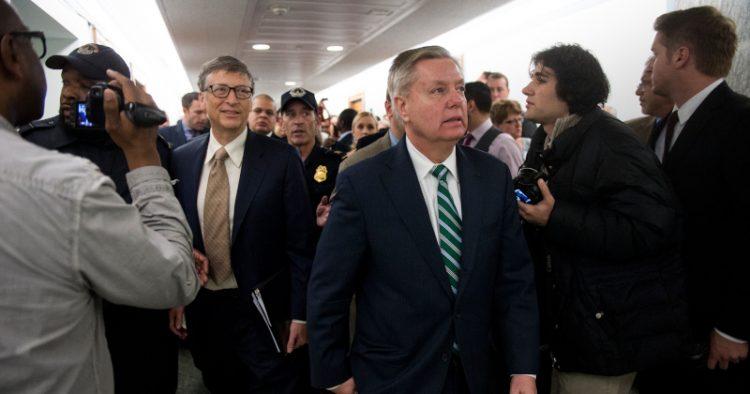 My senator from South Carolina, Lindsey Graham, is another one of those that needs to be ousted from DC, brought home, tried and convicted for his treason against the people of South Carolina and the united States. As we have pointed out and documented time and again, he was complicit in funding, training and helping to arm the Islamic jihadis in Syria that eventually became the Islamic State (ISIS), and now, though he supports President Donald Trump’s decision to block funding for the World Health Organization (WHO), he also said if someone like the psychopath Bill Gates was in charge of it, he would support more funding!

“The current WHO leadership has proven to be incompetent and shown overwhelming evidence of China bias. Cutting off funding to the WHO at this time is the right move,” tweeted Graham.

Well, yeah! It should have never received American money in the first place because it is unconstitutional.

However, he followed it up by not citing the Constitution, but pointing to the man all of these politicians and bureaucrats are pointing to, Bill Gates.

“I have great respect for @BillGates and his work in the public health arena. If someone like Bill Gates were in charge of the WHO I would gladly support increased funding, but I have lost all confidence in the current WHO leadership and capabilities,” Graham tweeted.

I have great respect for @BillGates and his work in the public health arena.

If someone like Bill Gates were in charge of the WHO I would gladly support increased funding, but I have lost all confidence in the current WHO leadership and capabilities.

Bill Gates pretty much runs WHO. He has dumped a whopping $250 million into it recently, and a portion of that, $150 million, was pitched in following Trump’s defending of WHO, according to Reuters.

Remember, Bill Gates’ charity is not so charitable, it’s about making money.

Firstly, if Gates is so committed to giving his money away, why does he keep getting richer? This is not a trivial question: his net worth has increased from $75 billion in March 2016 to a staggering $106 billion today, according to Forbes Magazine, an over 40 percent increase in three years alone.

It is a sickness of our system that billionaires even exist. The UN estimates it would take 30 billion dollars to end world hunger per year. Gates or Bezos could end world hunger for multiple years. We can’t even comprehend that level of wealth. It’s sociopathic. So I’m not saying Gates doesn’t do good things sometimes, but he should not be viewed as a hero. All billionaires should be viewed as sick in the head. They need mental health professionals to work on them before it’s too late for humankind.”

Linsey McGoey, Professor of Sociology at the University of Essex, UK, and author of No Such Thing as a Free Gift: The Gates Foundation and the Price of Philanthropy

, is profoundly skeptical of philanthropy as a whole, claiming it can actually sometimes harm democracy in the long run: “Philanthropy can and is being used deliberately to divert attention away from different forms of economic exploitation that underpin global inequality today” she told MintPress News,

The new ‘philanthrocapitalism’ threatens democracy by increasing the power of the corporate sector at the expense of the public sector organizations, which increasingly face budget squeezes, in part by excessively remunerating for-profit organizations to deliver public services that could be delivered more cheaply without private sector involvement.”

Where do Bill’s billions go?

As Foreign Affairs noted, “few policy initiatives or normative standards set by the World Health Organization are announced before they have been casually, unofficially vetted by Gates Foundation staff.” In this sense, his wealth is extraordinarily anti-democratic, giving him veto power over the decisions and directions of organizations that should be collectively made by the highest representatives of the world’s population, not by one very rich man. And Gates is far from omnipotent, holding many of the patronizing assumptions about developing countries and how best to organize the world that one would expect a rich American tech geek to hold.

McGoey spells out the problem with this corporate attitude to development:

The Gates Foundation has spent twenty years relentlessly championing ‘business solutions’ to inequality and poverty. Through this corporate approach, Mr. Gates personally and the Gates Foundation more generally have enhanced the power and clout of corporations at every level of decision-making, at the regional, national and international level. The Gates Foundation has helped make philanthropy a handmaiden to corporate power rather than helped to empower the non-profit sector to act as a check on corporate profiteering and abuses of power.”

MacLeod goes on to provide examples of his claims.

Then, there is the global agenda being pushed on everyone involving vaccines and guess who is at the center of that?

This is exactly part of the reason for a new forum being convened with experts from all over the world to counter the lying narrative we are given in the mainstream media and un-American politicians like Lindsey Graham.

And let’s not forget the heritage of Bill Gates here.

From my perspective, the only thing Bill Gates needs to head if the end of a rope for his criminal activities against not only the people of the US, but those of the world.

Lindsey Graham’s support for Gates tells you that he should be there right beside him.