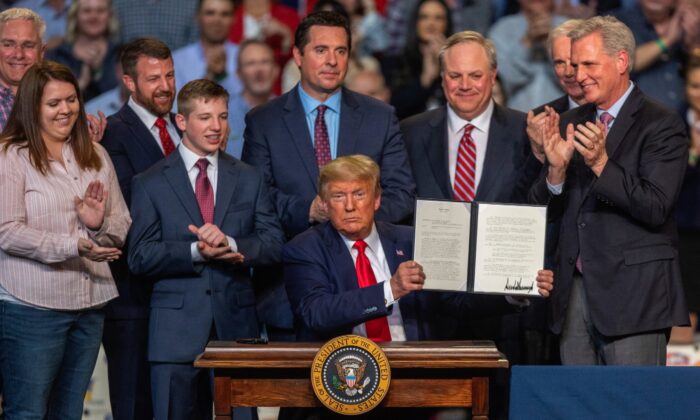 (TNS) There can be no starker example of what President Donald Trump and California’s Republican lawmakers consider a national priority versus what California’s Democratic leaders, including Gov. Gavin Newsom, think is most important that what took place in the state on Wednesday.

The president was there to sign an executive order to provide, with GOP support, more water options for California’s farmers who, by the way, just happen to provide “almost half of all the fruits, nuts and vegetables grown in the country, as well as a whopping share of the livestock and dairy,” according to a 2014 report in the Los Angeles Times.

Calling California’s Democrat-established and Democrat-controlled water policies a “disgrace,” the president signed a memorandum directing the secretaries of the Interior and Commerce departments to implement new policies that make more water available for the state’s multi-billion dollar farming industry (that feeds the country).

“After decades of failure and delays in ensuring critical water access for the people of this state, we are determined to finally get your problem solved. As a candidate for president, I promised to help the water crisis crippling our farmers due the chronic mismanagement and misguided policies,” the president said, according to The Epoch Times.

The Trump administration, Republican lawmakers, and farm and water agencies say the changes will allow for more flexibility in water deliveries.

According to PBS, California’s heavily engineered water system is made up of giant state and federal water projects stretching hundreds of miles of pipes, canals, pumps, and dams, which carry runoff from rain and Sierra Nevada snowmelt from north to south.

Trump has long criticized the environmental rules governing the flow of water in California, which are meant to ensure that enough water stayed in rivers and the San Francisco Bay to sustain more than a dozen endangered fish and other native species.

Supporters, mainly made up of farming groups and Central Valley politicians have hailed Trump’s proposal as a breakthrough that would provide much-needed water to California’s agricultural industry. The plan could also boost water deliveries to Southern California urban areas.

Meanwhile, Gov. Gavin Newsom and the state’s Democratic leaders have vowed to sue the government over the president’s directive because they’re more concerned with protecting endangered fish. Prior to Trump’s signing, he vowed to “file legal action in the coming days … to protect highly imperiled fish species close to extinction.”

There are the priorities: Republicans and especially the state’s farmers are grateful to the president and congressional GOP leaders for providing them water relief; Democrats are more interested in hoarding water for fish that no one can catch and are doing nothing to sustain the state’s economy.

Again, in most other states this dichotomy would not be so pronounced. But again, we’re talking about California, our country’s ‘breadbasket,’ so to speak.

By being more deferential to their Left-wing environmental constituency, Democrats are prioritizing the protection of a species above everything else, including sustaining the agricultural industry that literally provides food for tens of millions of Americans, as well as massive income for the state.

It gets better — or worse, depending on your perspective.

Since Californians decided to defy federal laws against recreational pot use, already-scarce water resources have been diverted to growing marijuana instead of food.

In 2015, the Scientific American reported that the pot industry was literally ‘sucking rivers dry’ as it diverted precious water resources away from traditional agriculture. And while this angered Democratic leaders, they weren’t upset because of the pot industry, per se, they were focused on…the environment:

California lawmakers yesterday called for the regulation of marijuana farms to protect stream flows and help fish species like coho salmon and steelhead, which face possible extinction as the state’s drought rages on.

In an informational hearing of the California State Senate Joint Committee of Fisheries and Aquaculture, Chairman Mike McGuire (D) of Healdsburg argued that a contingent of pot farmers in the state have disregarded the environment in favor of personal profit.

Meanwhile, in Bakersfield — where Trump signed the memorandum — Senate Republican leader Shannon Grove said: “By keeping his word to farmers, President Trump has shown his commitment to securing a safe and reliable food supply for American families.”

“I appreciate President Trump’s commitment to the biological opinions that support water delivery and sound infrastructure. This is an opportunity for the governor and the president to work together to support California’s farmers and families by investing in sound water projects,” Grove added.

“When water flows, food grows. Our farmers must have access to the water they need to ensure food security for American families,” Grove said.