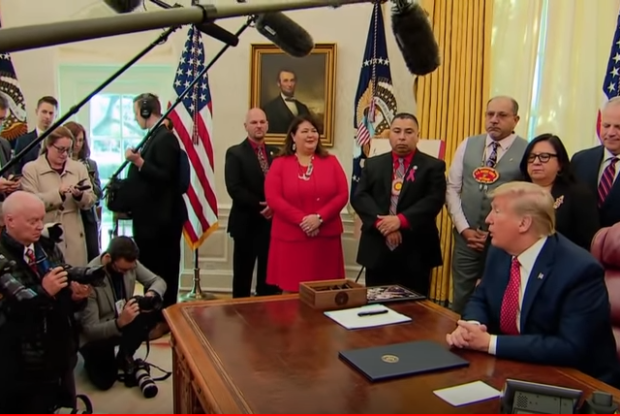 The day before Thanksgiving President Trump signed an executive order to create a task force that will probe the problem of missing Native Americans.

The President says he is chiefly concerned with the cases of missing women and children.

A 2008 study found women in some tribal communities are 10 times more likely to be murdered than the average American.

The National Crime Information Center said there were 5,712 reports of missing American Indians and Alaska Native women and girls in 2016 but only 116 of the cases were logged in the federal missing persons database.

Native American leaders and Attorney General William Barr gathered around Trump in the Oval Office for the signing session.

Shannon Holsey, president of the Stockbridge-Munsee Community Band of Mohican Indians, said in a statement after the executive order was signed that it was an “important first step.”

“While there is so much that needs to be done to stop the violence perpetrated on Native women and girls, I appreciate the Administration for taking an important first step in establishing this Task Force,” Holsey said.

Barr announced the Missing and Murdered Indigenous Persons Initiative during a visit with tribal leaders and law enforcement officials on the Flathead Reservation in Montana. The initiative will invest $1.5 million in hiring specialized coordinators in the offices of 11 U.S. attorneys who will be responsible for coming up with protocols for a more coordinated response to violence against indigenous people.

Contrast the reaction to the tribal leaders with those deriding Trump for signing a proclamation earlier this month honoring the nation’s founders.

President Donald Trump has continued with the tradition established by the late George H.W. Bush in 1990 to declare November national Native American Heritage Month. But a second proclamation he issued simultaneously at the end of October also declares November national American History and Founders Month — and that has sparked controversy.

Soon after the proclamations were posted online on Halloween, some critics began expressing outrage on social media. Some incorrectly claimed the president had replaced the proclamation honoring Native Americans altogether with a new one celebrating the Founding Fathers.

The second proclamation “celebrates the vibrant American spirit that drives our Nation to remarkable heights,” from “overthrowing tyrannical rule” and “liberating Europe from Nazi control” to “protecting precious religious liberties, securing our Nation’s borders” and “placing the first-ever man on the moon 50 years ago.”

The media paints Trump as the most racist president ever.

To the contrary he has proven, time after time, to do things that other presidents refused to do TO FIGHT racial injustice.

Our prayers are with Native Americans and this task force.

Hopefully this is truly a step in the right direction and answers will be found.

Justice is not always as swift as we would like it to be.

But again, the RACIST Trump, has acted upon something that Obama could not be bothered with.