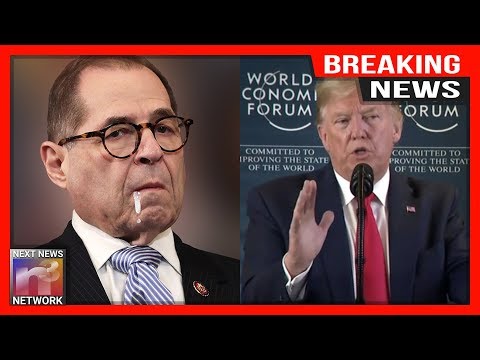 Donald Trump says he has known Jerry Nadler for a long time.

He also minces no words in his description of Mr. Nadler.

One word says it all.

Short but not sweet.

It’s getting personal between President Trump and Rep. Jerry Nadler.

Hours after Nadler delivered a fiery attack on Trump and his impeachment legal team, the president denounced the Manhattan liberal as a “sleazebag.”

“Jerrold Nadler, I have known him a long time,” Trump told reporters as he prepared to leave the World Economic Forum in Davos. “He is a sleazebag.”

Trump was apparently triggered by Nadler’s attacks on him on the Senate floor Tuesday night, when Nadler called out Trump for brazenly stonewalling the impeachment inquiry and lying to the American people.

The president suggested that the bad blood stems from their clashes over unspecified Trump projects in New York. Several of Trump’s signature real estate projects fall within Nadler’s district that stretches from the upper West Side into Brooklyn.

It’s not the first time Trump has used the epithet to deride a perceived critic.

During the 2016 presidential race, he called Associated Press reporter Jonathan Lemire a “sleazebag” and ordered him removed from a press event. Lemire, a respected and prominent journalist who often appears on MSNBC, once worked for the News.

Sleazebag is too kind for Nadler.

As President, Trump likely bites his lip and can’t say what he really wants to say.

Jerrold Nadler is a bag alright.

But where I’m from the proper terminology would be douchebag.

What a lying, conniving sack of excrement.