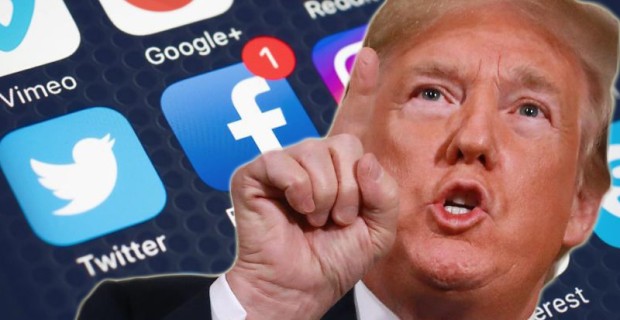 President Trump is set to issue an executive order that will ask federal law enforcement to investigate whether online social media giants have violated antitrust laws by discriminating against conservatives.

The leaked text of the executive order, the full version of which is still being finalized, vows to “protect competition among online platforms and address online platform bias.”

While the mainstream media still claims there is no bias against conservatives, innumerable voices on the right have been suspended, shadow banned or permanently banned for voicing opinions deemed “offensive”.

Meanwhile, people like Sarah Jeong, who posted a series of vile anti-white tweets, and actor Peter Fonda, who expressed his wish to see Barron Trump locked up in a cage with pedophiles, were not punished. In fact, Jeong was verified by Twitter after her racist outburst became a national news story.

Meanwhile, emphasizing the clear bias against conservatives, actor James Woods was locked out of Twitter for sharing a satirical meme because it could “impact an election”.

One wonders if this new rule will be equally enforced against leftists?

The executive order is the culmination of weeks of pressure following the total deplatforming of Alex Jones and Infowars, which intensified yesterday after PayPal announced it would be terminating services with Infowars over ambiguous claims the website had engaged in “hate” and “intolerance”.

Read the executive order in full;

By the authority vested in me as President by the Constitution and the laws of the United States of America, and in order to protect American consumers and workers and encourage competition in the U.S. economy, it is hereby ordered as follows:

Section 1. Policy. Online platforms are central to American commerce and the free flow of news and information. Whether reading news or looking for local businesses, citizens rely on search, social media, and other online platforms to provide objective and reliable information to shape a host of decisions ranging from consumer purchases to votes in elections. Because of their critical role in American society, it is essential that American citizens are protected from anticompetitive acts by dominant online platforms. Vibrant competition in the online ecosystem is essential to ensuring accountability for the platforms that hold so much sway over our economy and democratic process.

[Can expand this section, if necessary, to provide more detail on role of platforms and the importance of competition]

Section 2. Agency Responsibilities. (a) Executive departments and agencies with authorities that could be used to enhance competition among online platforms (agencies) shall, where consistent with other laws, use those authorities to promote competition and ensure that no online platform exercises market power in a way that harms consumers, including through the exercise of bias.

(b) Agencies with authority to investigate anticompetitive conduct shall thoroughly investigate whether any online platform has acted in violation of the antitrust laws, as defined in subsection (a) of the first section of the Clayton Act, 15 U.S.C. § 12, or any other law intended to protect competition.

(c) Should an agency learn of possible or actual anticompetitive conduct by a platform that the agency lacks the authority to investigate and/or prosecute, the matter should be referred to the Antitrust Division of the Department of Justice and the Bureau of Competition of the Federal Trade Commission.

(e) Not later than 60 days from the date of this order, agencies shall report to the President, through the Director of the National Economic Council, recommendations on agency-specific actions in response to paragraphs (d) of this section. Such recommendations shall include a list of priority actions, including rulemakings, as well as timelines for completing those actions.

Section 3. General Provisions. (a) This order shall be implemented consistent with applicable law and subject to the availability of appropriations.

(b) Independent agencies are strongly encouraged to comply with the requirements of this order.

(c) Nothing in this order shall be construed to impair or otherwise affect:

(i) the authority granted by law to a department or agency, or the head thereof; or

(ii) the functions of the Director of the Office of Management and Budget relating to budgetary, administrative, or legislative proposals.

(d) This order is not intended to, and does not, create any right or benefit, substantive or procedural, enforceable at law or in equity by any party against the United States, its departments, agencies, or entities, its officers, employees, or agents, or any other person.