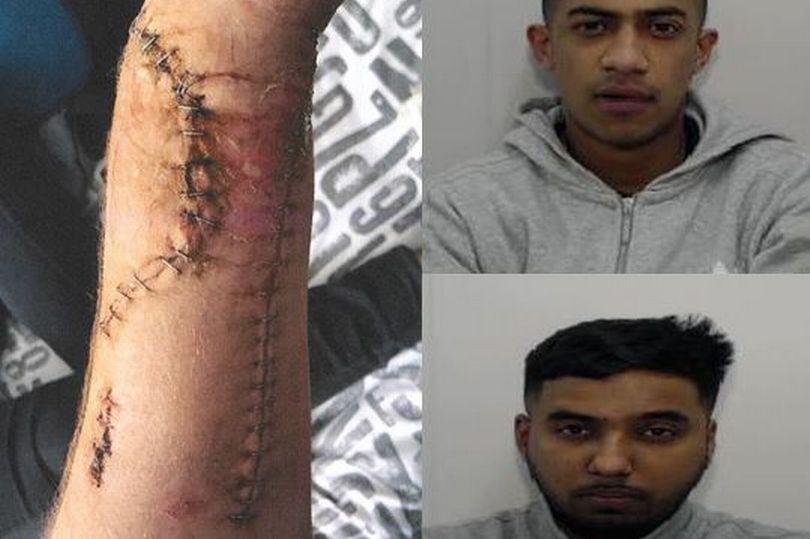 A “heavily-armed mob of up to 20 men” savagely attacked four Brits while spewing anti-white racial hate then tried to escape charges in court by falsely claiming they were the victims of “racist threats.”

From The Birmingham Mail:

A tree surgeon nearly died in a “barbaric” axe attack as a residential street was transformed into a daylight battleground following a road rage dispute, a court has heard.

Habibur Rahman, 27, assembled a heavily-armed mob of up to 20 men within minutes in Rochdale, Greater Manchester, after he felt “disrespected” by a passing workman who intervened when the restaurant worker shouted abuse at an elderly woman motorist for her driving.

Rahman was told to calm down by one of the four tree surgeons working in the area and a scuffle broke out between the pair.

The defendant then told the workmen they were “going to get stabbed up” as he blocked their vehicle in with his car, called one of them a “white bastard” and told him they were in “his country”, Manchester Minshull Street Crown Court heard.

A few short phone calls later and a group arrived carrying various weapons including knives, machetes, a claw hammer, a knuckle duster and an axe.

One of the mob, Mohammed Awais Sajid, 23, removed an axe from beneath the waistband of his trousers and immediately attacked a completely defenceless Cameron Brooksbank, 20.

One of the mob, Mohammed Awais Sajid, known as ‘Skinny’, came armed with an axe.

Others were carrying knives, machetes, a clawhammer and a knuckleduster.

Sajid wielded the axe twice in quick succession, the court heard, first slashing the victim in the chest, shattering ribs and causing a collapsed lung.

Describing the second blow, Tim Storrie, prosecuting, said: “He followed up with a 360 degree spin of his arm, an act which was doubtless employed to enhance the speed and devastation of the attack.

“The blow itself was aimed at the victim’s head.

“He was dimly aware at this stage of the weeping of blood down into his waistband.

“He was turning his body, attempting to leave the scene.

“Through good fortune, he said he realised the axe was above him aiming for his head.

“He put his arm up to defend himself and the blade essentially severed his arm at the wrist.”

The victim, whom the Manchester Evening News is choosing not to name, staggered away and was airlifted to hospital where he underwent life-saving emergency surgery.

His hand was partially reattached although the victim has required a further five surgeries in the two years since the attack.

Back to The Birmingham Mail:

Such was the blood loss sustained by Mr Brooksbank that he nearly died, the court heard, and he also suffered a near fatal infection while in hospital.

During the incident in Church Road, Newbold, on the afternoon of October 17 2017, Rahman struck Mr Brooksbank’s colleague, David Whitham with a knuckle duster to the side of the face.

Mr Whitham, who was involved in the earlier scuffle with Rahman, was hit with such force his nose splattered immediately and he suffered significant injury to his eye socket.

The mob only dispersed when another of the tree surgeons started up a chainsaw.

[…] Prosecutor Tim Storrie told the court that Rahman had told lies about being attacked by Mr Brooksbank and Mr Whitham who he described as having issued racist threats, and those claims were repeated at his trial.

Both tree surgeons “suffered the indignity of being accused of overt racism though the claims were manifestly untrue”, he said.

The judge in the case said the attackers’ claim they were subject to racist threats from their victims was a “pack of lies.”

In interview, Rahman claimed he was subjected to racist threats from the four tree surgeons.

But sentencing, Judge Potter said this was a ‘pack of lies’.

He said: “The fact that a mob could be mobilised so quickly and so heavily-armed is clear evidence in my judgement that you are each associated with gang activity.”

Judge Potter described the violence as Rahman’s gang as ‘asserting control’ over the neighbourhood of Newbold in Rochdale.

Ethnic gangs are allowed to turn entire neighborhoods into virtual “no go zones” with little pushback but the people of the UK are not allowed to control their own borders.

There’s similar “no go zones” like these emerging throughout the West.

Incidentally, I wonder why the international media is ignoring this story?

An African-American girl allegedly getting her dreadlocks trimmed by “three white male classmates” made international news last month despite being an obvious hoax but this very real racist hate attack for some mysterious reason only made the news in the UK!