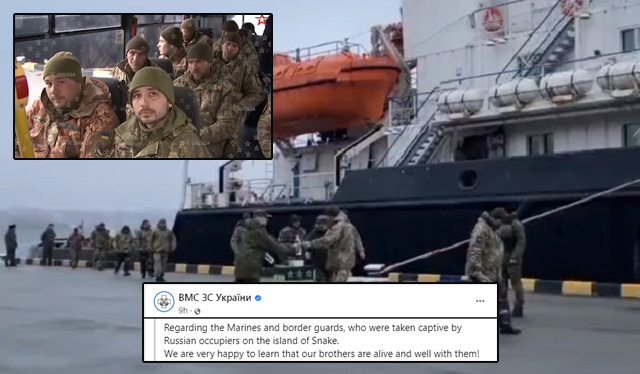 The Ukrainian Navy on Monday admitted the Snake Island story was a load of crap.

Despite earlier reports to the contrary, the Ukrainian military now says that soldiers attacked by a Russian warship on Snake Island last week are “alive and well,” though all the infrastructure on the island has been demolished.

According to a post shared to the Ukrainian Navy’s official Facebook page on Monday, officials said, per a translation: “The Marines and frontier guards captured by the Russian occupiers on Snake Island. … are alive and well!”

Ukrainian President Volodymyr Zelenskyy had said last week all 13 Ukrainians were killed in Thursday’s attack on the island and would be posthumously awarded the title of Hero of Ukraine. As I reported on Saturday, the Snake Island tale was shown to be fraud after Russia released video showing dozens of soldiers who were stationed on the island peacefully surrendering.

What appears to be footage of the Ukrainian garrison of Snake Island surrendering to Russian troops has surfaced; earlier the Ukrainian government had claimed they they refused to surrender and had all died heroically pic.twitter.com/6I6tbQS0Fx

The media spread Zelensky’s lies to tens of millions of people and held up the “13 Ukrainian soldiers” “defiant last stand” as the ultimate act of heroism.

We now know it was nothing more than war propaganda.

the official facebook account of the ukrainian navy posts another acknowledgement that the snake island guys are alive & well in russian custody and all the comments are just like "wow that's a miracle!", DAYS after footage of them appeared & it was admitted, just zero reflection