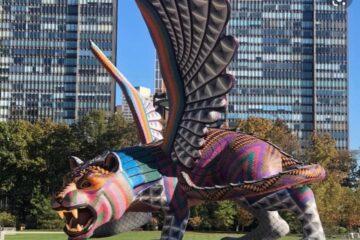 OK, though I am one that believes the Book of Revelation is about that past and the judgment upon Israel in the first century, I confess that there are things that I do find very fascinating taking place today. Among some of those things is the story released by Michael Snyder on a new statue put out by the United Nations that does look like the first beast described in the thirteenth chapter of the book.

One of the strangest statues that I have ever seen in my entire life has just been set up right outside UN Headquarters in New York City. When I first heard about this, I could hardly believe that the global elite would be so brazen, and so I checked into this very carefully. Unfortunately, this is not just a bad rumor. This absolutely gigantic statue is called “The Guardian of International Peace and Security”, and it looks like something out of a science fiction movie. It does not resemble any known creature on this planet. Instead, it appears to very closely resemble a “beast” that is described in the Book of Revelation. If you have not seen it yet, you can see video footage of this “beast” right here. Did they really think that they could put this up without anyone noticing?

If you do a search on Google News for this statue, you won’t find a single story from the mainstream media.

Hopefully that will change soon, because people need to know about this.

Before I go any further, let me share with you what the United Nations is saying about this new statue…

A guardian for international peace and security sits on the Visitor’s Plaza outside #UN Headquarters. The guardian is a fusion of jaguar and eagle and donated by the Government of Oaxaca, Mexico @MexOnu. It is created by artists Jacobo and Maria Angeles.

So it is supposed to be a “fusion” of a jaguar and an eagle.

And just by coincidence, it has been painted in LGBT colors.

Of course when Christians see this monstrosity, they are immediately going to think of the “beast” that is described in Revelation chapter 13…

2 And the beast which I saw was like unto a leopard, and his feet were as the feet of a bear, and his mouth as the mouth of a lion: and the dragon gave him his power, and his seat, and great authority.

Jaguars and leopards have builds that are at least somewhat similar, and so I guess one could make an argument that the body of the statue resembles either one.

As for the feet, they do seem to resemble those of a bear, and it is noteworthy that the feet are a totally different color from the rest of the body.

As for the wings, I suppose that it could be argued that they were modeled after the wings of eagles.

But in ancient lore dragons were also reported to have wings, and it is interesting to note that a “dragon” is specifically mentioned in Revelation chapter 13.

Tomorrow morning, Revelation 13 is scheduled to be part of my regular Bible reading.

Just another “coincidence” I suppose..

TRENDING: Then-Secretary of State Clinton: “We Very Much Want To Have A Strong Russia”

Now, Snyder goes on to include “the Antichrist” in his assessment of the rest of the chapter and ruling the world, but the text says nothing about “the Antichrist.” Rather, it speaks of a beast, and then later a second beast who creates an image to the first beast and causes the people to worship the beast (Rev. 13:4ff).

Furthermore, the apostle John, as well as the prophet Daniel both point out that they are not describing statues, but kings and kingdoms. With that said, we know that Babylon did have statues similar to the one mentioned below, which were lion’s with eagles’ wings.

The same beast mentioned in Revelation 13 is also mentioned in Daniel 7 in line with four beasts, or kingdoms: Babylon, Medo-Persia, Greece and Rome.

2 Daniel spake and said, I saw in my vision by night, and, behold, the four winds of the heaven strove upon the great sea.

3 And four great beasts came up from the sea, diverse one from another.

4 The first was like a lion, and had eagle’s wings: I beheld till the wings thereof were plucked, and it was lifted up from the earth, and made stand upon the feet as a man, and a man’s heart was given to it.

5 And behold another beast, a second, like to a bear, and it raised up itself on one side, and it had three ribs in the mouth of it between the teeth of it: and they said thus unto it, Arise, devour much flesh.

6 After this I beheld, and lo another, like a leopard, which had upon the back of it four wings of a fowl; the beast had also four heads; and dominion was given to it.

7 After this I saw in the night visions, and behold a fourth beast, dreadful and terrible, and strong exceedingly; and it had great iron teeth: it devoured and brake in pieces, and stamped the residue with the feet of it: and it was diverse from all the beasts that were before it; and it had ten horns.

Did those beasts arise? Yes, they did, one after the other in succession over hundreds of years, just like the identification of the idol of Nebuchadnezzar’s dream in Daniel 2.

31 Thou, O king, sawest, and behold a great image. This great image, whose brightness was excellent, stood before thee; and the form thereof was terrible.

32 This image’s head was of fine gold, his breast and his arms of silver, his belly and his thighs of brass,

33 His legs of iron, his feet part of iron and part of clay.

34 Thou sawest till that a stone was cut out without hands, which smote the image upon his feet that were of iron and clay, and brake them to pieces.

35 Then was the iron, the clay, the brass, the silver, and the gold, broken to pieces together, and became like the chaff of the summer threshingfloors; and the wind carried them away, that no place was found for them: and the stone that smote the image became a great mountain, and filled the whole earth.

So, you can see this followed a timeline and the “stone was cut out without hands” has smitten the image and broke it into pieces. That stone is the stone the builders rejected and has become the chief cornerstone (Psalm 118:22; Acts 4:11; Matthew 21:42), the Lord Jesus Christ.

What we are witnessing taking place in the world is God’s judgment upon the nations for their rebellion against Him and His Christ. We are to be a part of that rebellion against tyranny. Frankly, I don’t care about the statue. We can defang the UN in a heartbeat by cutting our treaty with them, kicking them off our soil and defunding them. The question is, will we do that? That’s what needs to happen if you want to kill that beast.