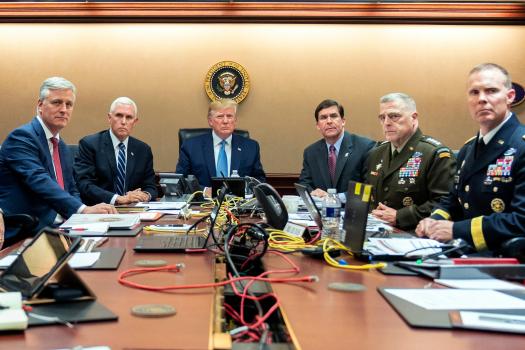 Hate President Donald Trump all you want, but our corporate media is going overboard in normalizing hatred of white males (and by extension, white females). The elite in the USA are doing everything they can to delegitimize the idea white people have any moral authority. [Trump’s white, male team is a bad look for America and bad for national security, too: The problem isn’t just optics, it’s about protecting America. The lack of diversity means Trump and his team aren’t getting the best advice available., USA Today, January 13, 2020]:

When President Donald Trump strode to the podium last week to tell America what would happen next with Iran, he clearly wanted to project his vision of American strength. He stood amid top members of his national security team, including the Joint Chiefs of Staff and other military officers. All men and all white.

While it was a clear display of U.S. military might, as well as Trump signaling that he had the full support of his team (something that can never be taken for granted in this administration), this carefully choreographed moment sent another message: The only people who can handle this national security crisis are white men.

This message was hammered home again later in the day, when the White House released new photos of Trump huddling with his national security team in the Situation Room, discussing the Iran crisis. Again, everyone pictured was white and male, with the exception of Stephanie Grisham, the White House press secretary. It should be noted that Gina Haspel, Trump’s CIA director and the first woman to ever hold that job, reportedly called in to those meetings, and for whatever reason was not part of the group that stood next to the president during his Wednesday speech.

While these tableaus have become standard in the Trump administration, it can still take your breath away to see such a complete lack of diversity presented as the public image of the United States in the year 2020. This is especially true when Trump hosts foreign leaders like the Saudi crown prince or travels to countries where the rights of women and minorities are under assault. Instead of setting an example for the rest of the world, the United States, under Trump, is sanctioning a worldview that excludes women and people of color from positions of power and influence.

More than taking a stand:Diversity is good for business, not just social justice, and colleges should say so

The problem with their absence isn’t just optics. It means the president and his team are not getting the best national security advice available. In November, Defense Secretary Mark Esper tweeted a photo of himself with a group of “think tank experts,” after a discussion with them about China and “the opportunities/challenges in the Indo-Pacific region.” All 12 men pictured were white. Not to knock their expertise, but if you’re going to assemble a group to discuss China and the region, maybe include a few experts from the region? Also, some of the top Asia specialists in Washington are women. Excluding them from the conversation is not just Esper’s loss but the country’s.

With the Trump administration, that’s usually the best it can do. We’ve come to expect this of Trump, given that he and his political allies are associated with white nationalism.

The U.S. military, however, should do better. There is no good reason why its leaders cannot reflect the racial diversityof their troops, especially at a time when the military is struggling to address problems of white supremacy and far-right extremism in its ranks.

Women, meanwhile, have long faced barriers to entry for the military’s top leadership roles, but the recent acknowledgment of the front-line roles women were already playing, plus the new combat positions opening up for them, is expected to improve their professional advancement.

Defining diversity:Democrats’ debate lineup could be all white, but diversity isn’t only about race

There are also outside groups, such as the Leadership Council for Women in National Security, working to improve the situation. The council is asking presidential candidates to commit to diversity when making their senior national security and foreign policy appointments. Seventeen candidates have signed a pledge to do so; the president is not one of them.

In fact, whether Trump wins or loses reelection, his personnel choices (not to mention his policies) will have lasting impacts on diversity long after he’s president. For example, about 70% of Trump’s judicial appointees are white men, meaning they will be shaping the federal court system and making decisions that affect all Americans for decades to come.

The judiciary is hardly unique. According to The Atlantic, the White House has named twice as many men as women to administration positions. This isn’t just giving white men an advantage now, but the valuable experience they will gain in their government posts they can use throughout their careers.

In 2020, it shouldn’t be necessary to remind anyone that women and minorities deserve access to these opportunities, too. Clearly, with this administration, it is.

You can hate President Trump all you want for the perceived failures of his administration, but it’s articles such as this (published in The USA Today) reminding where the real hate in America is entirely directed toward…