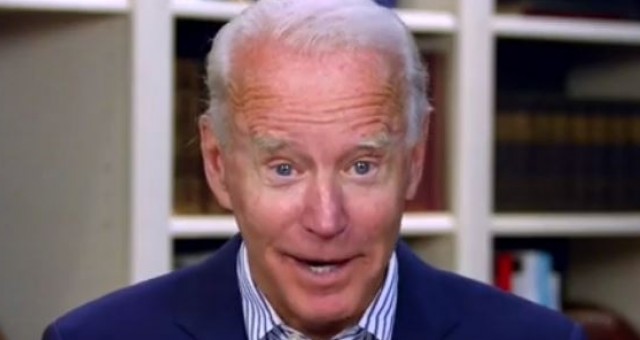 Let’s face it folks, Joe Biden isn’t playing with a full deck if you know what I mean.

He can’t remember where he is. He can’t even say a whole coherent sentence.

His mind just isn’t what it used to be which is good in many ways considering his checkered past.

That is why Democrats want him to stay in the basement just like Obama kept him locked in a closet for the 8 disastrous years that resulted in a divided America to put it mildly.

Over at CNN, analyst Joe Lockhart, who used to be Bill Clinton’s press secretary, is now arguing that Joe Biden should skip the debates with Trump. It’s obvious why he is saying this.

Like all Democrats, he is terrified that the public is going to see Biden melt down in real time.

Democratic strategists and supporters of Vice President Joe Biden are urging him not to debate President Donald Trump in the lead-up to Election Day, citing Trump’s publicity stunts and disregard for the rules in 2016. Meanwhile Biden backers, including some conservatives, applauded the University of Notre Dame and the University of Michigan for cancelling their scheduled debates over COVID-19 concerns.

Former White House Press Secretary Joe Lockhart joined several Democratic Party strategists in bluntly advising Biden, “whatever you do, don’t debate Trump.” Speaking on CNN Saturday, Lockhart said Trump shouldn’t be given another platform which will enable him to “repeat lies,” which he said occurred in the 2016 debates against Hillary Clinton…

“We saw in the debates in 2016 Hillary Clinton showed a mastery of the issues, every point she made was more honest and bested Trump,” Lockhart told CNN. “But Trump came out of the debates doing better I think because he just kept repeating the same old lies: ‘we’re going to build a wall and Mexico is going to pay for it,’ ‘we’re going to keep all those Mexican rapists out of the country,’ and ‘we’re going to make great trade deals’ — none of these things have come to pass.”

WATCH THE VIDEO BELOW!

CNN political analyst @joelockhart tells @smerconish that Joe Biden shouldn’t debate President Trump. Trump “will take the truth and destroy it, and Biden will be in the position of correcting him over and over and over again. I don’t think he should give him that platform.”

Trump “will take the truth and destroy it, and Biden will be in the position of correcting him over and over and over again. I don't think he should give him that platform.” pic.twitter.com/4EOR4Q9Um7

Nice try but everybody really knows what this is all about.

Trump will rip Biden to shreds!