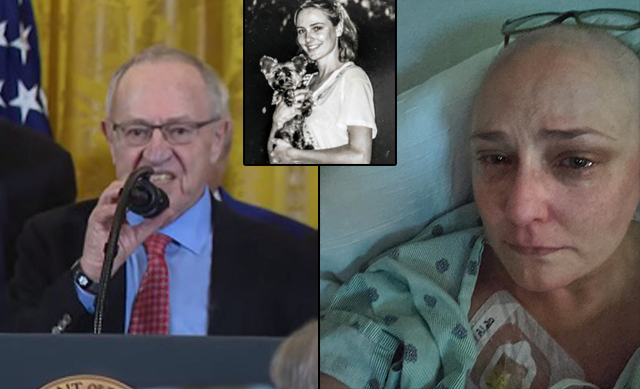 As the New York Times reported last year, Maria Farmer and her younger sister Annie were the first people to report Epstein to the FBI and NYPD all the way back in 1996. Dershowitz on Wednesday evening posted an article he wrote for Newsmax titled, “Key Witness in Epstein Case Made Anti-Semitic Claims,” where he took comments of hers condemning Ghislaine Maxwell’s alleged supremacist views completely out of context and accused her of sharing “anti-Semitic canards” that sound like they came from “The Protocols of the Elders of Zion.”

In one particularly hilarious example, Dershowitz said Farmer was anti-Semitic for saying Epstein and Maxwell were connected to “The Rothschilds” — even though Dershowitz himself told Fox News’ Laura Ingraham on Fox News late last year that he was introduced to Epstein through Lynn Forester de Rothschild!

“Farmer claimed to have evidence that the Israeli Mossad hired Jeffrey Epstein to video tape prominent American political leaders committing acts of pedophilia so that Israel could blackmail them into doing their bidding,” Dershowitz said, “and that the entire conspiracy was under the protection and direction of ‘The Rothschild’s.'”

Dershowitz also constructed this quote of hers where he compiled multiple of her statements into one:

“They are ‘Jewish supremacists'” and they are “all connected” through a mysterious organization called MEGA, which is run by Leslie Wexner who is “the head of the snake.”

As a reminder, the former Prime Minister of Israel and head of Israeli Military Intelligence, Ehud Barak, was pictured hiding his face while entering Jeffrey Epstein’s New York City townhouse (which was given to him for free by pro-Israel billionaire Les Wexner) in 2016.

EXCLUSIVE: Married Israeli politician Ehud Barak is seen hiding his face entering Jeffrey Epstein's NYC townhouse as bevy of young beauties were also spotted going into mansion – despite his claim he NEVER socialized with the pedophile and his girlshttps://t.co/wQBJDkfVzt

Barak also reportedly regularly visited Epstein’s other apartment building in New York (which was majority owned by Epstein’s mysterious brother Mark who bought the apartments off Les Wexner) where underage girls say they were trafficked.

Nonetheless, according to Epstein-defender Alan Dershowitz, it’s “paranoid drivel” (and apparently now anti-Semitic!) to suggest Epstein is connected to the Mossad.

Here’s the opener to Dershowitz’ piece:

The central witness in the Jeffrey Epstein investigation — the person relied on by Netflix in its documentary series “Filthy Rich” — is a 50-year-old woman named Maria Farmer.

It now turns out that she may have been motivated by the anti-Semitic attitudes she has long harbored, to falsely accuse prominent Jews of sexual misconduct. This is some of the bigotry Maria Farmer spewed during a recorded two-hour interview that can be heard online, such as:

“I had a hard time with all Jewish people.”

“They think Jewish DNA is better than the rest of us.”

“These people truly believe they are chosenevery one of them.”

“All the Jewish people I met are pedophiles that run the world economy.”

“They are ‘Jewish supremacists'” and they are “all connected” through a mysterious organization called MEGA, which is run by Leslie Wexner who is “the head of the snake.”

Farmer claimed to have evidence that the Israeli Mossad hired Jeffrey Epstein to video tape prominent American political leaders committing acts of pedophilia so that Israel could blackmail them into doing their bidding, and that the entire conspiracy was under the protection and direction of “The Rothschild’s.”

These anti-Semitic canards sound like they could have come directly from “The Protocols of the Elders of Zion” and other classic anti-Semitic forgeries and screeds, but all of this and more come from the bigoted brain and malicious mouth of Maria Farmer.

Those quotes were completely taken out of context. Having heard the full interview, I remember Farmer was actually saying how she witnessed Maxwell’s supremacist views and it skewed her perception of the world but she specifically said she does not hold any ill will towards all Jewish people despite her terrible experience.

Dershowitz himself has admitted to getting a message at Epstein’s place but claimed it was from an “old, old Russian woman” and “I kept my underwear on.”

Alan Dershowitz admits to going to child sex trafficker Jeffery Epstein's house for a massage, but would like you to know that he kept his underwear on. pic.twitter.com/Sfj4689wDd

Farmer responded to Dershowitz’s smear on Twitter writing, “For anyone abusing a cancer patient, I hope you never know my agony.”

“Please defend me against evil elites by contacting them on here,” Farmer said. “I am losing my will to live. I came forward so everyone would know the TRUTH, not the lies spoken by Dersh. Write to him. I need you all.”

It appears he’s taking his own advice by smearing Farmer in the most vile way possible.