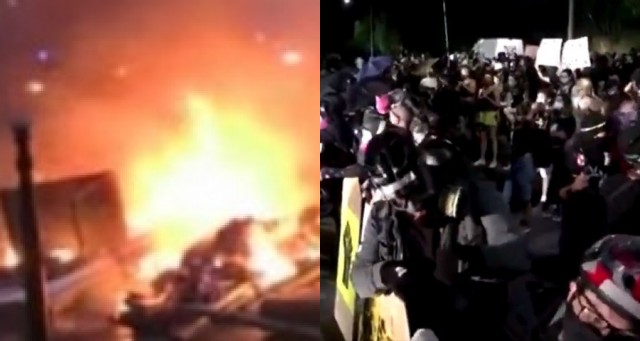 Nightly violent riots continued in Portland, Oregon, on Saturday, with rioters chanting ‘Kill a Cop, Save a Life’ and hurling objects at police that resulted in two officers being hospitalized.

The Portland Police Department said that the rioters chanted, “kill a cop, save a life,” “What do we want? Justice! When do we want it? Now! If we don’t get it, burn it down!”

Police said a clash took place between Antifa and a group of about 30 people who gathered to show support for police. A video posted on journalist Andy Ngo’s Twitter account shows alleged Antifa members harassing others as they leave the site of the riot, Breitbart reports.

As the riots and violence escalate across our nation, America has been braced for extreme violence towards Police Departments. We have all hoped that it would all get shut down before leading to deaths of citizens as well as Police Officers.

It feels that now we are on the brink of violence towards Police Officers turning to lethal attacks and this is unacceptable on every level.

A dog and a person in a wheelchair are at the front of the #antifa line, being used as shields. Antifa shut down SE Burnside again as they confront police at the Penumbra Kelly building on day 80 of the violent protests and riots. #PortlandRiots pic.twitter.com/35gbiyhpou

This is what antifa do to people they encounter in the street. Watch them assault and hit a man walking away from the antifa riot in SE Portland. They bring bats precisely for this purpose. #PortlandRiots #antifa Video by @VenturaReport. pic.twitter.com/AfxmVHHk6K

Breitbart reported that, “Portland Police gave more announcements and force warnings,” the police said. “For the next twenty minutes people in the crowd increased their violent actions toward police officers who were standing behind cars fifty feet or more away from the crowd. Officers reported having rocks, frozen eggs, glass bottles, and frozen water bottles thrown at them. Officers reported people were shining green lasers at them, which is against the law in Oregon. Somebody spray painted over a security camera on the Penumbra Kelly Building.”

Puny & frail #antifa militant with a skateboard tries to go head to head with PPB officer is easily pummled. After 20 warnings. pic.twitter.com/JG4MB7MrDi

“Police said that by the time they put out their press release outlining the night’s attacks that there had been over 60 calls for police help that were on hold because the police were busy responding to the far-left rioters who were attacking them,” the Daily Wire reported.

Our nation can no longer afford to sit on their couches and watch the violent Black Lives Matter and Antifa thugs attacking citizens, businesses and Police Departments. At what point do we hold ourselves accountable for allowing and tolerating these horrific violent acts?