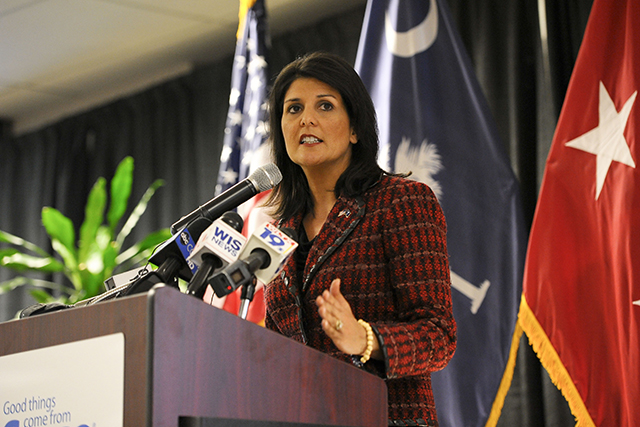 I wonder who these anonymous “US officials” could possibly be?

At this point there’s not even so much as feigning surprise or suspense in the now sadly all-too-familiar Syria script out of Washington.

The Wall Street Journal has just published a bombshell on Sunday evening as Russian and Syrian warplanes continue bombing raids over al-Qaeda held Idlib, citing unnamed US officials who claim “President Bashar al-Assad of Syria has approved the use of chlorine gas in an offensive against the country’s last major rebel stronghold.”

And perhaps more alarming is that the report details that Trump is undecided over whether new retaliatory strikes could entail expanding the attack to hit Assad allies Russia and Iran this time around.

That’s right, unnamed US officials are now claiming to be in possession of intelligence which they say shows Assad has already given the order in an absolutely unprecedented level of “pre-crime” telegraphing of events on the battlefield.

And supposedly these officials have even identified the type of chemical weapon to be used: chlorine gas.

The anonymous officials told the WSJ of “new U.S. intelligence” in what appears an eerily familiar repeat of precisely how the 2003 invasion of Iraq was sold to the American public (namely, “anonymous officials” and vague assurances of unseen intelligence) — albeit posturing over Idlib is now unfolding at an intensely more rapid pace:

Fears of a massacre have been fueled by new U.S. intelligence indicating Mr. Assad has cleared the way for the military to use chlorine gas in any offensive, U.S. officials said. It wasn’t clear from the latest intelligence if Mr. Assad also had given the military permission to use sarin gas, the deadly nerve agent used several times in previous regime attacks on rebel-held areas. It is banned under international law.

It appears Washington is now saying an American attack on Syrian government forces and locations is all but inevitable.

And according to the report, President Trump may actually give the order to attack even if there’s no claim of a chemical attack, per the WSJ:

In a recent discussion about Syria, people familiar with the exchange said, President Trump threatened to conduct a massive attack against Mr. Assad if he carries out a massacre in Idlib, the northwestern province that has become the last refuge for more than three million people and as many as 70,000 opposition fighters that the regime considers to be terrorists.

The Pentagon is crafting military options, but Mr. Trump hasn’t decided what exactly would trigger a military response or whether the U.S. would target Russian or Iranian military forces aiding Mr. Assad in Syria, U.S. officials said.

Crucially, this is the first such indication of the possibility that White House and defense officials are mulling over hitting “Russian or Iranian military forces” in what would be a monumental escalation that would take the world to the brink of World War 3.

"Lots of evidence"
Trump regime not even trying, they're just phoning this disinformation campaign in pic.twitter.com/YD9MtXK97c

The WSJ report cites White House discussions of a third strike — in reference to US attacks on Syria during the last two Aprils after chemical allegations were made against Damascus — while indicating it would “likely would be more expansive than the first two” and could include targeting Russia and Iran.

During the debate this year over how to respond to the second attack, Mr. Trump’s national-security team weighed the idea of hitting Russian or Iranian targets in Syria, people familiar with the discussions said. But the Pentagon pushed for a more measured response, U.S. officials said, and the idea was eventually rejected as too risky.

A third U.S. strike likely would be more expansive than the first two, and Mr. Trump would again have to consider whether or not to hit targets like Russian air defenses in an effort to deliver a more punishing blow to Mr. Assad’s military.

It sure is amazing how psychic Nikki Haley predicted Assad would carry out such an attack last week!

Psychic Nikki Haley: If There Is A Future Chemical Weapons Attack, Assad Did It https://t.co/5uKIi2NKL6

Was she one of these anonymous “US officials”?

Michael Caputo seemed to have implied just yesterday to CNN that Haley was behind the anonymous NYT op-ed.

As Caputo said, the anonymous op-ed writer has been diabolically “gaslighting the President” and “plotting against him.”

She thinks “she should be the president instead of Donald Trump,” Caputo said.

Note too, just four days ago Secretary of State Mike Pompeo’s “US Special Representative for Syria Engagement” Jim Jeffrey, who was appointed just weeks ago on August 17, made the rounds claiming he’s “confident” that President Trump’s “on board” with staying in Syria indefinitely.

Jeffrey also claimed, without providing any evidence, that Syrian President Bashar al-Assad is about to carry out a chemical weapons attack in Idlib.

“There is lots of evidence that chemical weapons are being prepared,” Jim Jeffrey said during his very first interview with a “few” reporters. “I am very sure that we have very, very good grounds to be making these warnings.”

Of course, we will get to see none of this evidence before such an attack takes place and six months later it will come out it was all a fraud!