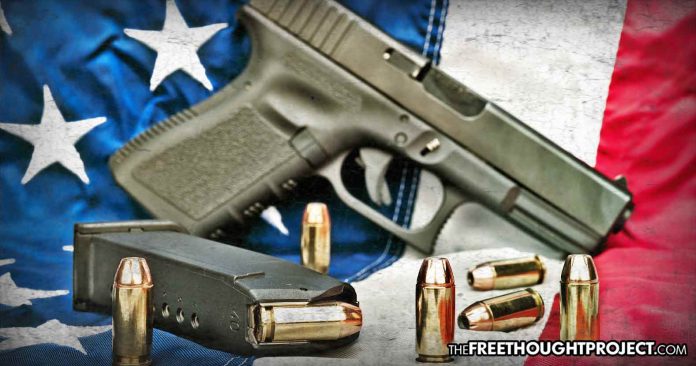 Klickitat County, WA — In reaction to the tragic shootings throughout 2018, Washington state has passed and is planning to pass a slew of new anti-gun bills that will make them one of the most regulated states in the country. But these bills are being met by resistance from an unlikely group. A handful of sheriffs is standing up to the “unconstitutional” nature of the bills and is promising disobedience.

Sheriff Bob Songer is one of these sheriffs who is outspoken about his resistance. During an interview with the Guardian, published over the weekend, Songer told the newspaper that the anti-gun legislation passed last November “is unconstitutional on several grounds. I’ve taken the position that as an elected official, I am not going to enforce that law.”

Songer—like every single sheriff and law enforcement officer in the country—swore an oath to uphold the Constitution, and now he’s overtly honoring it by protecting the Second Amendment.

As the Guardian reports:

Songer also cited ongoing litigation by the National Rife Association gun industry lobby and others which aims to demonstrate the laws violate both the second amendment and the state’s constitution. He also said that if other agencies attempted to seize weapons from county residents under the auspices of the new laws, he would consider preventively “standing in their doorway”.

In November, the state’s voters handily passed an initiative, I-1639, which mostly targeted semi-automatic rifles. As of 1 January, purchasers of these weapons must now be over 21, undergo an enhanced background check, must have completed a safety course, and need to wait 9 days to take possession of their weapon. Also, gun owners who fail to store their weapons safely risk felony “community endangerment” charges.

Feeling the wind at their backs after the ballot, gun campaigners and liberal legislators have now gone even further in the new legislative session. Bills introduced in the last week to Washington’s Democrat-dominated legislature look to further restrict firearms. Some laws would ban high capacity magazines and plastic guns made with 3D printers. Others would mandate training for concealed carry permits, and remove guns and ammo during and after domestic violence incidents.

The sheriff of Ferry County agrees with Songer and is also promising not to enforce the laws. Sheriff Ray Maycumber told the Guardian that he will resist the legislation as well.

Police officers standing up for the gun rights of the citizens they serve is rare, but it has happened before. In Connecticut in 2014, legislators passed into law highly restrictive gun control, gun bans, and bans on high capacity magazines.

The laws were so overreaching and unconstitutional that hundreds of law enforcement officers came together to resist it.

At the time, 250 law enforcement officers in Connecticut signed an open letter stating that they will not enforce the new anti-gun and magazine laws, which they considered to be a violation of the Second Amendment to the U.S. Constitution.

Also, some entire towns—law enforcement officials and politicians alike—have moved to become “sanctuary cities” for gun rights in the wake of the recent anti-gun legislation sweeping the country.

As TFTP reported last year, in Effingham County, IL, the town board voted in April to order its employees not to enforce any laws that would “unconstitutionally restrict the Second Amendment” to the U.S. Constitution.

Effingham County State’s Attorney Bryan Kibler said the measure is meant to act as a warning shot to tell the state legislature that the county does not want unnecessary gun control measures, or for the sale of firearms to be jeopardized. The resolution states:

As TFTP has reported, some sheriffs have even gone so far as to encourage citizens to arm themselves, noting that a well armed society is a safer society.

“In light of recent events that have occurred in the United States and around the world I want to encourage citizens of Ulster County who are licensed to carry a firearm to PLEASE DO SO,” urged Sheriff Paul Van Blarcum of New York’s Ulster County in a Facebook post, after the Paris massacre in 2015.

“I think it’s important to remind everybody with the way things are, you’ve got people coming in with long rifles just slaughtering people,” Van Blarcum told the Daily Freeman newspaper. He is hoping that next time an incident of that kind occurs, “there is an armed citizen around” to respond.

Detroit Police Chief James Craig, agreed, and explaining that police cannot be everywhere all the time, he noted that “if you’re a terrorist, or a car-jacker, you want unarmed citizens.”

Indeed, as we have long contended here at the Free Thought Project, the only thing that stops a bad guy with a gun is a good guy with a gun. Sheriffs who continue to acknowledge this and stand up for the rights of citizens to protect themselves, deserve to be recognized. Please share this story in hopes that other law enforcement officers across the country may take similar stances—as true change comes when good people disobey bad laws.