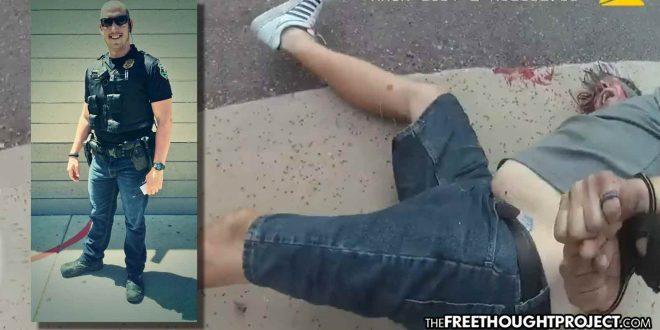 Glendale, AZ — Rather than face a firing squad, presumably, Glendale Police Department police officer Joshua Carroll abruptly resigned. His resignation followed an internal affairs investigation that recommended Carroll be fired for the June 13th beating of a citizen with special needs whose only crime was having fallen asleep in his car.

Carroll approached the car of David Dulaney after someone reported a suspicious man sleeping in his vehicle. Phoenix summers are brutal with respect to heat waves, and sleeping in one’s car is likely a death wish. But officer Carroll was not there to help the man get out of the car and find shelter from the deadly heat. He was just following protocol. Identify the suspect, run his name through the database for warrants, and then either arrest the suspect or let him go. That’s what Carroll attempted to do. But Dulaney was not immediately submissive and compliant due to his mental condition.

Any time a citizen chooses to flex their constitutional rights and civil liberties with officers, they run the risk of angering police to the point an escalation of force is justified. Such escalations of force are not necessary but are permitted under federal use of force guidelines.

After Dulaney would not give his name and identification to Carroll, the Glenale police officer then pulled the man with special needs out of the car, tased him, and then hit him several times on the head with his taser, a blunt object, while the man was face down on the hot pavement. All the while Dulaney can be heard asking Carroll to stop and questioning why the officer was hitting him.

It seems clear from the footage, Carroll likely knew Dulaney was someone who deserved to have been treated differently. Instead, Carroll struck Dulaney so hard with his taser, his scalp had to be stapled back together.

Carroll reportedly bragged to his superiors about the “pain compliance” he was happy to use against Dulaney. As Dulaney screamed, “you’re hurting me,” Carroll told his sergeant:

no offense, but that was exactly what I was trying to do, was to get that pain compliance.

Dulaney was no saint either. Following the violent arrest it was learned that the car in which he was sleeping had been reported stolen. Whether or not Dulaney was the thief in this instance is unclear as he’s yet to be charged with a crime.

But worse than Dulaney’s alleged situation is Carroll’s own troubled work history. The officer had previously been reprimanded for blowing through stop lights on a high speed chase, breaking police department policy for Facebook posts, and putting members of the public’s lives at risk while shooting at a suspect.

Dulaney has yet to be charged for any crimes resulting from his officer-involved beat down. Carroll, on the other hand, apparently saw the writing on the wall and now has joined the ranks of bad cops AKA “Gypsy Cops” who resign before being terminated so they can join another police department and continue their carnage.

Cop apologists will likely conclude the department did not stand behind their officer who clearly had a “criminal” in his cuffs. And police accountability activists will possibly commend Glendale PD for firing a bad guy. But we at TFTP would like to know why criminal charges were not filed against the officer. If you or I had done what he did we would be put away for a long time.