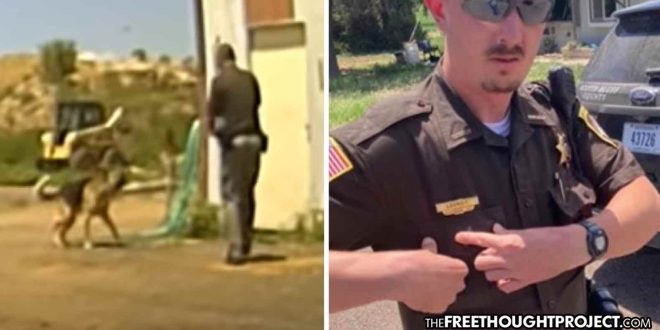 Scotts Bluff, NE — An officer with Scotts Bluff County Sheriff’s Department shot and killed a seemingly friendly dog because it approached him while he was on its owner’s property. The incident was caught on video, and shows the dog approach the police officer while wagging its tail.

As the video shows, the officer begins to back up and reach for his gun, but naturally, the dog is interested in learning more about the new guest on its property and it continues to approach the officer. After just a few seconds, the officer pulled his gun and shot the animal in the face, killing him.

Scotts Bluff County Sheriff Mark Overman later released a video of the shooting, along with a press release defending the actions of the officer, and claiming that the dog was aggressive.

The officer, who the department has not identified, was reportedly snooping around a rural residence near Lake Minatare just before 1:00 in the afternoon to deliver divorce documents from the local court. The officer first tried to knock on the door of the home on the property, but when there was no answer, he began to search around the property and eventually tried knocking on the door of a garage that was adjacent to the house.

When the officer knocked on the door he was greeted by the dog, who was wagging its tail and approaching the officer.

The press release from the police claimed that, “As soon as the Deputy saw the dog he immediately began and continued to retreat as the dog approached, repeatedly saying “No”. The dog continued to advance, bared its teeth while growling, and charged the Deputy. When the dog was within a very short distance of the Deputy in a full charge, the Deputy discharged one round from his handgun into the dog. The dog turned and ran around the side of the shop where the Deputy lost sight of it.”

The police also claim that the dog attempted to “attack” the officer, although the video clearly shows that the dog may have been barking, but was wagging its tail and did not appear to be any serious threat.

The statement went on to say that, “Although we regret this incident, the Deputy had a right and a duty to serve the
summons in person. The use of force was appropriate and lawful according to applicable law and department policy. There is no requirement in our policy or any that we are aware of that states an officer must suffer an actual bite before taking action to defend himself from a large charging dog.”

Troy Little, the dog’s owner, says that he was working nearby on a tractor and didn’t hear the police approaching. He said that he was notified by phone that his dog was killed.

“The sheriff (deputy) told me he was at my rental and ‘Your dog attacked me and I shot him. He is dead.’” Little told the Star-Herald.

“My dog was where he was supposed to be. He was on my property,” Little said.

It is strange that police end up shooting and killing so many dogs while pizza delivery drivers and package carriers seem to have no problem.

UPS workers accidentally made this point quite clear with a Facebook page dedicated to delivery drivers having fun with dogs.

The page features dozens of videos and pictures showing UPS drivers interacting with dogs in a positive way. They even have photos of UPS drivers being greeted by deer, or goats jumping into their vehicles.

The page has nearly 2 million likes, which is a massive following for such a niche page. They also have an Instagram for these photos, which has 658,000 followers. Amazingly enough, with the hundreds of images of drivers and dogs, not a single one of them shows a UPS driver killing man’s best friend.

The family of Little has since started a Go Fund Me page for any legal fees and other costs. If you’d like to donate, you can do so here.