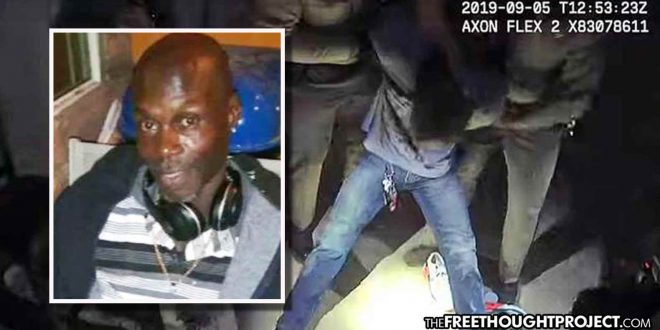 Las Vegas, NV — In the land of the free, police can and will detain and extort you for improper bicycle lighting. If you try to escape this extortion, you can be mowed down by a police cruiser, mauled by a police K9, or, as the following incident illustrates, you may even die.

Byron Lee Williams, 50, was riding his bicycle last week when police noticed he did not have the proper safety light. So, they targeted him for extortion and possible kidnapping. Not wanting to be extorted or kidnapped, Williams rode off on his bicycle. Moments later, this man would be dead—his last words, “I can’t breathe.”

This week, body camera footage was released of the arrest which is leaving Williams’ family with more questions than answers. One major question, in particular, is why did police think it was okay to turn off their body cameras as Williams was face down on the ground claiming he couldn’t breathe.

The footage shows Williams’ body going limp after the officers found the drugs, and he had to be dragged to the patrol car to wait for paramedics. Around 5:54 a.m., when Vasquez and Campbell got Williams to the patrol car, the officers turned off their body cameras. Their cameras weren’t turned back on until medical assistance arrived, at 6:08 a.m., Hank said.

Williams was transported to Valley Hospital Medical Center, where he died at 6:44 a.m.

As the video shows, police have Williams pinned down to the ground as he claims he can’t breathe. That’s when one officer responds, “Yeah, because you’re tired of (expletive) running.”

When asked during a press conference why the officers turned off their body cameras, Asst. Sheriff Charles Hank explained that the department policy allows officers to turn off their cameras once the suspect is in custody.

However, the fact that there are 14 minutes unaccounted for on the video is highly suspect considering Williams would be pronounced dead less than an hour later. Even more suspect is the statement from Williams’ stepson who paints an ominous picture of what happened during this stop.

As the Review-Journal points out, “Jeffery Thompkins, Williams’ stepson, said he and the rest of the family met with Metro a few days ago to review footage from seven officers who were at the scene. He said the footage showed officers dragging Williams’ limp body around a corner and dropping him on the ground while they laughed, high-fived and told him nobody was coming to help him. He said there was a lapse in the video that was made visible by the sun’s changed location in the sky.”

“You could see him on the ground, begging for help, and it was still dark,” Thompkins said. “When the images come back on and he’s on his back, the sun is up and he’s being worked on by paramedics. He’s motionless, lifeless.”

During the press conference, police attempted to paint Williams as a career criminals with an extensive history and said that he had drugs on his person. All of this is irrelevant, however, as he was harming no one when police attempted to extort him for a bicycle light. Also, the charges they brought up, according to the family were decades old and Williams was a changed man.

“Those charges that they spoke of were more than 30 years old,” Thompkins said. “He grew up in a time in Los Angeles where people did things, but that should not define his life.”

Thompkins, who lives in Summerlin, explained that he saw a half dozen people riding their bicycles with no safety lights in his neighborhood and none of them were chased down by cops.

“That’s not a good feeling for them to say this is why they stopped him,” Thompkins said, “because if he was in a different place and he was a different color, it wouldn’t have been an issue.”

Indeed, had the Las Vegas police department not attempted to kidnap and cage the man for improper bicycle equipment, Williams would be alive right now.

“Byron Lee Williams did have people who cared about him,” says Williams’ daughter.

“He was loved, he was a changed man, it needs to be known that he changed his lifestyle,” says Williams’ niece.

Sadly, this sort of stop and violence over improper bicycle riding is not uncommon.

As TFTP previously reported, an officer’s dashcam video showed a disturbing scene unfold as a police officer stops a man on a bicycle. An unarmed, shirtless, shoeless man is mauled for several minutes by a police K-9.

The reason for the stop was the cyclist was riding without a light on his bike.

Also, another incident was captured on video in which an officer attempted to cause grave injury to a child by running him over with his cruiser. The child’s crime? He was riding his bicycle without the proper lighting. Now, the taxpayers are going to be held liable for this cop’s actions.