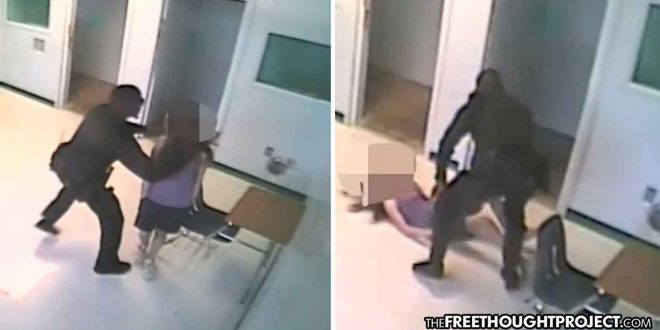 Pompano Beach, FL — The deputies of Broward Sheriff’s Office in Florida have created a terrible image of themselves over the past several years. From cowering behind a wall while children were murdered in a school to sexually assaulting children to torturing people with their K9s, the department has tarnished the image of public servants everywhere. Now, as yet another disturbing video shows, we can add child abuse to the list.

Following the release of security footage which shows a Broward deputy grabbing a teenager by the throat and slamming her to the ground, the officer has now been arrested and charged with felony child abuse.

The way the deputy responds, for whatever occurred, whatever type of verbal dialogue was going on, it makes no sense and it wasn’t necessary.

The incident happened September 25th and the girl is just 15-years-old. Below is the video showing the now alleged child abuse take place at the hands of the very officer who is sworn to protect and to serve the kids in his care at Cross Creek School in Pompano Beach.

The teen can be seen inquisitively walking around the room before stopping behind Miller seemingly staring at him from behind as he’s texting away on what looks like a smartphone. Then, the teen moves a bit, but never touched anyone, which grabbed the officer’s attention. She used her foot to barely tap the officer’s locked right leg which is little more than a schoolyard joke. He faltered, turned to look at her and didn’t seem to pay much attention to her touching him. But surely, it must have angered him.

For over a minute, nothing happened and the girl simply walked around the room. Then, for no apparent reason, he ran up to her, grabbed her by the neck, and slammed her to the floor. What may have started out as a retaliation against the student ended up with the officer getting suspended without pay, and charged with felony child abuse.

We appreciate the quick actions of the Sheriff’s Office regarding this matter and continue to work with them regarding the situation…We are also investigating the circumstances surrounding this incident to ensure all proper District policies and procedures were followed.

Sheriff Tony elaborated on the incident saying his department was frankly embarrassed by the officer’s actions:

When we have one individual that acts outside the confines of the oath that they take, it goes on every news channel…It spreads across the country and it impacts not only the agency, but everybody that carries a badge on their chest in this county, in this state and across the country.

Cross Creek School specializes in teaching students with special needs and it is unclear, although assumed, the student may have some learning challenges. At any rate, the lesson the teenager learned that day, one could say, is not all police can be trusted, and will unleash violence on you using their badge as permission to violate your rights to life, liberty and the pursuit of happiness.

Miller was given $5000 bond and is presumed to be out of jail although that is still not yet known. It’s not the first time TFTP has reported on the dangers of having school resource officers assigned to schools. This is the inevitable result of relying on the police state to “protect” the education system in America.