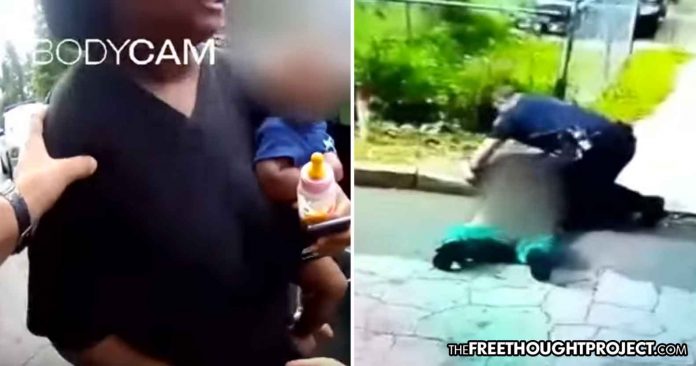 Newton County, GA — Body camera and cellphone video captured a dramatic scene unfold last week as an officer’s attempt to take a mother into custody ended with a baby falling to the ground and the mother with her pants pulled down getting slammed into the concrete.

Breonna Bell was riding with a friend last Thursday when her friend’s car broke down in the middle of the road. Thinking she would get help from police, Bell’s friend dialed 911. However, when the officer showed up, instead of helping the stranded pair of friends, he moved to arrest Bell.

According to police, Bell had a warrant out for her arrest over an alleged probation violation—for a misdemeanor. And, instead of helping the stranded women, the officer ran the passenger’s information to find this out.

When the officer moved in to arrest Bell, who was holding her infant son, all hell broke loose.

Bell, who clearly did not want to go back to jail, tried to walk away from the officer and asked him not to arrest her since she had her son with her.

The officer seemed not to care that Bell was holding a baby and began to yank and pull on her arms in an attempt to arrest her.

“Let her take the child, OK? What are you doing to my baby?” Bell is heard saying to the officer.

As Bell attempts to get in the car to give the baby to her friend, the officer tries to drag her from the vehicle. The result of the officer pulling on Bell was the baby falling from the mother’s arms and onto the ground.

Luckily, the baby appeared to be okay and Bell gave him to her friend. At this point, Bell is dragged from the car and thrown to the ground as the officer attempts to arrest her. During this time, Bell’s pants fell to her ankles and this mother found herself with a cop on top of her as she was half naked. Eventually, back up would arrive and Bell was handcuffed and placed in the cruiser.

According to police, she is now facing new charges of obstruction and cruelty to children.

No one here is claiming that Bell choosing to resist the officer was a good idea. But witnesses and those who watched the video on social media are asking why the officer didn’t handle it differently.

“Well over 20 times, he asks for her to comply and stop resisting and stop fighting and allow him to handcuff her,” Capt. Ken Malcolm with the Covington Police Department said.

But activists and residents disagree and say the officer’s actions were over the top. According to WSB-TV, residents staged a protest Tuesday morning outside of the police station to let the department know how they feel.

ABOUT TWO DOZEN PEOPLE GATHERED ON THE LAWN IN PROTEST OF THE ARREST ON TUESDAY MORNING. IT INCLUDED HER FAMILY MEMBERS AND HER FRIEND WHO WAS THERE AND WITNESSED WHAT HAPPENED.

THE HEAD OF THE NEW ORDER HUMAN RIGHTS ORGANIZATION HELD THE EVENT TO DRAW AWARENESS TO WHAT HE CALLS EXCESSIVE FORCE AND SAYS IT COULD HAVE BEEN HANDLED MUCH DIFFERENTLY.

“This girl was unarmed, there was no danger, but the way they treated her, that’s what I’m concerned about and the warrants are misdemeanors,” said New Order Human Rights’ Gerald Rose.

Cops arresting people while holding babies is unfortunately not all that uncommon. As TFTP previously reported, a Westland City police officer was suspended last year after he was caught on cell phone video surrounding a man with several other officers — as the man was holding his two-month old baby — and taser him.

The video, uploaded to Facebook, shows Westland City police officers assault and arrest a man as he held his baby son.

The victim, Ray Brown, 33, was shot with a stun gun multiple times and arrested on charges of resisting arrest and child neglect for holding the baby while cops tasered him.