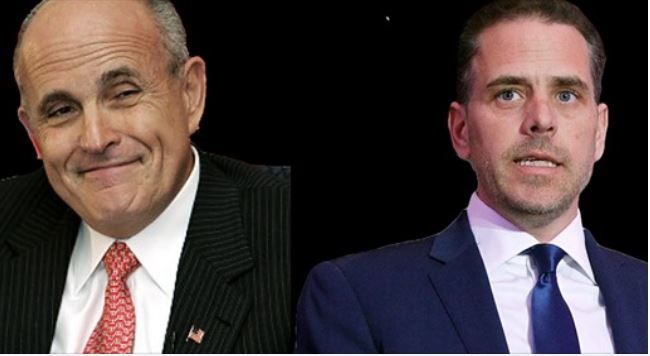 OPINION – Why do I suspect that the President’s lawyer, Rudy Giuliani, has the goods on the DS?

Well, the answer is pretty simple really, the DS has been doing everything in their power to destroy the man.

From a Washington Post article trying to claim some nonsense about Rudy helping a middle eastern Princess regain custody of her child, to his efforts to exonerate his client while in the Ukraine, you name it, the DS has tried to use it as a weapon against Mr. Giuliani.

There is only one logical explanation for this, Rudy know where the metaphorical (hopefully) bodies of the DS’ victims are buried. Many of them seem to be in Ukraine. This is why I am yet to understand why the Democrats seem to have chosen this hill to die on.

‘Trump’s personal lawyer Rudy Giuliani taunted the Deep State-Democrat-media complex Sunday morning and said he will be sharing evidence he “has garnered through hundreds of hours of research.”

And boy did he deliver.

Rudy revealed a huge money laundering operation involving the Bidens and Burisma Holdings. Money was flowing through Latvia and Cyprus disguised as loans to various tech companies then paid out as ‘board fees’ to Hunter Biden.

“That is a straight out violation of a money laundering statute,” Giuliani said.

Giuliani revealed that there is documents showing Schiff’s star witness, fired US Ambassador to Ukraine Marie Yovanovitch perjured herself at least twice during her impeachment testimony.

Witness Yuri Lutsenko, the inheritor of prosecutor general Viktor Shokin’s office told Giuliani that Yovanovitch was sent information showing that $7 BILLION went to the US in a possible money laundering scheme to a firm called “Franklin Templeton Investments,” she refused to him help by connecting him to American law enforcement.

Lutsenko wanted help from the US Justice Department to track down where the $7 BILLION in supposed laundered money went.

Lutsenko went on to state: “I was once again shocked when madame Yovanovitch told two members of the committee that Lutsenko asked me to organize his meeting with American attorney general, but you know gentlemen that there is a procedure for this she told, the procedure that Lutsenko should even — must give us and short topic what points he want he wants to discuss with American law enforcement bodies and Yovanovitch said he never gave us such an information.”

If this testimony is infact true, that means that the former Ambassador to the Ukraine, lied under oath, before Congress.

“I have bad news for madame Yovanovitch,” Lutsenko said. “This is my letter to request for cooperation in investigation against the criminal organization of Yanukovytch regarding possible investment in the US-based mutual and other funds for the purpose of money laundering,” Lutsenko said holding up the letter he wrote dated October of 2017.

Rudy only doubled down:

How about that … it looks like this whole thing is about to blow up in their faces … BIGLY.

Watch for Cyprus to become a huge hub and part of this story … so far we have only scratched the tip of the iceberg!