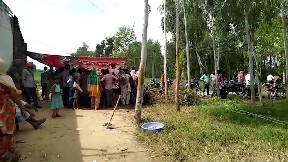 What a bunch of boneheads.

Here’s just one more reason that we should not take every Tom, Dick and Joga that wants to cross our borders.

Here is the video:

Here’s the backstory from LiveLeak:

In a terrible incident, a man who was struck by a high tension electric wire died after being buried alive attempting to heal his injuries in northern India.

The incident took place on September 10 in Uttar Pradesh state’s Pilibhit city, with footage showing the injured man buried up to his neck as people surround him.

Joga Singh, 58, got electrocuted when a high-tension wire fell on him as he was working on his lawn, severely burnt him.

However, the superstitious townsfolk convinced Singh’s family to bury him instead of rushing him to a hospital.

A witness and Singh’s neighbour said that he was electrocuted because of negligence from the electrical department, as the line became faulty and had not been fixed in years.

Talk about the absurd.

A man is electrocuted and they bury him up to his neck to try to save him?

I’m sure the force of the soil around him didn’t help his breathing, even if his head was above ground.

Build that damn wall quickly because I sure don’t want any of these folks coming to my aid some day.

In all fairness, bizarre culture is not reserved for non-Christians.

Also in all fairness, Jesus didn’t preach and teach the things happening at The Bohemian Grove.

Nor did He specifically endorse the things that “Christians” like Hillary Clinton are involved with.

What in the world is wrong with people?