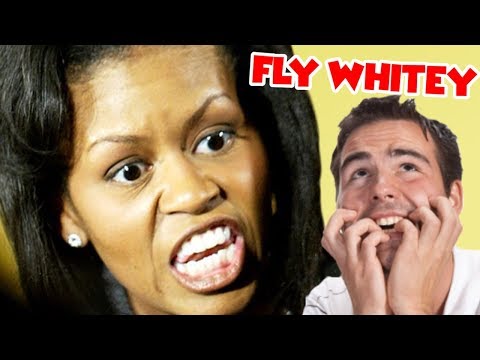 In her usual racist form she called out white people.

Here is a snippet of her speech, which will be followed by some commentary by Salty Cracker.

I wrote on this yesterday, and here are some excepts…

Will Michelle Obama ever let go of the hate?

Slavery ended 150+ years ago Mooch but so many, like yourself, just won’t let it go.

Today we live in a world of demanded “reparations” and real-life “reverse discrimination.”

You have to listen to Michelle’s comments at this year’s Obama Foundation Summit.

“And you’re still running – because we’re no different than the immigrant families that are moving in,” she added.

Obama then went on to make a bizarre supremacist-style comment suggesting that black people were “better” than white people.

“We are just as and often times better than many of the people who doubt us,” she said.

The former First Lady’s comments are somewhat hypocritical given that the Obamas don’t appear to enjoy living around black people themselves.

In 2017, they purchased their DC home for $8.1 million. It is located in Kalorama, an exclusive and wealthy enclave where 83% of the population is white and just 3.8% are African-American.

Read it all at Summit News..,

The Obamas have no problem turning their backs on blacks, and climate change.

Like the typical liberal leadership, Mooch is in the “do what I say and think what I tell you to think, do not copy what I think or do” class.

Here’s more on that waterfront mansion, which is in addition to their multi-million dollar DC home:

In a move that should surprise EVERYONE that has been listening to the constant warnings by leftists, of the dire consequences related to Global Climate Warming Change, Barack and Michael Obama, INVESTED up to $14.8 million in a 6,892 sq ft MANSION… ON AN ISLAND… IN THE ATLANTIC OCEAN!

Situated at an average of only 16ft above sea level, and 200 ft from water, a mere half mile from the OCEAN, Barack said, “To hell with Climate Change!”

Last year, the Intergovernmental Panel on Climate Change (IPCC) stated emphatically, that to keep the rise in global temperatures below 1.5C this century, emissions of carbon dioxide would have to be cut by 45% by 2030.

It’s funny how everything important ends on a decadal year, 2010, 2020, 2030. I wonder how natural disasters plan ahead of time to unleash their fury only on years that end in a ZERO.

“The climate math is brutally clear: While the world can’t be healed within the next few years, it may be fatally wounded by negligence until 2020,” said Hans Joachim Schellnhuber, founder and now director emeritus of the Potsdam Climate Institute.

Do what I say, not what I do plebes!

Mooch has a silver tongue and a silver spoon in her mouth and doesn’t fool most of us.