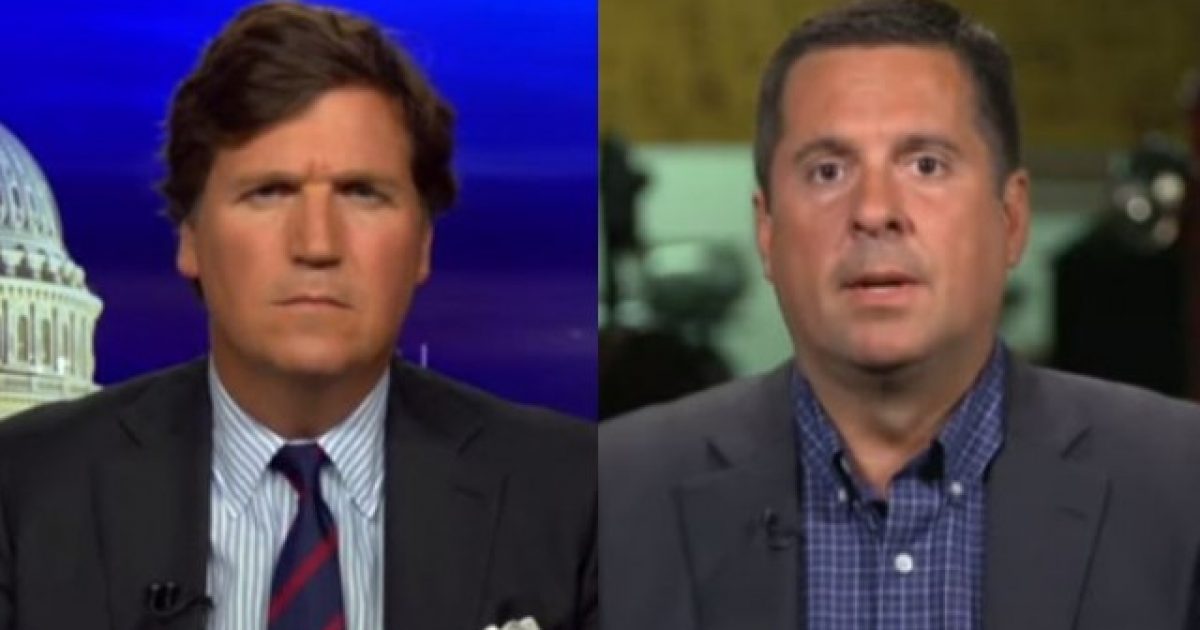 Nunes: ‘I Believe James Comey Will Be Held Accountable’ For Crimes Related To ‘Spygate’ (Video)

As outrage among Trump supporters and conservatives spread this week following news that Justice Department officials would decline to prosecute James Comey, despite a recommendation to do so by the DoJ inspector general in a coming report, House Intelligence Committee Ranking Member Devin Nunes (R-Calif.) told Fox News‘ Tucker Carlson Friday that isn’t the last of it for the fired FBI director.

In fact, Nunes was clear: He believes that Comey will definitely be held accountable for crimes related to the deep state coup attempt against POTUS Donald Trump colloquially known as “Spygate.”

Carlson led off the interview asking Nunes why the Justice Department would elect not to prosecute Comey for leaking classified memos, something he has admitted to doing (in order to trigger a special counsel investigation against the president, which, of course, happened).

Nunes agreed but cautioned that what investigative reporter John Solomon of The Hill actually noted this week in exclusively reporting that DoJ was passing on Comey’s Espionage Act violations is the likelihood of holding him accountable for bigger crimes.

Solomon’s sources, Nunes noted, told him that the IG’s office “made a recommendation” to prosecute Comey. But just because the DoJ declined “does not mean he’s not going to be” investigated further.

“Remember, the U.S. Attorney in Connecticut (John Durham) is taking all of this information in” as he continues, under Barr’s directive, to prove abuses of the FISA court and other actions taken on behalf of the Obama administration and beyond in connection with Spygate, Nunes continued.

Durham “has taken our criminal referrals, for example,” Nunes said, citing referrals he made as ranking member of the Intelligence Committee earlier this year.

Those referrals stem from documents uncovered by Judicial Watch, as we reported in April:

Under the ‘leadership’ of fired Director James Comey, the FBI documents recently released by JW show “evidence of ‘cover-up’ discussions related to” Clinton’s “unauthorized email system within the company that managed it,” WorldNetDaily reported.

Contained within the 422 documents released this week by JW is an email from Platte River Networks, who managed Clinton’s unsecured private email server, from December 2014 that says, “Its [sic] all part of the Hillary coverup operation I’ll have to tell you about at the party.”

Nunes told Carlson that he believes the IG’s referral on Comey will also be given to Durham as part of his wider investigation and, some speculate, as part of a package of indictments at a later date.

“If I was James Comey, I wouldn’t be walking in the cornfields of Iowa yet running for president,” Nunes said.

“I do believe that James Comey will be held accountable, and there’s one other point that is important to make,” he continued — which is, Durham and the FBI agents he manages have the power to compel witnesses to provide testimony under oath — some witnesses who have yet to be interviewed by the IG’s office, which does not have that authority, or Nunes’ committee, which also is limited in compelling witnesses to testify under oath.

“What we want to make sure of is that it’s not just James Comey that gets looked at,” Nunes said, “but this whole fiasco that’s occurred” regarding the entirety of Spygate.

That matches what Solomon told Fox News‘ Sean Hannity on Thursday regarding Comey and the lot of Spygate conspirators:

He’s got a day of reckoning coming, but there is more coming ahead…The more important thing to watch is the ongoing investigation by Bill Barr and what we know about the FISA [application]. They are learning some very troubling information about the FISA process and everyone involved remains under significant scrutiny…

The AG is looking at the possibilities. Can I win this case in New York and if I lose this case in New York, what message does it send that a leaking FBI director got off? If there’s a better case to be made against James Comey, patience is sometimes the better part of prudence.

I think AG Barr and John Durham will be judged on the final product. When Barr, Durham and Horowitz get done, what’s the final outcome?

Solomon responded: “I do agree with you. The sources are telling me to stay tuned. There’s a lot more to come down the pike on Jim Comey. He signed the first FISA agreement and that’s going to turn out to be a fraudulent or misleading document.”