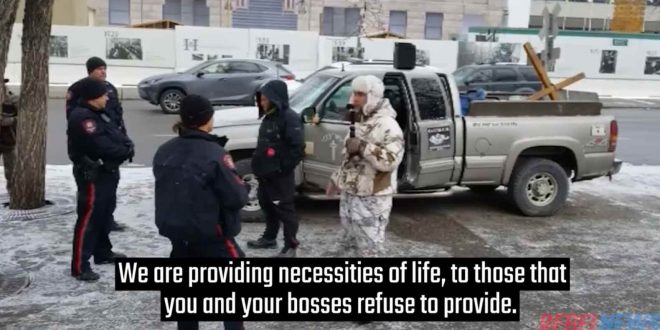 As TFTP reported earlier this month, in an act of “civil disobedience” Dr. Armen Henderson, a medical doctor at the University of Miami, defied the government’s stay at home order to fight the coronavirus pandemic on the front lines — and not in the safety of a hospital. The doctor took to the streets of Miami late last month to provide a much needed service and test the city’s homeless population for COVID-19.

Testing homeless populations has been a key factor in stopping the spread of the virus as homeless people are unable to “shelter in place.’ Many homeless people are said to be carrying COVID-19 but have no way of knowing without access to tests. Dr. Henderson knows this, which is why he defied the order and took to the streets to test the homeless.

During these times, disobeying stay-at-home orders, even with the most valiant of intentions, can be hazardous to your freedom. A pastor in Calgary, Canada just found this out the hard way after he was detained and issued a whopping $1,200 fine — for giving food to those in need during the COVID-19 outbreak.

In times of crisis, like the one we’re experiencing right now, we are at risk of losing our liberties. You may not expect this to happen in your country or province. You might even like your current political leadership. But once our liberties have been confiscated, we cannot take them back, at least without considerable effort.

Artur Pawlowski was feeding homeless people in downtown Calgary when over half a dozen police officers surrounded him and issued him a cool $1,200 fine.

Apparently this gathering was in contravention of new coronavirus lockdown laws, but there were more police officers attending this “crime” than there were alleged offenders.

The sheer insanity of it almost sounds like fiction. The charity was operating outside, which is much safer than any shelter feeding people in cramped close quarters.

That didn’t matter to the police officers, who were acting strangely aggressively to a Christian pastor who was merely feeding the needy.

Since this incident was brought to Rebel News’ attention, we have retained a lawyer for Artur. It’s part of our nationwide plan to fight fines issued by overreaching law enforcement during the coronavirus pandemic.

As the video shows, Pawlowski is surrounded by cops as he feeds the homeless. He is telling them that they “are providing necessities of life, to those that you and your bosses refuse to provide.”

Pawlowski went to point out that there are several other events going on, but the cops were intent on shutting down a pastor feeding the homeless. All the while, they outnumbered the pastor 6 to 1.

“You’ve got all kinds of events happening right now,” Pawlowski said, “and yet, Calgary’s finest are not bothering them.”

During the ordeal, a massive Calgary cop tells a bystander to back up and provide the proper social distancing — by getting in the man’s face and yelling at him. It appeared that these officers had other intentions in mind, other than simply preventing the spread of COVID-19.

As Pawlowski — who has been feeding the homeless for decades — points out, feeding the homeless outside is far safer than congregating them inside packed shelters where the virus could easily spread. However, again, the cops were not interested in this and they still issued him the fine.

Below is a video showing the arbitrary nature of COVID-19 enforcement. No one was made safer by cops issuing a pastor a fine for feeding the homeless.