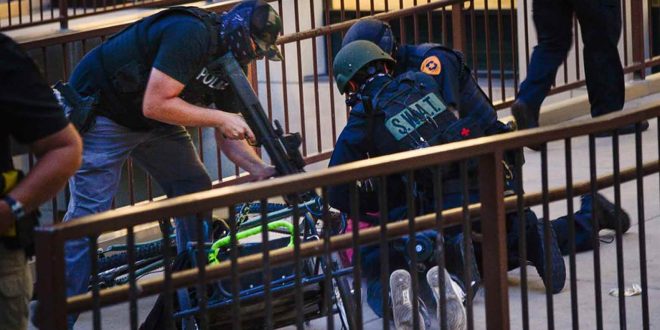 Salt Lake City, UT — There is no shortage of videos depicting police violence against citizens — even when there isn’t a massive uprising happening across the country. However, in the last several days there have literally been hundreds of them. We’ve seen unprecedented acts of violence against innocent citizens by police — who appear to be attempting to kick off a civil war. And, if cops keep acting like the one in the video below, that is exactly what we could see.

A disturbing video from protests in Salt Lake City over the weekend appears to show a police officer shoot a man — who was face down on the ground — with a bean bag round to his back.

According to reports, the department has since opened an “investigation” into the video. Sure thing.

As the SLC Tribune reports:

Salt Lake City police say they’re looking into a video shared widely on social media that appears to show an officer firing a beanbag gun at the back of a man who was face down on the ground with his hands up at a raucous demonstration against police brutality downtown Saturday.

The officer is not with the Salt Lake City Police Department, said Detective Greg Wilking, a spokesman with the agency. But Wilking said his office is working to determine which department employs the officer and will then vet and turn over any complaints Salt Lake City has received.

As the video shows, the officers seem to be attempting to drive back a few of the protesters. A man is then seen in the upper portion of the screen with his hands in the air. The Salt Lake Tribune identified him as 30-year-old Jarod Hartlerode, a homeless man, who may or may not have been participating in the protests.

As the video shows, Hartlerode gets down on the ground, and lies down face first. At this point, the cop, identified only as “psychopath” in the video walks over to him, puts his gun in the man’s back and appears to fire off a round.

“What the f—!” yelled the man filming.

“Hell no!” he screamed. “He just shot him when he was prone on the f—ing ground!”

The video is shot from far away so it is not exceptionally clear as to how it transpired. However, a photographer with the Tribune was closer and took some close up shots.

He’s wearing a police vest with sunglasses, a camo baseball cap and a bandana around his mouth, obscuring his face. The photos show his finger pulling the trigger, his gun pointed near Hartlerode’s back.

If you think the above video is some new level of violence that we’ve not seen yet, 10 days ago, you’d be right. However, this week alone, we’ve reported on absolutely horrifying acts by police officers and military against the citizens of this country.

On Wednesday, we reported on the story of Leslie Furcron, who, according to her family had just buried her son in February after he was killed by police for running from them. They say cops approached him with guns drawn, scaring him, so he ran. Unfortunately, they would kill him over this. Illustrating the level of suffering faced by so many communities across the country, as Furcron peacefully marched to protest the death of her son and police brutality in general, she was shot between her eyes by a cop firing a rubber bullet. It was captured on video.

Also on Wednesday, we reported on how a non-violent, unarmed, and arguably innocent man was practicing his right to free speech when he was pepper sprayed in the face and then shot with a tear gas grenade in his face. That was also captured on video.