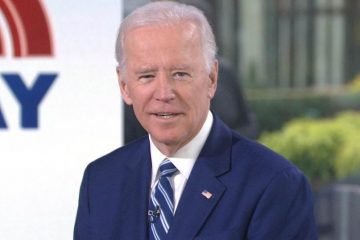 Yes, former Vice President Joe Biden actually answered in the affirmative that his administration will be coming for your guns, America, should he be elected.

In an interview earlier this month with CNN’s Anderson Cooper, Biden was asked, “So, to gun owners out there who say, well, a Biden administration means they’re going to come for my guns?”

Of course, he went on to elaborate on that comment with unconstitutional nonsense.

“You’re right if you have an assault weapon,” he said, actually referencing any semi-automatic rifle, but we all know from that past that his description can apply to virtually all semi-automatic handguns too. “The fact of the matter is, they should be illegal, period. Look, the Second Amendment doesn’t say you can’t restrict the kinds of weapons people can own. You can’t buy a bazooka. You can’t have a flame thrower.”

The term “arms” was specifically used to include any and all arms in the Second Amendment. I would ask Biden, where, in the Constitution, is Congress authorized to restrict weapons? Please cite Article, Section and Clause. You can’t do it, which is why when people actually understood the Constitution, it was perfectly legal to own all sorts of weapons including bazookas and flame throwers. That’s because there is nothing to fear from a law-abiding citizen owning such weapons.

“The guys who make these arguments are the people who say the tree of liberty is watered with the blood of patriots, we need the protection against the government,” said Biden. “We need an F-15 for that. We need something well beyond whether or not you’re going to have an assault weapon.”

Biden is the very kind of person our founders wanted us armed against. They knew they needed modern equipment to hold back a tyrannical beast government such as Biden envisions.

Under Thomas Jefferson, Congress wrote letters of Marque and Reprisal to interject privately owned warship to fight the Islamists in the Barbary Wars. No comment from Biden on that one.

Biden’s interview is chock full of unconstitutional and emotional talk rather than actually appealing to history, our founding documents or the rule of law.

Here’s the interview. There’s more in it and a transcript follows:

COOPER: You’re in support of an assault weapons ban.

BIDEN: I was able to get one passed.

BIDEN: Well, that’s too, but look, here’s a simple proposition. Let’s assume it’s all absolutely accurate. To want to continue it, does anybody think that it made any sense that someone is able to walk into a gun store, buy an assault weapon that has a multiple rounds, or buy an assault weapon that has 100 rounds even though it may not, you can’t point to the fact that it, in fact, stopped it before? Do you want more of them on the street? Do we want to do that?

COOPER: So, to gun owners out there who say, well, a Biden administration means they’re going to come for my guns?

BIDEN: Bingo. You’re right if you have an assault weapon. The fact of the matter is, they should be illegal, period. Look, the Second Amendment doesn’t say you can’t restrict the kinds of weapons people can own. You can’t buy a bazooka. You can’t have a flame thrower.

The guys who make these arguments are the people who say the tree of liberty is watered with the blood of patriots, we need the protection against the government. We need an F-15 for that. We need something well beyond whether or not you’re going to have an assault weapon.

COOPER: So, would you — how do you deal with all the assault weapons that are already out there that people have?

BIDEN: What I would do is — I would try to — I would institute a national buyback program and I would move it in the direction to making sure that that in fact is what we try to do, get them off the street.

COOPER: But that’s not confiscating people.

BIDEN: No, that’s not walking into their homes, knocking on their doors, going through their gun cabinet, et cetera.

COOPER: So people would be allowed to keep the weapons they already have?

BIDEN: Right now, there’s no legal way that I’m aware that you could deny them the right to have purchased (ph) — legally purchase them. But we can in fact make a major effort to make them off the street and out of the possession of people.

COOPER: The — Kamala Harris, one of the things that she says is that within the first hundred days if Congress doesn’t act on gun control efforts or background checks, she would act by executive order. BIDEN: You can, we did that in our administration, act by executive

order, on 30 different executive orders. The problem with that is just an executive order, what happens is the next guy comes along and he wipes it all out, which the president did.

But to say that you need to eliminate the gun show loophole to define what constitutes, I’m the guy that pushed the Brady Bill through the United States Congress when I was chairman of the Judiciary Committee on background checks. You can in fact do those kinds of things, but you cannot, as a matter of executive order constitutionally, say this is what we’re going to do relative to this particular weapon.

ANDERSON COOPER, CNN HOST: I think you said you — I read you said in the past that you had two shotguns. Do you still have two shotguns?

BIDEN: Yes, I do. I haven’t fire them long. The only time I’ve ever used them was when my son was alive, skeet shooting. They’re locked up, though, in a cabinet. Every single person that has a weapon should in fact be required to have them under lock and key. They should be responsible. If you left your keys in your automobile out here in the street and a 15-year-old kid gets in it and gets in an accident, you can be held responsible.

RELATED: BIRTHPLACE OF THE BILL OF RIGHTS WAS JUST DEMOLISHED BY A DEVELOPER

COOPER: You’re not for a federal license for firearms, which some of your Democratic opponents are.

BIDEN: Well, we may get to the point — what we have to do is act right now, though, to make sure we do the things that are within our power. Let’s get these things off the street now, being able to be sold. Let’s move now to deal with thorough background checks. Let’s move now. And the difference is I think the American people now. Look, when the president asked me to put together — former president asked me to put together a series of initiatives related to background checks and executive orders —

COOPER: This was in the wake of Sandy Hook?

BIDEN: Sandy Hook, I was able to do that. The problem was that we ended up in a situation where those executive orders, even the ones that got passed that were very useful that were implemented, were able to be wiped out.

COOPER: So, but some people will look at that and say, well, President Obama put you, you know, in charge of this commission. You came up with ideas. They didn’t pass Congress for the extends — more extensive background checks didn’t pass. If it couldn’t pass then, why would it pass under a Biden administration?

BIDEN: Because the world has changed. People are now aware. What was clear is that you had over 55 percent, 56 percent of NRA members agreeing with the things we put forward. There’s two — we have two real problems. We have the NRA and we have the gun manufacturers. Right now, we’re able to make possible technology to make a weapon that only your biometric on your finger can pull that trigger.

COOPER: Right. You have spoken out in favor of smart weapons.

BIDEN: — what happens now? Well, they develop some of those in terms of pistols, initially. So you have gun stores selling them and what happened? The manufacturers at NRA came and said we boycott those. And so they bought those stores. They took them off the market. We have to take on the gun manufacturers, as well as the NRA. All they’re interested in is selling a weapon, not about safety.

Tim Brown is an author and Editor at FreedomOutpost.com, SonsOfLibertyMedia.com, GunsInTheNews.com and TheWashingtonStandard.com. He is husband to his “more precious than rubies” wife, father of 10 “mighty arrows”, jack of all trades, Christian and lover of liberty. He resides in the U.S. occupied Great State of South Carolina. . Follow Tim on Twitter. Also check him out on Gab, Minds, MeWe, Spreely, Mumbl It and Steemit
(Visited 20 times, 1 visits today)
Share
Tweet
Share
Pin