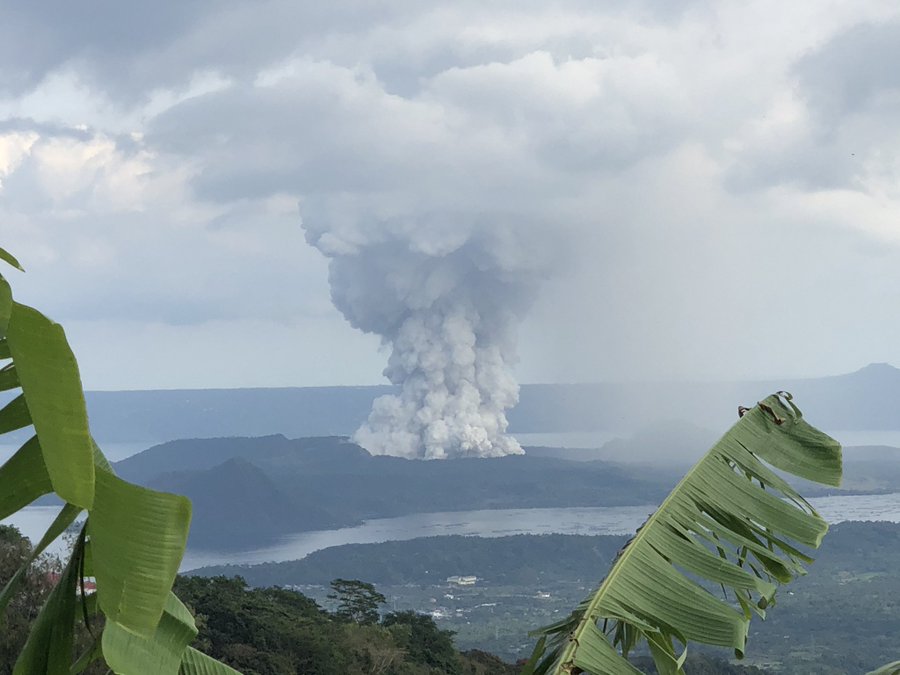 There certainly hasn’t been a lack of seismic activity so far in 2020. Just a few days ago, I wrote about the horrific earthquake swarm that Puerto Rico is currently experiencing. More than 1,000 earthquakes have rattled Puerto Rico so far, and as you will see below, it was just hit by another very large earthquake. But right now volcanic eruptions have taken center stage. In particular, a massive eruption in the Philippines is making headlines all over the world, but what most people don’t realize is that several other volcanoes have also blown their tops in spectacular fashion within the past week. Suddenly, volcanoes all over the globe are shooting giant clouds of ash miles into the air, and this is greatly puzzling many of the experts.

Let’s review what we have witnessed over the past 7 days.

Last Tuesday, one of the most important volcanoes in Alaska shot hot ash 25,000 feet into the air…

Seismicity diminished for a few hours, but it then increased again. During the increase, the volcano spewed an ash cloud to 25,000 feet, the observatory announced. The later eruption increased the volume of ash.

There are 5280 feet in a mile, and so we are talking about an ash cloud nearly 5 miles high.

Then on Thursday, Mt. Popocatepetl in Mexico shot hot ash nearly 4 miles into the sky…

Mexico’s Popocatépetl volcano burst to life on Thursday in a spectacular gush of lava and clouds of ash that hurled incandescent rock about 20,000 feet into the sky.

The dramatic explosion of the active stratovolcano, a little over 40 miles southeast of Mexico City, was captured on video by Mexico’s National Center for Disaster Prevention, CENAPRED.

Those that follow my work on a regular basis already know that I am deeply concerned about Mt. Popocatepetl. It has the potential to create the worst natural disaster in the modern history of North America, because it is quite close to Mexico City. The following summary of the potential threat that Mt. Popocatepetl poses comes from one of my previous articles…

Approximately 26 million people live within 60 miles of Popocatepetl’s crater, and so we are talking about the potential for death and destruction on a scale that is difficult to imagine. In ancient times, Mt. Popocatepetl buried entire Aztec cities in super-heated mud, but then it went to sleep for about 1,000 years. Unfortunately for us, it started waking up again in the 1990s, and now this is the most active that we have seen it ever since the volcano originally reawakened.

Let us hope that Mt. Popocatepetl settles down, because the death and destruction that a catastrophic eruption would cause would be off the charts.

Meanwhile, down in South America the Sabancaya volcano in Peru just shot a plume of volcanic ash approximately 24,000 feet into the air…

But hardly anyone is paying any attention to what just took place in Peru because of what just happened in the Philippines.

On Sunday, Taal volcano roared to life, and it is being reported that the eruption sent “steam, ash and pebbles up to 10 to 15 kilometers (6 to 9 miles) into the sky”.

Can you imagine that?

According to USA Today, ash has already reached Manila, and “red-hot lava” has started gushing out of the volcano…

Red-hot lava gushed from of a Philippine volcano on Monday after a sudden eruption of ash and steam that forced villagers to flee and shut down Manila’s international airport, offices and schools.

There were no immediate reports of casualties or major damage from Taal volcano’s eruption south of the capital that began Sunday. But clouds of ash blew more than 100 kilometers (62 miles) north, reaching the bustling capital, Manila, and forcing the shutdown of the country’s main airport with more than 240 international and domestic flights cancelled so far.

Unfortunately, authorities are warning that the worst may still be yet to come.

In fact, they are telling us that a “hazardous explosive eruption” could literally happen at any moment…

“The earthquakes were strong, and it felt like there was a monster coming out” as in the movies, Cookie Siscar, who had left the area and was relaying a report from her husband, Emer, a poultry farmer, told the Times.

The Philippine Institute of Volcanology and Seismology increased its threat level for Taal Volcano to four out of five, saying that a “hazardous explosive eruption” could happen at any minute

Meanwhile, we continue to see unusual earthquake activity all over the globe.

After already experiencing more than 1,000 earthquakes since the beginning of 2020, Puerto Rico was hit by a magnitude 5.9 quake on Saturday…

For quite a while, I have been warning that our planet is becoming increasingly unstable and that the shaking is only going to get worse.

I know that a lot of people didn’t believe me at first, and that is okay.

After the events of the last few days, perhaps a few more people will start to understand what is going on.

There have always been earthquakes and volcanic eruptions, but for most of our lives we have been able to assume that our planet is generally stable.

Unfortunately, that is no longer a safe assumption.

We have entered a period of time when all of the old assumptions will no longer apply, and everything that can be shaken will be shaken.