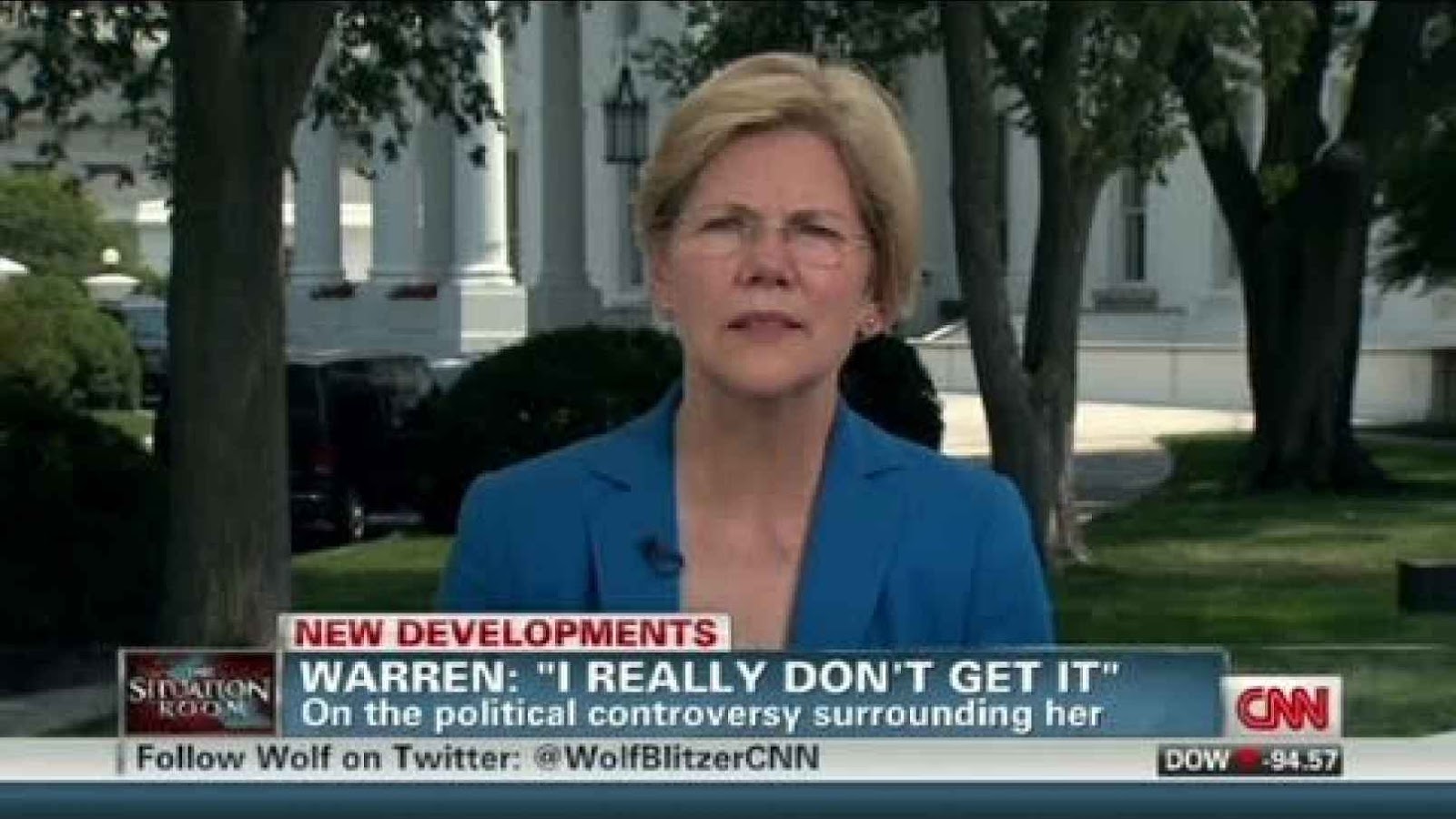 “Is ‘Likability’ in Politics Sexist? Yes. It’s Also Outdated,” the New York Times blared. “The issue with Elizabeth Warren isn’t likability. It’s sexism,” The Guardian bleated. “Elizabeth Warren, Hillary Clinton and the sexist hypocrisy of the ‘likability’ media narrative,” NBC wailed. “Talking About Elizabeth Warren’s Likability is a Way to Tell Women to Sit Down and Shut Up,” the Daily Beast ranted.

Lefties like to believe that the essential elements of human nature, economics, aspiration and biology are outdated, having been disproven by some professor in an obscure TED talk or Marxist tract. Likability was apparently discredited in a panel discussion, but we went on liking people and never realized it.

There’s no surer sign that Warren is walking down Hillary Clinton Boulevard to the ditch of history than that a mere 3 days after she announced her run, her defenders are already accusing critics of sexism.

And it’s even sillier for Warren’s warriors to make the claim than it was when Hillary’s hellions tried to attribute all criticism to sexism. Hillary Clinton was the only major female candidate in the 2016 election. Warren is likely to go up against two other women. And no one is complaining about the likability indexes of Kamala Harris or Kirsten Gillibrand. Nor is anyone comparing either woman to Hillary Clinton.

Likability isn’t sexist. John Kasich and Martin O’Malley are examples of 2016 candidates on both sides of the party line whom no one actually liked. Warren’s likability deficit has nothing to do with her gender. It might have something to do with her role in ripping off asbestos victims while pocketing a tidy sum.

The ‘Hillariness’ of Warren doesn’t lie in their shared fabulism or lack of ethics. There isn’t a Dem front runner in this race who can be counted on to tell the truth for more than 3 seconds at a time. Joe Biden could lie Elizabeth Warren under the table and still dissemble Hillary Clinton to a draw.

Nor is the issue a double standard that discriminates against women who obviously seek power. Warren had been playing it coy until just now, while Gillibrand spent years broadcasting that she wants to run, despite a complete lack of qualifications for the White House, her current job or a job at Starbucks. But no one compares her to Hillary Clinton, even though she actually holds Hillary Clinton’s old job.

A politician, male or female, who doesn’t want power has something important in common with Santa Claus and the Easter Bunny. He or she is a mythical legend that no one over the age of five believes in.

Elizabeth Warren is Hillary Clinton reborn, and they’re both unlikable, because they’re both inauthentic scolds who suffer from hall monitor syndrome. They spent their entire lives breaking every rule they could find while awkwardly fantasizing about running every tiny detail of everyone else’s lives.

Warren and Clinton are both unlikable because you can’t picture either one having any fun. When they boast about carrying hot sauce in their purses or drink beers on livestream, you roll your eyes.

An inability to have fun is a forgivable sin. Joyless people power professions from TSA night shifts to laundromat sock inspectors. But combine that with an obsessive need to monitor, regulate and eradicate other people’s fun, and you have the miserable essence of the progressive movement.

Scolds come in both sexes. America’s greatest scold is the eight-richest man in America who spends half his time trying to force people to drink smaller sodas. That’s why nobody liked Michael Bloomberg when he was trying to ban salt and jaywalking in New York City. It’s why not even Elizabeth Warren voters will vote for him even if he drops his threatened $100 million to come in 32nd in the 2020 Dem primaries.

Scolds are awkward and arrogant. They’ve spent a lifetime navigating the system, but never learned to fake plausible human emotions. They stay up nights afraid that somebody, somewhere is having fun. The only game they know is bureaucracy, and they play it to get the nicest office chairs and ruin the most people’s lives. In Colonial America, scolds burned witches. In modern times, they wipe out lives.

They are convinced that humanity’s problems could be solved by eliminating its bad habit of happiness.

President Trump has been whacking away at Warren because he would love to run against her. All he has to do is brush off the 2016 playbook and swap out email gags with DNA test jokes. And they would connect because nobody really likes her.

Likability has nothing to do with gender. We view people as likable when we think they like us. Even when we might not agree with them politically, we like to think that we could shoot the breeze.

Can you picture anyone shooting the breeze with Hillary Clinton for under six figures?

Elizabeth Warren has a likability problem because it’s hard to imagine her liking anyone. It’s all too easy to imagine her turning that look, which owes nothing to the Cherokee, but much to some dour Swedish ancestors hardened by centuries of exposure to freezing winds and colorless skies, upon us.

Warren, like the authentic hard-core progressive, doesn’t like people. She sees them as problems to be solved. Unlike Hillary, she isn’t animated by a free-floating bitterness and resentment. And probably doesn’t have a flow chart of enemies or voodoo dolls of everyone who ever thwarted her on a shelf.

But hating the human race less than your 2016 candidate does not a 2020 candidate make.

Lefties succeed when they pretend to like people. The best of them, like Obama and Hillary’s better half, are narcissists who thrived on the adulation of the campaign trail. But Warren doesn’t like people. Until recently, she avoided doing interviews. Her campaign debut had the frenzied desperation of careful planning. Unlike her rivals, she avoided people, until she had to grit her teeth and dive in all the way.

There’s never a politician so bad at politics that he or she won’t attract an admirer somewhere. But Warren’s ceiling is of her own making. Enough people told her that she could one day sit in the Oval Office that she came to believe it. And, like Hillary Clinton, she laboriously planned out a political campaign with the methodical relentlessness of a position paper, but with no grasp of people.

Playing the identity politics card is a cheap way of suppressing dissent. But it doesn’t overcome the inherent flaws of a candidate. No amount of sexism accusations made Hillary Clinton a better candidate.

Warren’s resources and organization mean that she will be at this for over a year. When running against two other women, Warren’s constant cries of sexism will seem sillier than Hillary’s. But Democrats will still have to listen to them for over a year. It won’t make Warren any more likable, just more losable.

Daniel Greenfield is a Shillman Journalism Fellow at the David Horowitz Freedom Center. This article previously appeared at the Center’s Front Page Magazine at this link.