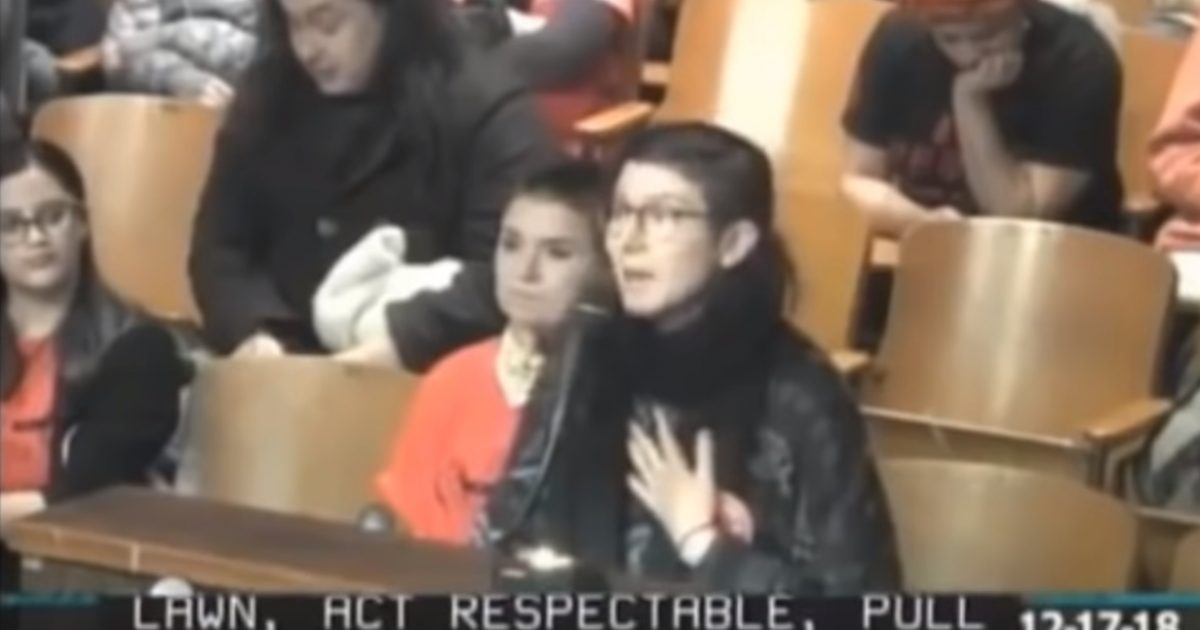 Earlier this month, a university educator told the Madison Board of Education why things like civility, time limits and mowing your lawn indicates you are racist.

Seriously, I truly wonder how someone completed higher education courses and is teaching students with this kind of mental defect in their thinking.

The University of Wisconsin – Madison “educator” said that she teaches her students the alleged “connection” between white liberalism and white supremacy.

In doing so, she sought to provide “working definitions.”

According to this “enlightened” individual, “white liberalism” means “valuing law and order and protocol above the lives of people.”

No, seriously, I don’t know how those things are inseparable. Law and order does value the lives of people, but to this person, they are at odds with one another because she does not know how to think logically or clearly.

“In this room, we see white liberalism and this is just from my students reflections,” she said.

Some of what she claims is white liberalism are things like a “timer” and the calls to “please finish up” when someone’s time is up. Other things include numbers, the sign up process, the stage, the barrier.

“All of these signs suggest that the law and the decorum and the civility of this conversation is actually more important than what is being said,” this white “educator pontificated.

“Another aspect of white liberalism is policing people’s tones of voice,” she continued. “The obsession with civility, refusing to hear black and brown people when they aren’t following white cultural norms of communication.”

“For young people speaking today to you, what they’re saying is a matter of life and death,” she said without providing a shred of evidence for what she is claiming. “I’m not sure what it means to you, but I imagine it’s a combination between a sense of duty, being able to put a line on a resume, feeling like someone needs to take charge, and feeling like you’re the best person for the job.”

“That’s actually where the connection lands between white liberalism and white supremacy because it’s by maintaining law and order and by maintaining civility by keeping your front lawn nice and tidy and by putting that ‘all are welcome in our communities’ sign on your front lawn, you are denying the fact that all the while you are with the other hand passing money to a deadly institution that polices with great disparity and causes tragic, tragic harm to the communities that are our neighbors and the communities that we actually should be building forward with.”

What? What in the world does having a nice lawn and law and order and a sign that welcomes people have to do with any of this? It’s like me saying that this woman took a shower and fixed her hair and put on makeup is somehow racist and detrimental to other ethnic groups. It’s stupid! Who gave this woman a diploma?

“So telling black and brown people to please wrap up suggests that their voices, their pain and their stories are less important than rules and that in and of itself is the place where white liberalism turns into white supremacy is because white supremacy is the accumulation of these aggressive messages that say ‘stay off the grass,’ ‘mow your lawn,’ ‘act respectable,’ ‘pull your pants up,’ right?”

“So, if I was to raise my voice and start using god forbid some swear words to you, I don’t believe that it would be received in quite the same way as it would be if a black or a brown youth were using those swear words so here’s what I have to say ‘fuck white liberalism and fuck white supremacy.'”

Of course, she got applause, but not for the idiocy she just uttered, but for her vulgar use of words at the end because it’s clear from those in the background that they have no idea what she is talking about.

I suppose this “educator,” if she lived according to her own rules would wear hear pants hanging off her rear end, keep a messy house, not abide by the law, fail to act respectable (ooops, she just did that in her last line) and a host of other things. I’ll bet when a crime is committed against her, she calls the police and wants that law she is belligerent against to be enforced. She wants order and justice no matter what ethnicity the person is who committed the crime.

However, my guess is that she follows, for the most part, the very things she is berating. So, what would that make her? Yep, a white supremacist.