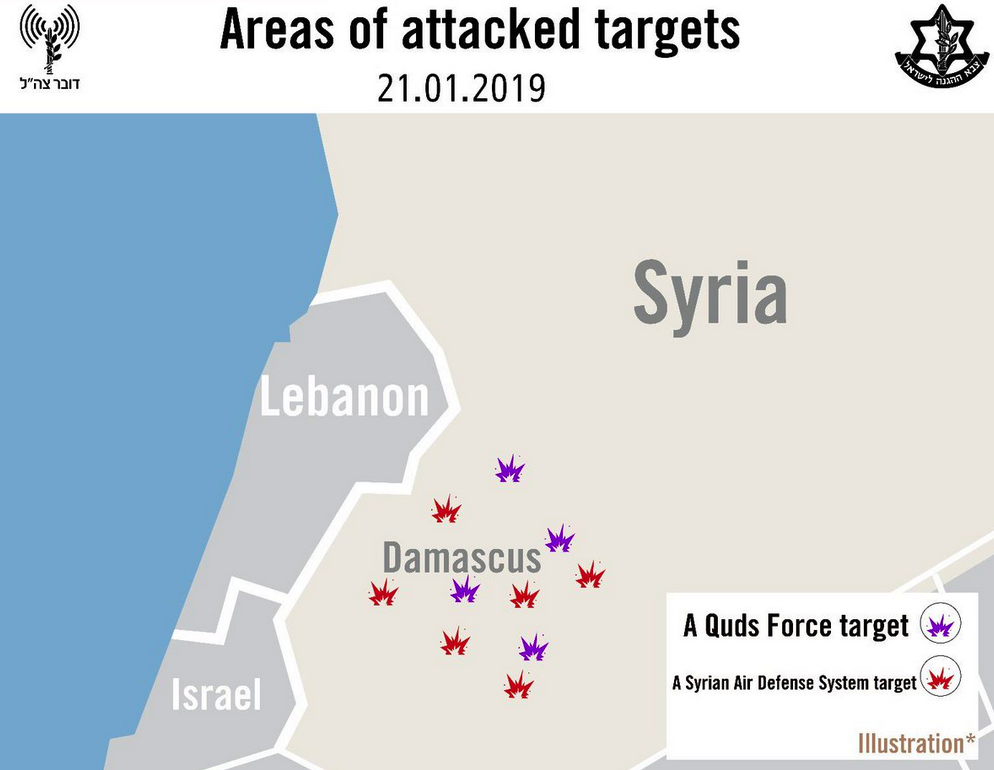 Israel and Iran are edging dangerously close to a state of all-out war. On Sunday night, Israeli forces rained missiles down on Iranian forces based in the Damascus area “for nearly an hour”. According to the IDF, this was a response to “dozens” of missiles that were fired by Iranian forces in Syria toward targets in Israel earlier that day. The Israelis were able to intercept the Iranian missiles, but if any of them had gotten through they could have caused a tremendous amount of damage. Some of the missiles that Israel fired at the Iranians were reportedly intercepted, but quite a few of them did hit their intended targets. If the violence continues to escalate, we could potentially soon be talking about an all-out war between Israel and Iran in which both sides use their weapons of mass destruction.

The missile strikes against Iranian targets in Damascus made headlines all over the globe. According to Syrian state media, there were “consecutive waves of guided missiles”…

Syrian state media cited a Syrian military source as saying Israel launched an “intense attack through consecutive waves of guided missiles”, but that Syrian air defenses destroyed most of the “hostile targets”.

Witnesses in Damascus said loud explosions rang out in the night sky for nearly an hour.

The Syrians are boasting that they were able to destroy quite a few of the Israeli missiles, but independent observers confirm that quite a few Iranian targets were destroyed.

In the past, the Israelis have not always publicly acknowledged their attacks in Syria, but on Sunday night they released an immediate statement…

“We have started striking Iranian Quds targets in Syrian territory,” Israel’s military said in a statement.

“We warn the Syrian Armed Forces against attempting to harm Israeli forces or territory.”

You can see some footage of the missile strikes right here. Among the targets were “weapons warehouses at the Damascus International Airport”…

Targets striked by the IDF, which number at around 10 according to its statement, include weapons warehouses at the Damascus International Airport and in other locations, an Iranian intelligence site and an Iranian training camp in Syria’s south.

Now that the Iranians have been hit so hard, will they respond by striking back at Israel?

If both sides continue to escalate the violence, eventually a “point of no return” will be reached, and then all hell will break loose.

Prior to the IDF missile attacks on Iranian targets, rockets were fired toward the Golan Heights from inside Syria, and Israel blamed those attacks on the Iranians…

The Israeli military said earlier on Sunday that missiles fired toward the northern Golan Heights were intercepted by the Iron Dome missile defense system. It added in a statement on Monday that an Iranian force fired these missiles, but said it holds the Syrian regime responsible for any activity in its territory.

It seems extremely unlikely that this conflict will be resolved any time soon. The Iranians are certainly not going to leave Syria, and they are definitely going to continue to funnel arms and resources to Hezbollah forces in southern Lebanon.

And the Israelis have clearly stated that they are going to resist any Iranian attempts to strengthen Hezbollah or to establish a permanent military presence inside Syria. In fact, Israeli Prime Minister Benjamin Netanyahu couldn’t have been any clearer when he said this to reporters…

“We have a permanent policy, to strike at the Iranian entrenchment in Syria and hurt whoever tries to hurt us,”Israeli Prime Minister Benjamin Netanyahu said.

If a full-blown war erupts in the days ahead, Israel will almost certainly find itself fighting Iran, Syria and Hezbollah simultaneously. Of course Hezbollah is essentially an Iranian proxy, and at this point they have between 130,000 and 150,000 missiles aimed at Israel. When war finally comes, it will be extremely bloody and extremely destructive.

Tonight, we are closer to such a war than ever. The Iranians and the Israelis absolutely hate one another, and now they are firing missiles at one another.

It isn’t going to take much to push the two sides over the edge, and if that happens we are just a hop, a skip and a jump away from the start of World War 3.