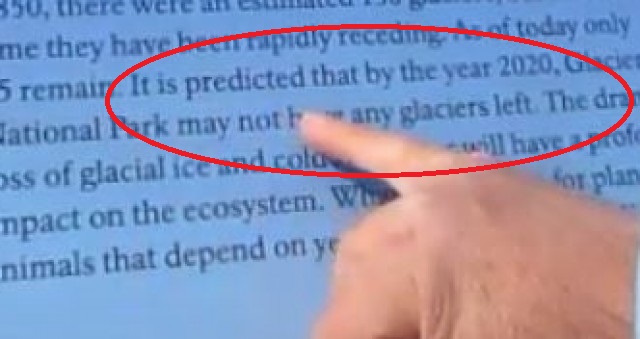 Officials have begun the process of changing out signs in Glacier National Park in Montana declaring that the glacier would be gone by 2020.

Gina Kurzmen, a spokeswoman for the park, said the signs were added more than 10 years ago to reflect the effects of climate change forecasts at the time.

They change will more accurately reflect the fate of the glaciers now, she added.

The new signs will reportedly read, “When they will completely disappear depends on how and when we act. One thing is consistent: the glaciers in the park are shrinking.”

Kurzman said park officials were informed by the U.S. Geological Survey in 2017 that the forecast model for the glaciers’ demise was not accurate.

But the park could not move ahead with changing the signs, she said, due to budgetary constraints.

LMAO! What a ridiculous waste of money fear mongering to appease the climate change lunatics all at the tax-payer expense.

What a freaking mess.

The glaciers will be there for eternity.