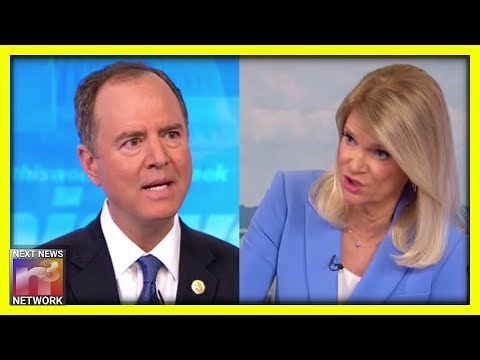 Every once in awhile you have a liberal that is so crazy that even their guardian protectors in the Mainstream Media have to shut them down.

Thus was the case on Sunday Morning when Adam Schiff appeared on ABC.

Even the liberal media is embarrassed of Schiff’s lies at this point.

Adam Schiff tried the usual lie this morning while on ABC with Martha Raddatz, but she wasn’t having it.

Schiff tried to say that the Durham investigation is “tainted” because of political motivation: “This is tainted because of the motivation, which is a political one, to serve the president’s political interests.”

Raddatz pushed back on the statement by Schiff: “You have no evidence of that yet whatsoever.”

It’s was a shocker to have any pushback against Schiff. Even President Trump noticed the fair coverage on This Week with Terry Moran and Raddatz and tweeted out a thank you to them. Moran and Raddatz also reported on the ISIS raid during the show and gave the president kudos on his accomplishment. Fair coverage should be a norm, but President Trump knows that’s a rarity with our media, so he let these two ABC anchors know he appreciates it.

Schiff responded with a ridiculous answer that because President Trump wants investigations into the intl leaders, and now Barr is doing that right now, there is some political motivation:

Read the rest at 100 Percent Fed Up

Schiff is so far off the deep end that even his allies are keeping their distance.

This impeachment farce will surely ruin his career and the careers of many others.

The Democrats are all-in at a high stakes table and they are risking losing everything.

They have bet the entire party’s survival on a fake impeachment circus and things are not looking good for them.