Netflix series “Unbelievable” sets the stage for more unsubstantiated sexual allegations against President Trump in 2020. The promo for 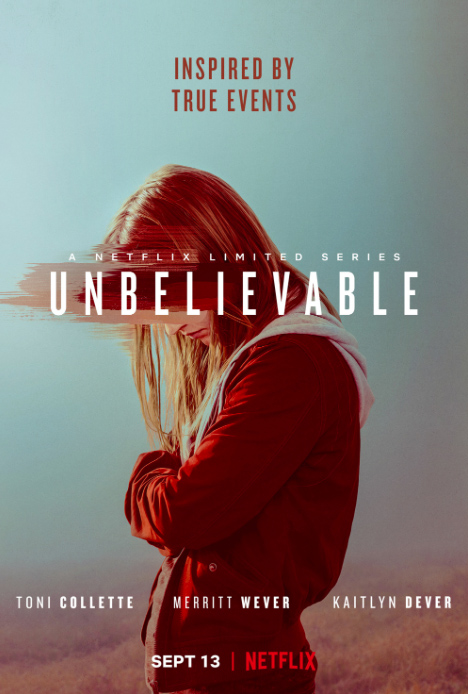 With the regurgitated, debunked sexual allegations against the Honorable Justice Kavanaugh resurfacing this week in the NewYork Times, many believe this is the first salvo in the 2020-character assassination against President Trump. The establishment media reacted swiftly to the NYT article, spreading a tale that even the supposed victim couldn’t corroborate, nor wanted to comment on.

Following on the heels of this already-debunked accusation, NETFLIX has created a series on the story of a young girl who was raped, then victimized publicly and by the court system until she could eventually prove her charges against her attacker.

The story is compelling, but the motive behind this theme is a bit transparent considering the series is essentially a rewrite of a story co-published in 2015 by the notoriously anti-establishment Marshall Project and anti-Trump ProPublica.

The Marshall Project (founded by former New York Times executive editor Bill Keller) focuses on alleged injustices in the US court and prison system but seems to only find villains in the white supremacy side of prison race issues.

After the Charlottesville protests, the Marshall Project solicited input from prison inmates on how President Trump’s now-debunked “pro-neo-nazi comments” affected prisoners. Naturally most took the hint and blamed the president for current racial unrest in the system, even though it has been going on for decades.

Pro-Publica is an online-darling of the uber left, often winning journalism awards for one-sided glimpses into social and political issues. A quick look at ProPublica’s “Trump Administration” section reveals article after article criticizing every policy coming from this administration.

The stage is set–what’s next?

So, now that we have NETFLIX broadcasting a “Believe the victim” series going into the next election, all that is left is a new batch of accusers coming forward, and you can bet they will be better coached than the last floozies paraded in front of the cameras by the likes of Michael Avenatti. Perhaps even the last batch will be given a second look.

The next cast of characters?

In June of this year, ABC News published a list of seventeen “accusers” that had come forward, failing to mention that their stories had been either totally debunked or serious doubt cast on their veracity. With no journalistic ethics at play, what will stop the media from reintroducing each and every one of these women over the next thirteen months?

With Biden sounding more and more like Uncle Joe at Thanksgiving dinner, Indian princess Liz Warren is about to chop up what is left of his campaign with her war axe, leaving her at the top of the heap. It would make sense for the Dems to focus on President Trump’s sexual accusers, so Lizzie can coattail on with the victims and become a real champion of women–something Hillary could never pull off.

Prepare yourselves for the complete unraveling of our corporate media system as they throw everything imaginable against the wall hoping enough sticks to give voters second thoughts about supporting President Trump’s reelection. If they can swing enough female voters over to their side by painting Trump as a callous womanizer, it won’t matter how well the economy is doing.

Footage Captures Shocked Woman Moments After Bear Attack in Her Own Driveway
January 20th, 2022 Flag And Cross
Powered by WordPress RSS Feed Plugin
PowerInbox 5×1
You Might Like