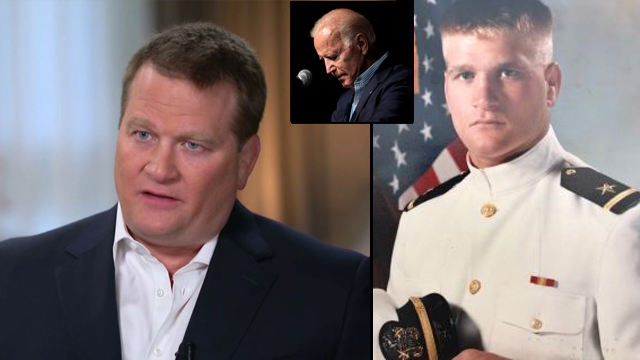 Bobulinski, a Navy veteran, told Tucker he decided to go public after Biden and his allies had the audacity to try and smear him as a Russian agent.

Hunter Biden's ex-business partner Tony Bobulinski: "I remember looking at Jim Biden and saying how are you guys getting away with this? Aren't you concerned? He looked at me, and he laughed a little bit, and said 'PLAUSIBLE DENIABILITY.'" pic.twitter.com/IxbND1IbWV

Tony Bobulinski, a former business associate of Hunter Biden, will tell “Tucker Carlson Tonight” in an exclusive interview Tuesday evening that Joe Biden’s denials of knowledge or involvement in his son’s foreign dealings are “a blatant lie.”

Bobulinski, a Navy veteran and the former head of SinoHawk Holdings — which he describes as a partnership between the CEFC China Energy conglomerate and two Biden family members — told Carlson that he almost walked out of last week’s second presidential debate when Biden discussed the topic.

“In that debate, he made a specific statement around questions around this from the president,” recalled Bobulinski, who attended the debate as Trump’s guest. “And I’ll be honest with you, I almost stood up and screamed ‘liar’ and walked out because I was shocked that after four days or five days that they prep for this, that the Biden family is taking that position to the world.”

Bobulinski has produced texts and documents to back up all his claims. You can see the texts he mentions here, several of which I’ve embedded below.

Tony Bobulinski on Tucker says it is a "blatant lie" when Joe Biden says he had no knowledge of his son's business dealings:

"There was no other reason for me to be in that bar meeting Joe Biden then to discuss what I was doing with his family's name and the Chinese." pic.twitter.com/famy4WaxOk

In Tucker Carlson's interview with Hunter Biden's ex-business partner Tony Bobulinski, they play a tape of Rob Walker, a self-described Biden family representative, telling him "you're just gonna bury all of us" if he went through with his plan to go public on business dealings pic.twitter.com/zbfvaXtw13

The Biden camp is smearing Navy veteran Tony Bobulinski's evidence as Russian disinformation because he blew the whistle on their secret business deals with the Chinese.

Tony Bobulinski: Joe Biden gave “an emphatic no” to “putting proper governance in place” for business with Hunterhttps://t.co/GoF5zaTock pic.twitter.com/FuyIi6bTZf

TUCKER: If Biden is elected, how does this constrain his ability to deal with China?

BOBULINSKI: I think Joe Biden and the Biden family are compromised. I've held a [security] clearance … I just don't see, given the history here, how Joe can't be influenced. pic.twitter.com/2moTCX87yY

Bobulinski said he has been receiving death threats and is currently in hiding:

Tony Bobulinski: “I have a former Seal Team protecting my family… I’m not at home right now.” pic.twitter.com/BoAC5xFxC6

Another leaked audio tape was released on Tuesday of Hunter Biden admitting to being in a partnership with the “Spy Chief of China” and naming his father as a criminal case witness.

Audio evidence of Hunter Biden admitting to being in a partnership with the “Spy Chief of China” and he admits his father knew.

CNN ran with Melania’s “secret tapes.” Will they cover this?

As a reminder, James (aka Jim) and Hunter Biden were connected to an $8 billion Ponzi scheme which Politico reported on last year before Biden was a candidate.

The Biden Crime Family for decades has used Joe Biden’s position in public office to make themselves fabulously wealthy at our country’s expense!

President Trump on the other hand has lost “billions” as a result of winning the presidency, was subject to a deep state witch hunt his entire term in office, got impeached by the Democrat-controlled house over a phone call to Ukraine asking them to look into Biden’s corruption (for which he is now being vindicated) and has Democrats and deep state operatives openly threatening to throw him in prison!